Soi Phet Brings a Bit of Bling to Old Friends 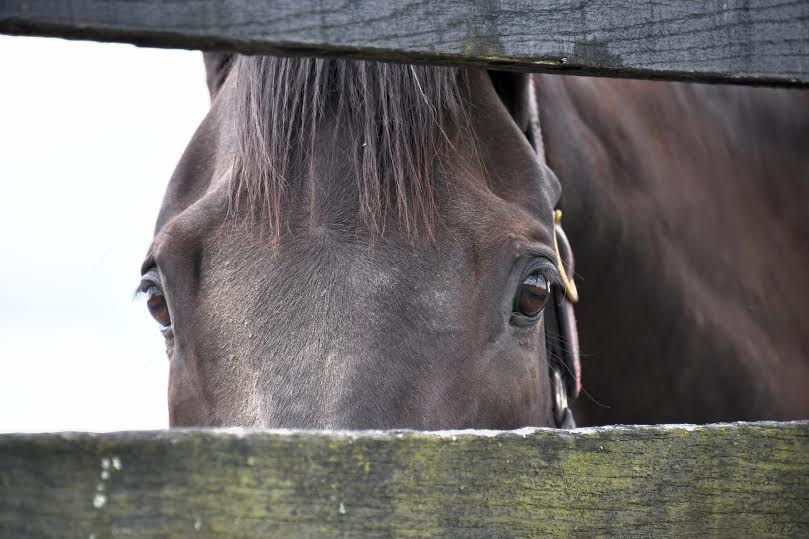 Geologists estimate that, given the extreme temperatures and pressure needed, it takes between one and three billion years for a diamond to fully form.

That’s an estimated 25 to 75 percent of the earth’s age. So, “middle age” for a diamond—the time it takes to begin to become a finished gem—is about 1.5 billion years.

In some parts of the world, notably South Africa, diamonds are commonly discovered and mined. In others, like Thailand, there are none to be found.

Well, save for one strand: Soi Phet, “Diamond Necklace” in the Thai language.

But Soi Phet is not a string of diamond gems; rather, he’s an 11-year-old diamond of a Thoroughbred racehorse recently retired to that gold mine of Thoroughbred retirees, Old Friends in Georgetown, KY.

The dark bay gelding arrived at his new home June 29 following his 64th and final start at Los Alamitos Race Course, near Los Angeles, CA. Bred in The Golden State by ARCHA Racing, the origin of his unusual Thai name is a mystery. But he became very well known to California racing fans and to Old Friends’ Founder and President Michael Blowen.

“I’m such a fan of Soi Phet, and I’m so excited to welcome him to Old Friends,” says Blowen. “We hope all of his fans will visit him here, and we thank (trainer) Leonard Powell and his owners for sharing this great champ with us.”

The son of Tizbud was a diamond in the very rough for the first several years of his racing career. Acquired in claim by new trainer and part owner Powell for a mere $16,000 as a five-year-old in 2013, Soi Phet seemed very much the journeyman racehorse. Then an unusual change occurred to the horse with the unusual name.

“It was the week before his first race with us,” Powell told the Daily Racing Form in 2014. “He became a different horse. Mentally and physically, he was more relaxed. That was different.”

Soi Phet won his debut for his new connections by 10 lengths in an allowance race. He then began to string together a sparkling body of work, winning three consecutive races over the next two months. Moving up in class, he finished third behind eventual Breeders’ Cup Classic winner Mucho Macho Man and Paynter in the 2013 Grade 1 Awesome Again Stakes at Santa Anita that September.

Part-owner Powell took over training duties in 2014 and saddled his new star to victories in the Bertrando Stakes and the Los Alamitos Mile Stakes in track-record time. Soi Phet finished second in three consecutive stakes races under three different trainers in 2015–16 after Powell temporarily relinquished his conditioning role.

Back in Powell’s care for the rest of the 2016 season, Soi Phet was back in winning form in the McCanns Mojave Stakes, the Harry F. Brubaker Handicap and the E.B. Johnston Stakes.

Again under two different trainers in 2017, he finished a consecutive third in the California Dreamin’ Handicap and in that year’s Brubaker Handicap, this time under Bob Baffert.

By now, Powell had learned his lesson. He returned for good to training Soi Phet and to wins in the 2017 E.B. Johnston Stakes and, in 2018, saddled the now-10-year-old to victory in the Bertrando Stakes and the Crystal Water Stakes on Santa Anita turf, becoming the oldest stakes winner in California.

At the time, retirement plan discussions had already been under way for some time between Blowen and co-owners, The Benowitz Family Trust, the trainer’s spouse Mathilde Powell and Paul Viskovich. But he still was very sound and seemed to be enjoying training.

When he ran poorly in his final race, his connections knew it was time to place their diamond necklace in a velvet box.

“It was like he was saying, ‘Okay, that’s enough,'” quips Cindy Grisolia, the media and marketing representative for Old Friends.

Soi Phet is settling in nicely after his pensioning to the Blue Grass of Kentucky, a home he’s never known. He has a new companion, Hogy (HO-ghee, like the sandwich), showing him the ropes and they’ve already become great friends at Old Friends.

“Since he raced mostly at Los Alamitos, we’ve received a great number of messages from West Coast fans wishing him well and thanking Old Friends for providing a retirement home for him,” explains Grisolia.

A diamond is traditionally the gem that expresses eternal love. For the rest of what his racing fans hope will be a very long life, they and other visitors to Old Friends will be able to return that love to Soi Phet.