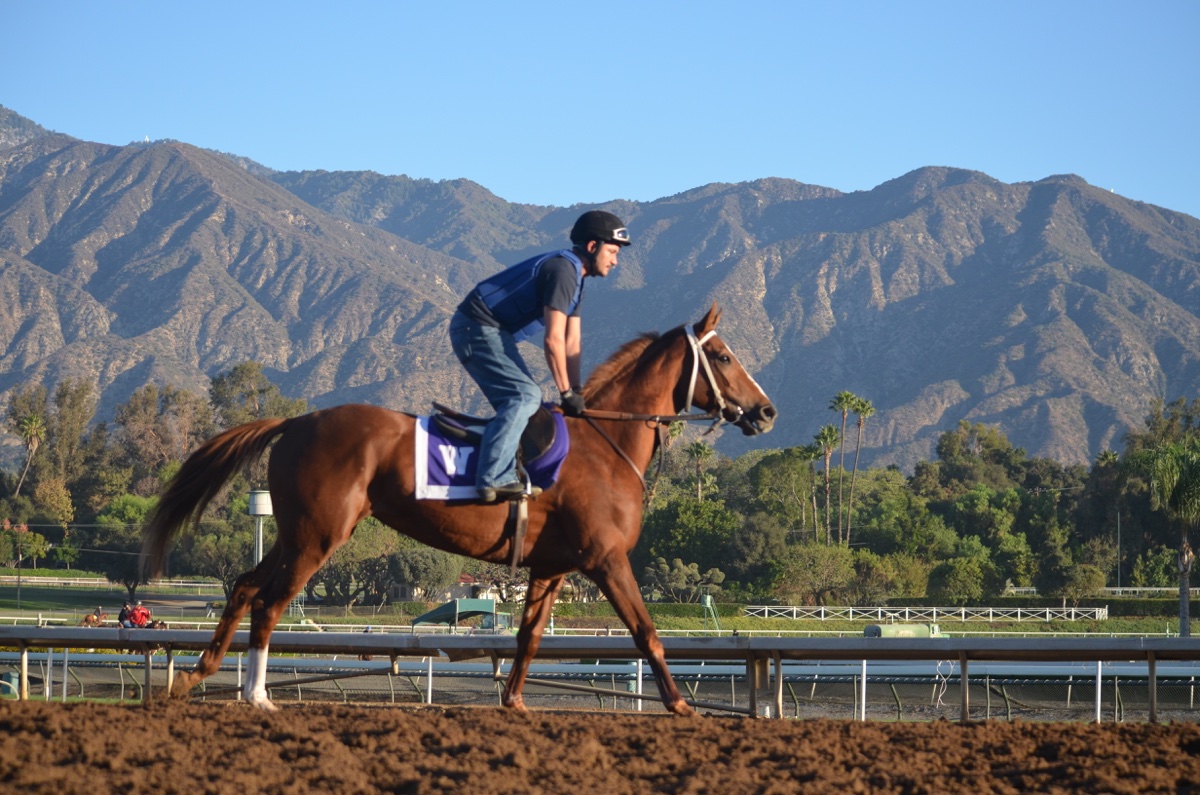 With only six live race days left until the end of a troubled racing season on June 23, ownership and  officials at Santa Anita Park continued to resist calls from the governing board and California State government officials to suspend all racing in the wake of a 29th death on Sunday.

At the direction of Newsom, the California Horse Racing Board (CHRB) along with The Stronach Group will immediately implement enhanced safety measures to further protect horses at Santa Anita.

On Monday, California U.S. Senator Dianne Feinstein called for suspension of racing at Santa Anita for a third time. The pressure then was ratcheted up by a call for closure in a statement issued on Tuesday by Newsom.

“I continue to be troubled by the horse deaths at Santa Anita Park,” said Newsom in his statement. “Enough is enough. I am calling on the California Horse Racing Board to ensure that no horse races until they are examined by independent veterinarians and found fit to compete.”

Newsom’s involvement melted any existing resistance. It was agreed a five-member team, led by CHRB Medical Director Dr. Rick Arthur and Chief Steward Darrel McHargue, will use a specific rubric to evaluate all horses’ medical, training, racing and injury history to determine their fitness to run. The team will be empowered by the dissenting vote of only one member to scratch a horse deemed unfit to run. Evaluations will begin immediately.

“This is unprecedented in American horse racing,” said Alexis Podesta, secretary of the Business, Consumer Services and Housing Agency, which oversees CHRB. “Never have we had this additional layer of review with a team of experts to connect data points and confer on the well-being and capability of individual racehorses. Furthermore, recommendations coming from this team will be the final word as to whether or not a horse races. I expect the industry as a whole will embrace this effort.”

“These are historic safety enhancements,” said CHRB Executive Director Rick Baedeker. “We are taking these additional steps to further mitigate the risk to horses at Santa Anita. The California Horse Racing Board is committed to doing all we can to ensure the safety of the horses there.”

“Horse and rider safety is our top priority at Santa Anita Park, and we remain steadfast in our commitment to making California horse racing the safest and best in the world,” said The Stronach Group’s president and chairwoman, Belinda Stronach. “We look forward to working with Governor Newsom and the California Horse Racing Board as they implement this additional layer of review through the end of our current meet.”

The CHRB oversees all live racing at California tracks, but in itself does not have the authority to cancel or suspend racing at the track, a shortcoming the formation of the new team will remedy.

The CHRB called earlier for a suspension of live racing but was rebuffed by Santa Anita’s owners, The Stronach Group, as well as Park officials and some horsemen in its own previous statement issued Monday following the 29th death Sunday.

“We are collectively working on behalf of everyone in the sport—grooms, hot walkers, jockeys, exercise riders, starters, trainers, owners, track managers and every horse wearing a bridle and a saddle—to reform and improve racing every day,” read The Stronach Group’s statement. “After extensive consultation among all partners, Santa Anita Park will stay open through the end of its meet to see these reforms through.”

Reforms instituted at Santa Anita after the 22nd death during the meet that began Dec. 26 include a ban on the race day anti-bleeding medication furosemide, commonly branded as Lasix or Salix, as well as restrictions on the use of whips by jockeys. Ownership also promised investment will be made in equipment to better diagnose potentially dangerous existing conditions in horses prior to their being allowed to race, a reform that has not yet been instituted.

The issue has become a lightning rod among racing fans. Defenders of keeping the Park open for racing often point to the number of jobs tied to the racing industry, a point noted in the initial Stronach statement.

Other defenders not affiliated directly with the Park, particularly fans posting on a number of prominent horse racing and related sites, claim People for the Ethical Treatment of Animals (PETA) has been behind the call for closure. PETA has long opposed horse racing, but earlier in the controversy issued a statement applauding the initial reforms enacted as a “first step” in addressing the sport’s problems.

Earlier in the meet, deaths were primarily euthanizations from breakdowns occurring on the main dirt track, which replaced the artificial Pro-Ride synthetic surface in 2010 after issues resulting in horse breakdowns were reported on that surface. Track defenders have pointed to unusually high rainfall during this year’s California winter as the potential cause.

Others cite the common use drugs like furosemide as well as bisphosphonates, drugs used to aid the treatment of bone loss, as “hiding” potentially serious physical defects. Still others cite cruelty in the unregulated use of whips in racing in the U.S.

Recent deaths have occurred from assorted other causes including heart attack, a broken pelvis and broken shoulder. These causes for some underscored the need for mandatory pre-race physical testing of all horses.

The problems initially came to wide public attention with the breakdown of Breeders’ Cup Champion Battle of Midway Feb. 23. The horse’s ownership was criticized for bringing the horse back from last year’s retirement from racing after he proved only “somewhat fertile” as a stallion.

A comprehensive list and details for each of the first 21 fatalities between Dec. 26 and Mar. 6 was published in the Los Angeles Times. Details of the more recent eight deaths are available from a variety of sources. During the current meet, horse deaths at Santa Anita are more than double the rate nationwide.

Owners and officials at the Park were no doubt reluctant to close due to pressure because Santa Anita is slated to host the Breeders’ Cup World Championships Nov. 1 and 2. The pre-race evaluation reform instituted Wednesday may in part be due to concerns the Breeders’ Cup might be moved.

Officials at the Park face something of a Sophie’s Choice. If they suspend remaining race days, it would seem a concession to the belief that racing there is indeed unsafe. However, if breakdowns or other deaths occur during the Breeders’ Cup, which annually hosts the world’s most elite racehorses and is broadcast worldwide by NBC Sports, Santa Anita—and U.S. horse racing—would come under even more severe public criticism and closer governmental scrutiny.

Officials at Breeders’ Cup have said repeatedly that its plan to hold the two days of 14 races remains unaltered. Horsemen worldwide have been silent, but it is possible many may refrain from sending their prized, expensive charges if the Breeders’ Cup remains at Santa Anita this year. The enhanced safety measures may in part be directed to that audience as well.

The issue comes during a particularly troubling year for the sport. Its Triple Crown—the Kentucky Derby, Preakness and Belmont Stakes—got off to a difficult start when, for the first time in history, the winning horse, Maximum Security, was disqualified just after the race for what stewards determined was interference.

The disqualification occurred on a muddy track, the fourth consecutive year the Derby was affected by rain, and raised ire among many fans, both at Churchill that day and ever since. It was only the second disqualification in the race’s 145-year history (Dancer’s Image was disqualified four days after the 1968 Derby for violation of then-existing drug policies). Country House, running outside and unaffected by the turmoil was declared this year’s Derby winner.

The Preakness, held for the 144th time at historic Pimlico Race Course in Baltimore, came off with no problems, but underscored the controversial Kentucky Derby stewards’ decision  when it was won by War of Will, the horse deemed most affected by the Derby interference.

War of Will finished last in the Belmont Stakes, perhaps putting the Derby controversy to rest since many would have claimed the horse could have been racing for a Triple Crown given a fairer chance to win the Kentucky Derby.

The Preakness also faces a continuing controversy. Many legislators in its home state of Maryland are seeking to move the race to Laurel Park from its forever home at Pimlico, also owned by The Stronach Group, citing infrastructure problems for both horses and fans at the facility. A large portion of the grandstand was cordoned off this during this year’s Preakness due to safety concerns.

The conclusion of the current meet at Santa Anita may temporarily end controversy over that site, particularly if the enhanced safety measures halt the deaths. Further horse injuries or fatalities make it certain concern will be rekindled, both regarding Santa Anita and horse racing in the U.S., as the Breeders’ Cup approaches.