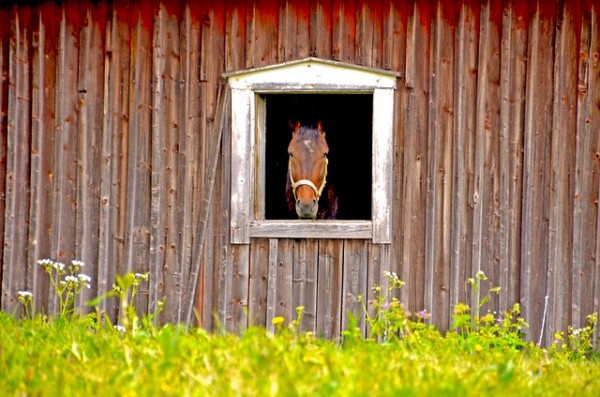 You had to know that if there’s a type one wound, there’s also a type two wound.

Type two wounds are the wounds that make people nuts, probably because healing of them, although generally inevitable and often quite satisfactory, requires a commodity that is often in short supply: patience. 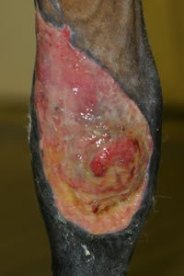 Now here’s the thing. Even in wounds where you can’t immediately put the skin edges back in touch with each other, you’ve still got one thing working for you; the horse’s body wants to heal the wound. So, since things are going to be headed in the direction that you want them to go anyway (healing), when it comes to taking care of a Type Two wound, all you need to do is work with the horse’s body (not against it) to make sure that healing gives you the best outcome possible, both cosmetically, and functionally.

With Type Two wounds, the healing process is a little longer than Type One wounds, since the skin cells that were so happy to be reunited by the sutures used to close Type One Wounds are, sadly, never going to see each other again in Type Two wounds. So, instead of the skin cells joining back up, and the wound healing relatively quickly, as happens with ole #1, you have a bit of a more involved process.

When it’s broken down that way, Type Two wounds don’t seem like that big a deal, right? But let’s discuss each of the steps a bit more, shall we? 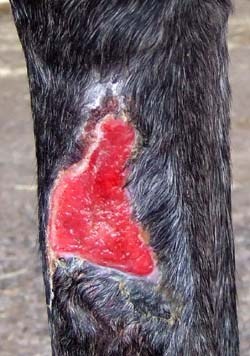 A healing Type Two wound with 1) A nice pink bed of granulation tissue, and 2) A light pink rim of skin cells growing in from the sides

If you don’t pay attention to the Type Two wound, the granulation tissue can just grow like crazy, and result in a “problem” that seems to strike fear in the heart of every horse owner: proud flesh. I’m going to devote my next wound article to proud flesh (and edit this sentence out of this article after I do), but suffice it to say that:

#2. As the wound fills up with granulation tissue, skin cells from the side start growing over the wound. It’s a quite remarkable process, really. The growth of the cells from the sides of the wound can be noticed by the appearance of a thin pink line, a line that grows thicker as the healing process grows on.

A Type Two wound must be filled with granulation tissue before the skin cells can cover it. Conversely, if the wound has too much granulation tissue (that is, if it’s got proud flesh), the skin cells can’t cover it. But, honestly, the process usually works out pretty well, particularly if you, under the direction of your veterinarian, stay out of the way, and provide proper assistance, as necessary.

#3. Wound contraction is the coolest part of the whole process. (At least, that’s what I think. To be brutally honest, none of the wound healing texts with which I am familiar talk about any part of wound healing being “cool.”) Wound contraction makes the wound smaller, and it happens almost overnight, after the wound has filled with granulation tissue. The granulation tissue has muscle fibers in it, too, and once the wound has filled, those fibers contract, and pull the edges of the wound closer together. One night you’ve got a two inch gap in your horse’s wound; the next morning, bada bing bada boom, you’ve got a half inch gap. See, I told you the body tried to heal itself. 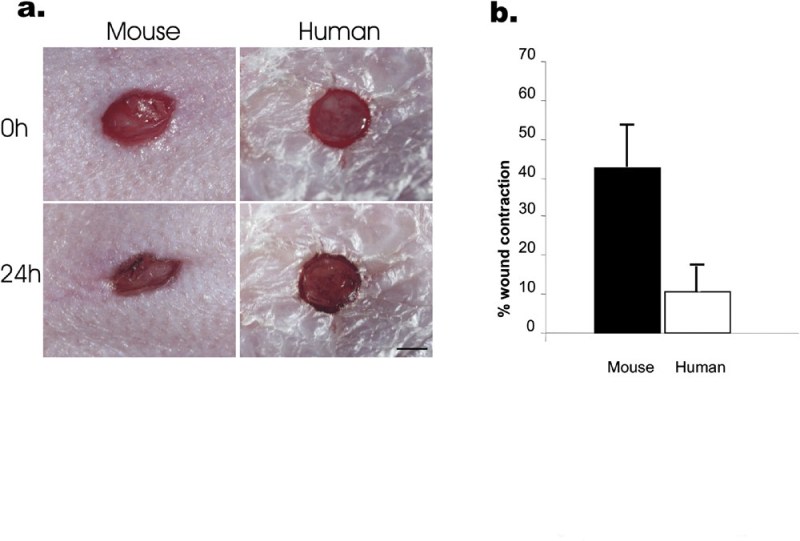 Wound contraction in mouse and human skin wounds, at 24 hours.

#4. Once the skin cells have grown all the way across the contracted wound, the type two wound has healed. Unfortunately (sort of), your horse will be left with a scar.**

Scar tissue isn’t normal skin. Skin is more than just skin cells—it has hair follicles and sweat glands and oil glands and all sorts of other things that makes skin the delightful covering that it is. Scar tissue lacks all of that. It’s functional, but not necessarily pretty. But that’s OK, because it’s the best that the horse’s body can do, and no amount of coaxing, lasering, putting on grease, or anything else will make it look like normal skin, or grow hair (so don’t bother).

So that’s pretty much it. The speed with which your horse’s type two wound will heal depends mostly on the size of the original wound (barring any complications). Instead of a couple of weeks for healing with a Type One wound, you’re generally looking at least a couple of months for a Type Two wound. You’ll often even be able to ride your horse while the wound is healing, which is not cruel. (I mean, really, would you sit on the couch for days and days just because you had a cut on your arm?)

The bottom line is that with a very little bit of care, Type Two wounds will heal, and everyone will be happy, including your horse. As long as you feed him, of course.

* If you make occasional trips to the plastic surgeon or dermatologist to get your wrinkles injected, you may recognize collagen as the name of the protein that gets injected. Don’t worry—I’ll never tell.

** I say “sort of” because while you may not like the appearance of a scar on your horse’s body, your horse won’t care, and his friends won’t make fun of him. So, really, the scar is mostly unfortunate to you, and, hopefully, you’ll be able to learn to turn it into a nice conversation starter about your heroic efforts to heal the horse and your brilliant veterinarian (he or she would appreciate being included).