A Veterinarian’s Guide to Treating Type One Wounds 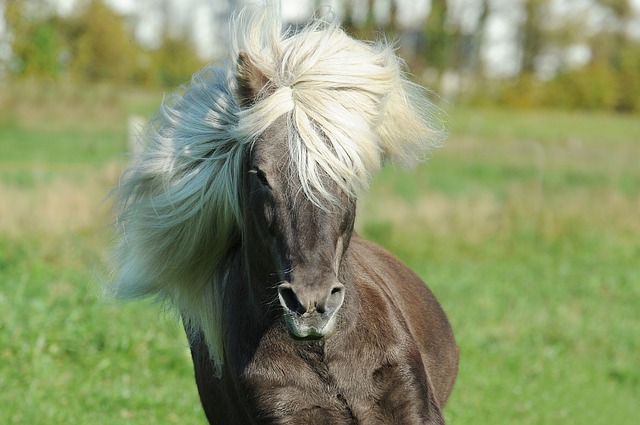 They say that there are two kinds of people in life—lumpers and splitters.*

Lumpers like to put everything into one box. So, to a lumper, any time that a horse opens his skin, it is just a cut, a wound, a laceration, or a boo-boo, or something like that.

Splitters like to break everything into categories. Medicine is full of splitters. So is accounting. And, to be honest, splitting things up into categories does help one sort things out a bit. So, without doing too much splitting, I’m going to break wounds into two categories, and talk about them in separate articles.

BRIEF ASIDE: The splitting persona can be a bit predictable. Splitters like to name their categories, and they name them logically. So, since there are basically two types of wounds, they get named Type One and Type Two (or they heal by “first intention” and “second intention.” Splitters also apparently named many of the snakes of Australia, giving brown snakes that live in trees a name like “Brown Tree Snake,” or a python with a black head, the “Black-Headed Python.” Splitters are not necessarily the most creative group.

Anyway, type one wounds, or, to use the medical vernacular, wounds that heal by first intention, are the wounds that can be sewn up. As any keen student of anatomy knows, skin is intended to keep the outsides out and the inside in. In fact, it’s so important that the late, great comedian and songwriter, Allen Sherman (Weird Al, way before Weird Al) wrote a song about it.

As you may know, if you’ve had a horse for more than, say, five minutes, horses can be somewhat accident prone. As such, there seem to be endless opportunities for them to cut themselves, on bolts, hinges, stall doors, clips, waterers, feeders, small screws, fences, butterflies, etc., etc. In many cases, it seems like horses are looking to get cut, say, on the small, protruding head of a nail that isn’t sticking out enough for a fly to land on, but can cause a five inch slice on your horse’s rib cage. So it goes. Surgeons routinely cause type one wounds when they are doing a colic surgery, making a long type one wound through the skin of the abdomen. 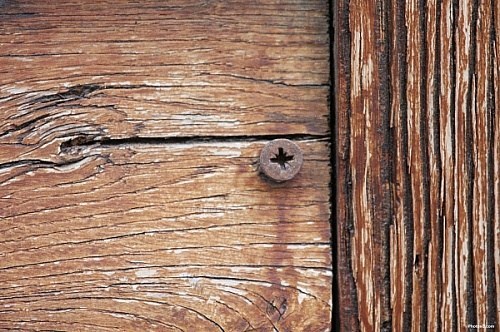 ASIDE: Skin heals from side to side, not end to end. The length of a wound is impressive for its size, and can give you a large number of sutures that you can wow your friends with, but otherwise, the size of the wound is pretty much irrelevant.

Anyway, once the skin has been opened, the clock starts ticking. After the cut, you’ve got about six hours to reintroduce the edges of the skin to each other. Normally, the skin provides a very effective barrier to wood shavings, feces, urine, dirt, bacteria, and all of the other wonderful things that exist in the horse’s environment; when the skin splits open, all of those things that are supposed to be outside get exposed to the inside. That’s not a problem for a few hours—these things sit on the wound surface, and contaminate it.

Contamination is not that big a deal. Your skin is contaminated (that’s not an insult, it’s just a fact). You can wash much of the contamination off of your skin (as you encourage your child to do before eating). Your skin is not unhappy being contaminated, and neither is a wound, at least not initially. That’s where the six hour “golden period” comes in. 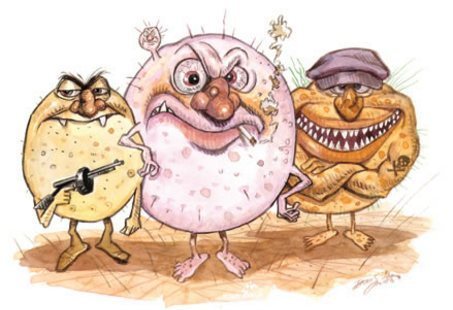 After six hours, all of the bugs (mostly bacteria) that live in the environment being to populate the new wound. Wounds are pretty wonderful for bugs; they are warm, and moist, and have lots of nutritious fluid in them. After six hours (give or take—it also can depend on the circumstances and the location of the wound), the contaminated wound becomes infected and healing can become more problematic (but certainly not impossible). These wounds then become type 2 wounds, which I’ll write about in another article, coming soon.

So, with that background, let’s say that you’ve just put your horse back in his stall/corral/pasture, you’ve gone to get a bit of hay, and you come to find that he’s got a fresh cut on his leg. Here’s what you do.

1. Clean it gently with something that you’d use to clean your own wound

Many authorities say that hydrogen peroxide is not your best choice, but it bubbles when you put it on a wound, and some people apparently remained impressed by the show. A quick spritz of the wound will do, and a garden hose works just great. You don’t want to soak it, and get the tissue water-logged. Don’t worry too much if you don’t have the newest, properest, most attractively packaged, expensive, spray bottle of miracle water or disinfectant, unless you just need to lighten your wallet. Just clean it off a bit, like when you are getting the magazines and bills off the kitchen table prior to dinner.

2. If it’s bleeding, put some pressure on it assuming that you’re not likely to get killed in the process

Direct pressure is a great way to stop bleeding; trying to put pressure on a wound of, say, the lower hind leg can also be a great way to get kicked. Horses have LOTS of blood (say, 50 liters in a 1,000 pound horse), and it’s better for there to be an extra pint on the ground than it is for you to get to ride in an ambulance.

If you can, put a bandage on the wound. By covering the wound, you’re trying to keep more of the outsides from getting inside. There are lots of wonderful gauzes, pads, and bandages that can help you. Shirts, towels, socks, bandanas, and pants legs can also be used in a pinch.

4. Don’t worry about putting a lot of stuff in the wound

It will have to be cleaned out before the wound can be repaired. Mostly, you’ll just make a mess.

If a wound can be sewn up, he or she will be the one who can do it. 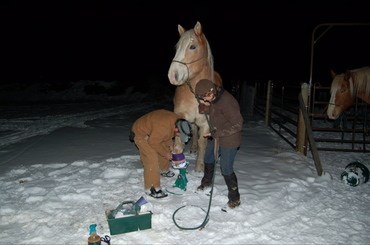 An example of the often-ideal conditions under which veterinarians get to sew up wounds.

From a repair standpoint, repair of type one wounds is rather mundane (but pretty interesting. If you’re really into reading about wound repair in detail, that is, if you’re really a splitter, CLICK HERE). Your veterinarian will get the wound ready to be repaired, and then reintroduce the sides of the wound to each other. The edges will be held in place by stitches (sutures). If the wound is deep, the deep tissue will be gathered together by stitches that will dissolve on their own, and then the skin will be brought together. And, somewhat miraculously, actually, skin cells will grow across the wound, link hands, celebrate the fact that they’ve been reunited with their neighbors, heal, and, with any luck, your horse will have a relatively small scar, which will then get covered by hair.*

6. Make sure you take care of the wound in the way that your veterinarian suggests

With a proper bandage, protecting the wound, etc. That said, it doesn’t matter much what you put on the wound.

7. Get the stitches taken out in a timely fashion, usually about 10–14 days, depending on where the wound is

Don’t leave them in longer than that, because the stitches themselves make little wounds, and the longer you leave them in, the bigger the scar that your horse will end up with (he won’t care, but you will).

That’s pretty much it. Type one wounds that heal properly tend to make everyone happy. The wound looks good quickly, heals quickly, and the horse is back to normal quickly. You don’t have to fret too long. Your veterinarian looks good, and you’ll be likely to call him or her again (which makes him or her happy).

Unfortunately, not all wounds are type one wounds that heal properly. We’ll get to those in another article.

*The “they” in this case, was apparently none other than Charles Darwin, who used the terms in a letter that he wrote to a friend in 1857. I did not know this prior to writing this article, but, knowing me, I probably won’t forget it anytime soon, and, in fact, I hope to be able to use that fact at a party sometime. If you really want to go over the top, you can read about splitters and lumpers here.

*No matter what you put on the wound, it will not cause it to grow hair. For example, if bacon grease caused horse wounds to grow hair, bald men throughout the world would line up after breakfast to slather their heads from from the fry pan. Nothing grows hair on wounds if the wound won’t grow hair back anyway—give up the idea.