A full field of 14 horses will enter the gates at Churchill Downs at approximately 6:05 pm EDT to compete in the 35th running of the Breeders’ Cup Classic.

The favorite and the second choice have journeyed from sunny Southern California, another from Florida. The third choice, a converted-for-this-race sprinter, will come from New York as the richest New York-bred in history. They come from faraway places like Ireland and Japan and from places with exotic names like Dubai and Qatar, places many of their fans may never see.

They all are stars in this and in their home countries, most with Facebook pages and some with fan clubs. Because of their accomplishments, anyone of them could win and none will face odds greater than 30-1.

But the odds on getting to that starting gate in the Breeders’ Cup Classic were far longer—closer to infinity-1—for one horse, and particularly for the man who serves as both his owner, trainer and biggest fan.

Discreet Lover has no business being in a starting gate at 6:05 pm this evening, nor Uriah St. Lewis in the owner’s box at post time, though he’s more likely to be found among fans cheering on his favorite horse. Theirs is the feel-good underdog story of this year’s Breeders’ Cup and perhaps of this year in horseracing.

But let’s begin near the end of the story, Sept. 29. That was race day at Belmont Park in the $750k Jockey Club Gold Cup, a G1 classic 1 1/4 mile dirt race in its centennial running. Seven of the previous 14 contests were won by horses with at least one Triple Crown race win. Man o’ War won this race in 1920 against the only horse entered against him, Damask, winning by 15 lengths. Eventual 1997 BC Classic winner, legendary Skip Away, set the race record that year with a blazing 1:58.89, faster than Secretariat’s Kentucky Derby record at that distance in 1973.

So historic and important is this race, it comes with an all-expense paid berth in the Breeders’ Cup Classic as part of its “Win and You’re In!” Challenge Series. Only three horses won in consecutive years: the great Curlin, Tonalist and Flat Out early in the last century. Last year’s winner, Diversify, entered this year’s contest as the favorite and was expected to join them. A rejuvenated Mendelssohn and Dubai World Cup winner Thunder Snow seemed his only obstacles. But Mendelssohn was last in the Kentucky Derby and Thunder Snow refused to run last year in the same race. Easy peasy.

The race began as expected with the speedy Diversify trying to run away from the field. But Mendlessohn returned to the tactic that resulted in a runaway win in the UAE Derby and engaged the leader stride-for-stride, never more than a 3/4 length behind, each running ridiculous speed fractions while leaving the field binoculars-lengths away.

Discreet Lover was in 7th place in the eight-horse field, 20-some lengths in the rear. So unknown was he that the Belmont track announcer repeatedly called him as “Discreet Image.” Mendelssohn pressed Diversify into the stretch. Thunder Snow rallied, making up lengths around the second turn into the stretch, and challenged for the lead as Diversify fell away and Mendelssohn took a brief lead.

No one knows where the horse came from. Now properly called as Discreet Lover, he passed an exhausted Mendelssohn and held off the thundering Snow for a photo finish win and this precious gate. Mendelssohn held third. 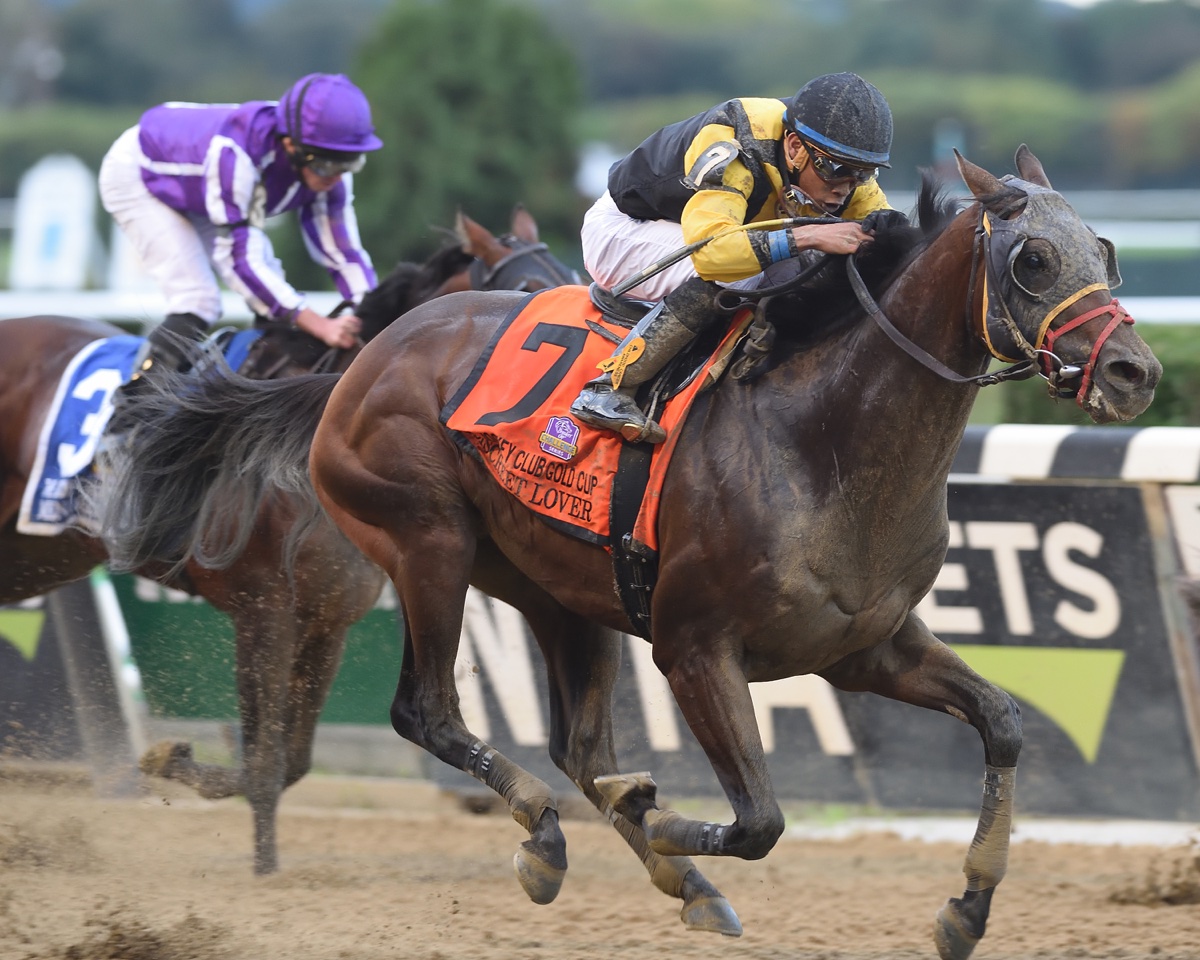 The win shocked the racing world. Well, everyone connected with the racing world except owner/trainer/biggest fan Uriah St. Lewis. He had put $100 on his nose. Discreet Lover, a 45-1 moonshot returned the trust with a $93 payout on a $2  bet. 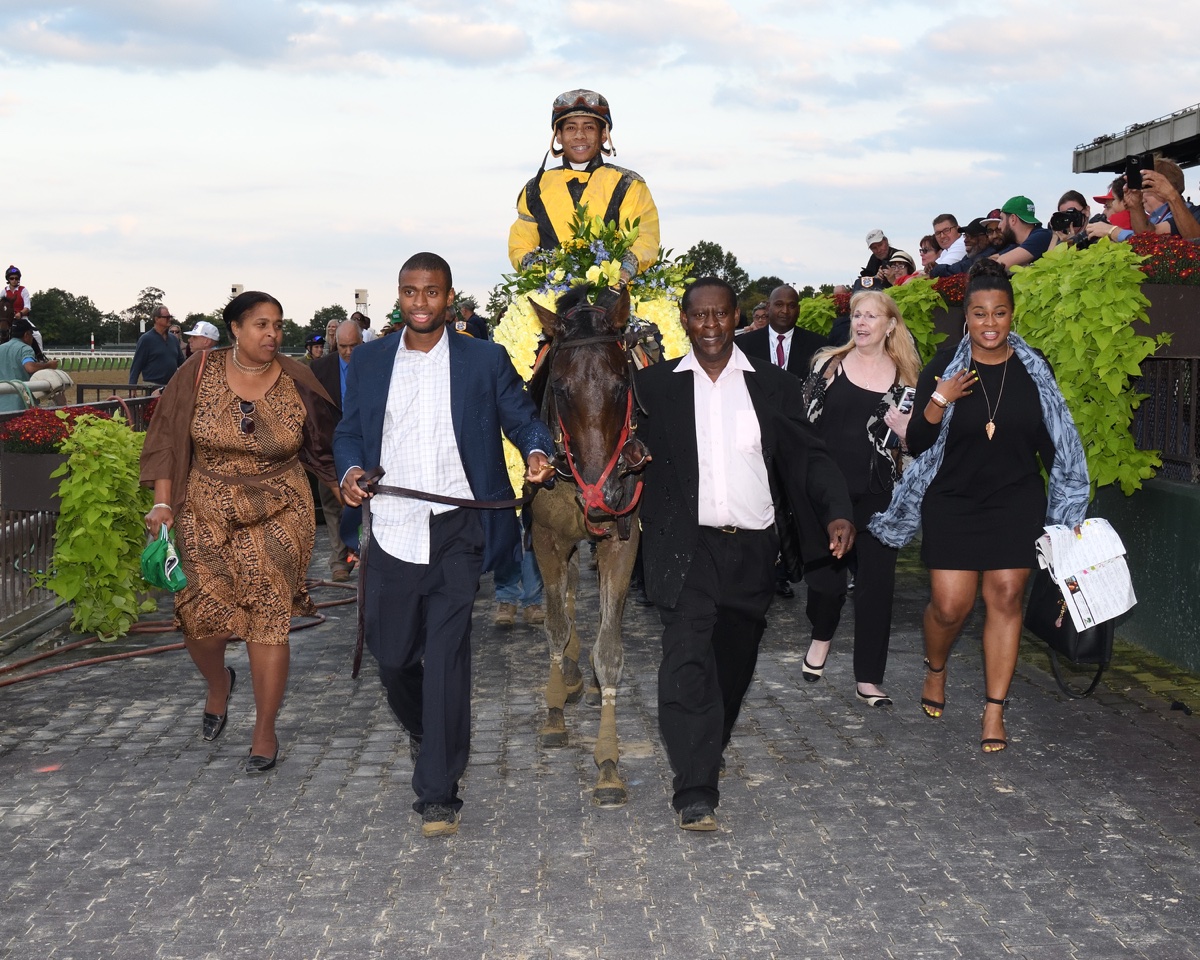 St. Lewis is 60 and was born in Trinidad. He and his wife own a string of 28 horses stabled at his home base, Parx Racing near Philadelphia, where he has been a trainer since 1988. Parx is known mostly for hosting the Pennsylvania Derby, a popular BC prep, in late September along with The Cotillion, its filly counterpart.

St. Lewis never budgets more than 25k for his purchases and, for the most part, it shows. Though he’s been rubbing elbows and horsemen’s stories this week with trainers who have been in the Winners Circle thousands of times after prestigious wins at famous racetracks around the world, St. Lewis has a scant 376 wins over a 30-year career, only one of them a graded stakes win before the Jockey Club Gold Cup win.

So obscure is the trainer that, after his shocking win at Belmont, reporters were clamoring for winning jockey Manny Franco. Even at his Parx home base, he is sufficiently obscure—some might say disrespected—that one of his horses drew odds of a typo-alert 238-1 in the 2016 Pennsylvania Derby.

He is used to looonnnggg odds. As is Discreet Lover. The 5-year-old had gone into the starting gate 44 times before the Jockey Club Gold Cup and had all of a 7-7-7 record to show for it. Only one was a G3 win though he had run in over 30 stakes races. He had entered the gate as a 20-1 longshot 20 times, eight times between 20-1 and 49-1. 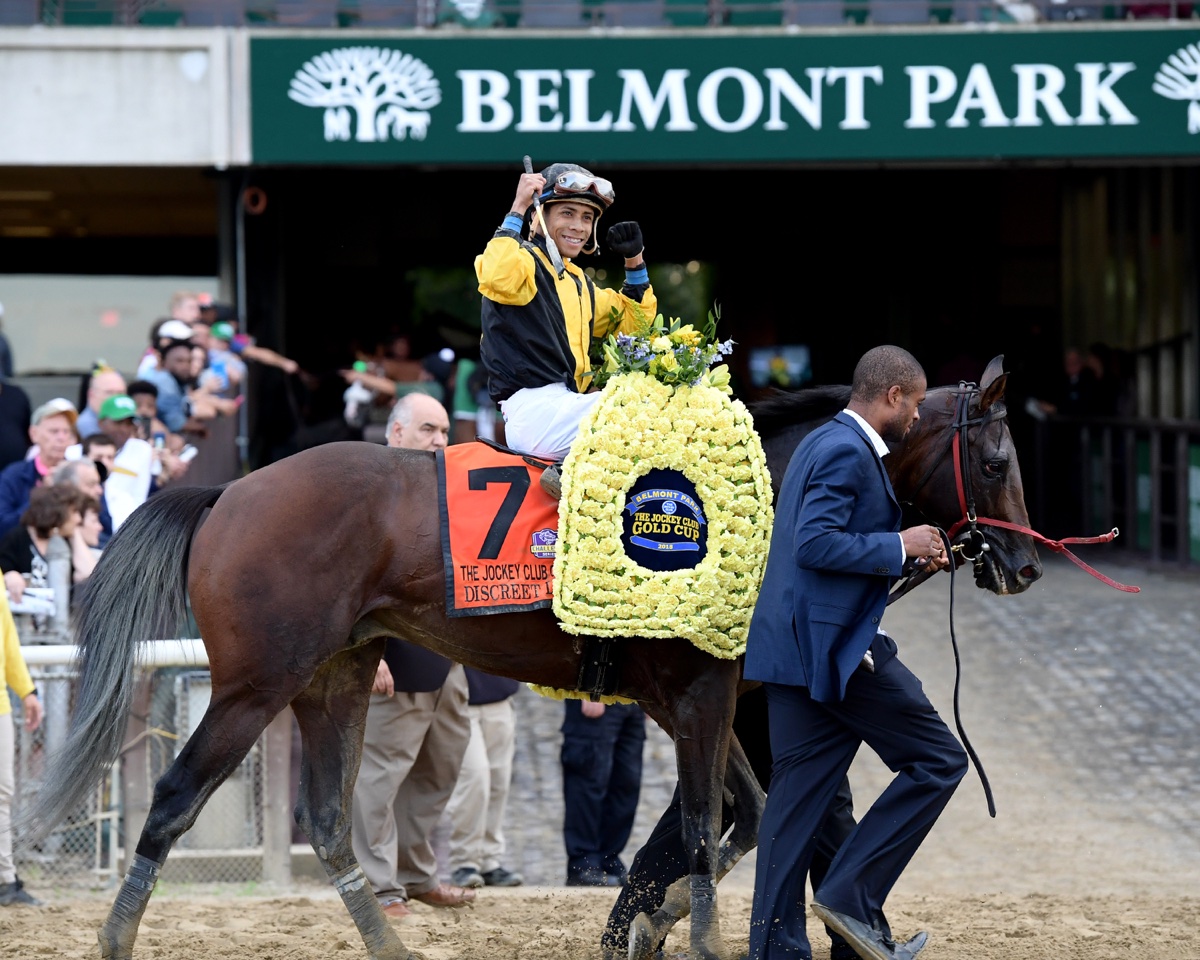 How did St. Lewis feel after his hard-earned G1 victory at Belmont? “It was one of the great moments in my life. I thanked God for that victory.”

But St. Lewis is as unassuming as his new G1 Champion. After the Jockey Club Gold Cup win, he hitched up his horse trailer to his truck, loaded Discreet Lover and headed back home: “When we got home, I went to bed. We were all so tired and had to get up early in the morning and take care of my horses.”

So, now that it has finally sunk in, how does it feel to be at the High Cathedral of American racing and entered into the Classic?

“It’s my first time,” said St. Lewis. “When I arrived, it was dark, but the lights were turned on and there were horses on the track. At Parx, we have to wait for daylight to train.”

St. Lewis is enjoying the moment and the newly found attention, but he still has a race to run later today, one he thinks will set up exactly like the jockey Club Gold Cup.

“We just have to break clean and get position and make one run.” He likes his horse’s chances. “We beat the best in the East in the Gold Cup. I’m not worried.”

Now a $1.35 millionaire G1 winner, the breeding farms are calling. St. Lewis says Discreet Lover likely will be retired after this race: “He’s earned it. I just want him to have a good home after everything is done.”

Still, despite the fact Discreet Lover won the Jockey Club Gold Cup and finished second or third in four other graded stakes races earlier in the year, his odds are once again 20-1.

“He tries all the time,” said an exasperated St. Lewis. “He just doesn’t get any respect.”

But all of that could change later today when Discreet Lover starts from gate 13 and gets his trip, with heavily favored Accelerate next in gate 14.