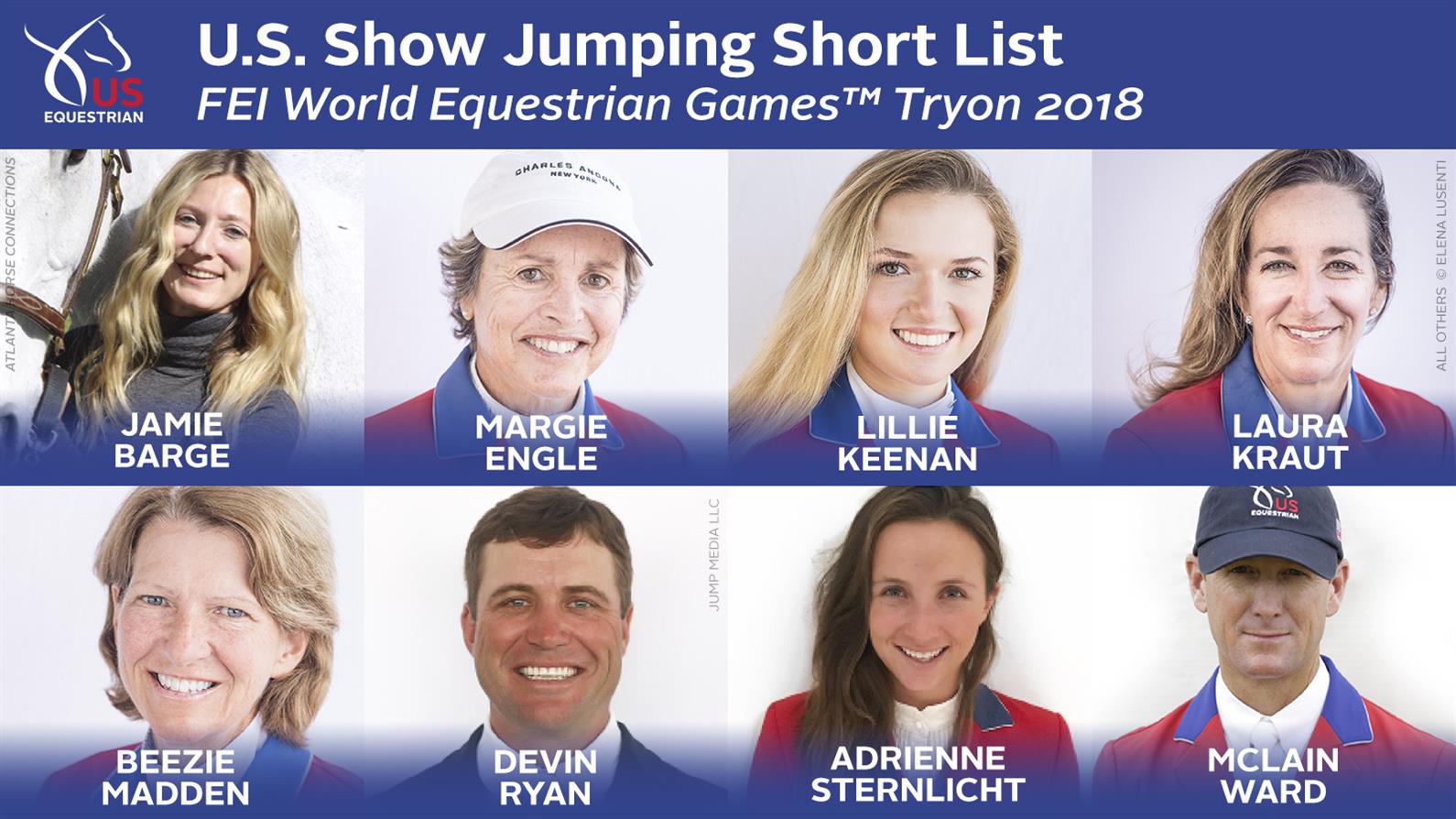 Here’s who made the cut (in alphabetical order):

Now at first glance, this list may raise a few questions. Like, “Imma sure you missed one, WHERE’S KENT FARRINGTON?” Or, “What about Ohlala and Lauren Hough?” And likely, “How the heck does the Selection Process even work in the first place?”

To these, we demure, “We’re so glad you asked.”

Team selection for the American show jumping team is a multi-phase process that started in December last year. And while it can seem like the list is produced by a bunch of official looking grey hairs, championed by the venerable George Morris, in closed door meetings with the chef d’equipe, Robert Ridland, it’s largely a merit system.

The short list starts with the four highest-ranked athletes on the December 15, 2017 Rolex/USEF Show Jumping “Average Ranking List.” Those were Madden, Ward, Farrington and Hough. Also known as “The Usual Suspects” for Team USA.

Only that version of the list was short lived. Both Farrington and Hough elected to withdraw from consideration earlier this year.

From the press release, “After evaluating the form of his short-listed horse Gazelle, the 12-year-old Belgian Warmblood mare he owns with Robin Parsky, following his return to competition post injury this winter, Farrington believes it is in Gazelle’s and the team’s best interests not to purse WEG selection at this stage.”

As you know, dedicated fan, Farrington sustained a compound fracture to his right tibia and fibula in February. The Olympic silver medalist returned to competition in May and has since earned four CSI5* victories, including the RBC Grand Prix at Spruce Meadows in June. But Gazelle’s record has been spotty at best in the past month. They’ve only jumped one clear round in their past seven appearances, three of which they did not complete—highly unusual for a pair with a phenomenally consistent track record. It’s looking more and more like Farrington made a wise decision.

Hough’s top horse meanwhile “sustained an injury that will take her out of competition for the remainder of this year,” revealed the rider on Facebook. Ohlala is expected to make a full recovery.

That brings us to…

Six more names were added to the short list in April.

Engle, Kraut and Sternlicht earned their WEG nods as the three highest-ranked athletes (who had not previously been selected) on the April 6, 2018, Rolex/USEF Show Jumping Ranking “Horse List.”

Ryan’s spot was secured as the highest placed U.S. athlete (who had not already been selected) in the final overall standing of the 2018 Longines FEI World Cup Jumping™ Final. Madden won the Final in Paris, but Ryan was the breakout star of the US team with a third place finish in his championship debut.

The final two spots are awarded based on the discretion of the chef d’equipe and team advisors. Those were Barge and Jessica Springsteen. Springsteen later withdrew herself from consideration, opening the door for Keenan. Hence the top eight above.

We’re now in the final leg of qualification, which is comprised of four observation events. Short-listed riders must contest at least two to be considered for WEG.

The first two—the FEI Nations Cups in Poland and the Netherlands—have already passed. Ryan posted the only clear for Team USA in Poland. (Both Barge and Engle’s horses pulled a shoe in the first round.) While Sternlicht and Kraut posted a clear round a piece in the Netherlands.

Once Ireland is on the books, Ridland and his advisory team will crunch the numbers, perform the traditional prayer to the show jumping gods and name the final four riders and travelling reserve to make The Squad—along with up to 10 horses. Because who doesn’t like options?

That list is due no later than September 10, 2018, the closing date for the FEI Definite Entries for the Event.

In short: Team selection is on the home stretch and the pressure’s on.