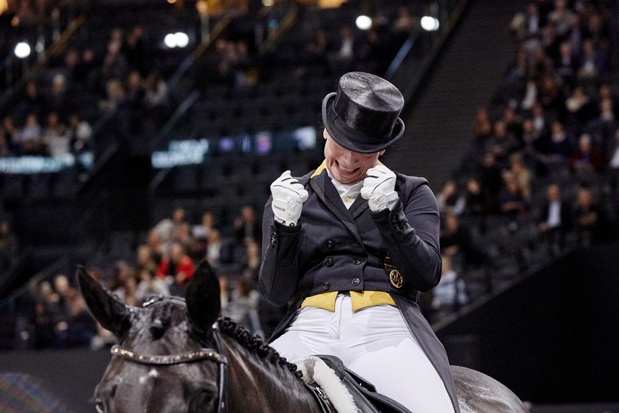 It was a heavyweight battle.

The most decorated equestrian in history versus the American young gun. (Disclaimer: the young gun is 30.)

USA’s Laura Graves, by any measure, is a bonafide superstar. An Olympic, World Cup and Pan American medalist. A top-five world ranked athlete. One of only 14 dressage riders to break the 80% barrier in a CDI5* competition. In four years, she’s padded her competitive resume with more accomplishments than most international riders will achieve in a lifetime.

But next to the decades long career of living legend Isabell Werth—a rider who has captured 10 Olympic medals (six of which are gold), not to mention three World Cup titles, seven World Equestrian Games medals (five gold) and four European Champion titles—Graves reads like a rookie. An “emerging talent,” if you will, next to an icon who has been competing on the world stage for nearly as many years as our American hopeful has been alive. (Werth’s FEI record lists her first championship in 1989. Graves was born in 1987.)

So when Graves took the early lead in the FEI World Cup™ Dressage Final 2018 in Paris, France on Friday, besting Werth’s score by over 3%, it was no mean feat. Graves has beaten the German powerhouse only once before on the world stage.

But when you poke a bear, you best be ready for a fight.

Today, the gloves came off as Graves and Werth faced off for the Freestyle, the deciding round of the World Cup Final.

Fourteenth in the order, Graves and Verdades came out swinging.

Riding a new freestyle with a steeply stepped up difficulty level, they posted a massive score of 89.082.

“I knew anything was possible,” said Graves. “I knew it would take a score like that to possibly get a win and it was a huge personal best for me!”

Werth took to the centerline two rides later and, using Friday’s Grand Prix defeat to spur herself on, she and her world #1 ranked mount Weihegold Old returned with a vengeance. Their jaw dropping performance earned them a 90.657—and Werth’s fourth World Cup title!

“Like I said yesterday, I was not really disappointed or sad, I was just thinking about how I had to prepare for today and how I had to make it better and analyse what went wrong. So [team coach] Monica [Theodorescu] and me, we decided to go in the big warm-up arena today, to bring her [Weihegold] forward and to make her free again, and that worked, and today she was the horse I wanted to show yesterday,” said Werth.

“This is life, a lot of people think it’s easy, you win and you win again, but it’s not like that. You have to think about it all the time and keep listening to your horse. Yesterday was not our day, but today we could solve it. And this is what I really like to do, and that’s the reason why I love to compete!”

That quote, by the way, came after Werth’s second gold medal winning performance of the night—the prize giving!

The German may have taken this round in Werth vs Graves, but this is one fight that’s long from over.

Said Graves: “I never practice my Freestyle as much as my other tests, so I think now I have a bit of homework to do and I think there are many more points to be earned in the future.”

In other words, she’s coming for you, Isabell…