Does Four-in-Hand Driving Have a New Dressage Queen? 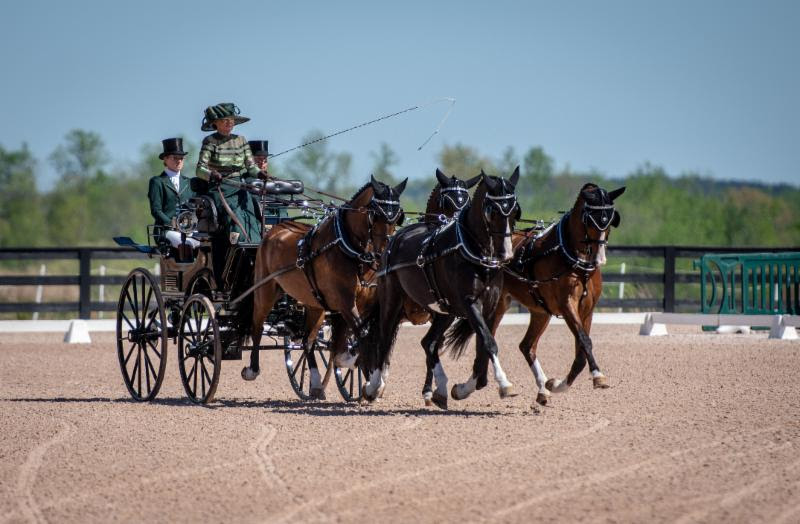 All hail the new queen of four-in-hand dressage.

The Florida-based rider, who is currently not ranked on the Top Driver Award Standings for Four in Hand, topped the field on 39.99 points to Weber’s 41.12. (He sits in second.)

It’s a notable feat considering Weber has won every phase or every FEI class on American soil since the 2011. (The only outlier on his FEI record is a 10th place finish on at the 2010 WEG in Lexington.)

Doubly notable: yesterday’s performance marks the second time this year Wrigley-Miller has beat her 2014 WEG teammate in dressage. In January, she won the first leg of the CAI2*H4 in Dade City, FL with 35.90 points to Weber’s 40.62.

The driver helping her excell? None other than Australia’s Boyd Exell, the highest-ranked driver in the FEI World Cup™ Driving Standings.

Wrigley-Miller has been training with Exell at his home base in Holland throughout the year since 2014.

“He has made me such a better horse person, overall, because he is a brilliant horseman. There is a reason he gets the results he gets. It’s because he studies horses. He knows horses. He’s the most horse-friendly trainer I’ve ever seen in my life and you never say ‘it was the horse’s fault’ — it’s never the horse’s fault. You gave the horse bad information. That’s the kind of horseman he is,” enthused Wrigley-Miller.

“His technical knowledge is so amazing that it’s no wonder he’s developed a great system on carriages.

“He’s an engineer by training, so he’s just made such a difference. When I first started training with him I told him it was like learning how to drink water from the fire hose. Every day, even five minutes before I went in the arena today, he gave me another tool for my toolbox.”

Following the Tyron event, Wrigley-Miller will head to Europe to train with Exell in Holland in the lead up to the 2018 WEG. Also a competitle Saddlebred rider, she plans to divide her time between the two disciplines/continents this summer.

“We’ll do Windsor to start. We’re not sure what’s after that because I’m the crazy woman that does two disciplines and my Saddlebred trainer has actually requested that I come back to the United States and do some Saddlebred shows. I’m just going to have to take a deep breath, but it might work out really well. I’ll come back to the States for a couple of weeks and do some shows and then we’ll ship everyone over here and wait for the decision of the selectors,” she said.

But first, they’ll finish what they started in Tryon. Today, Wrigley-Miller tackles the marathon before advancing to Sunday’s cone test.