The Badass Women of Barefoot Trimmin’

When it comes to equine hoof care, you may have noticed that men tend to run the show.

Sure, you’ll find the occasional female farrier, but they are few and far between. Take a look at barefoot hoof care (aka natural hoof care) however, and you’ll notice a definite trend toward women taking the reins.

While some may say it’s because trimming is easier than shoeing (which is true as far as brute strength is involved), I believe this trend is also due to the fact that women, by nature, have a deep-seated desire to bring about positive and lasting change. This idea represents the very heart of the barefoot “movement.”

Of course we, women, are also known for our care-taking abilities, and barefoot happens to be an option that requires both skill and great care. It’s a lifestyle, and as such, must be fostered with not only proper maintenance, but often nutritional and management changes as well. As a barefoot hoof care provider, it’s important to advise clients on all three.

And while trimming may be less physically demanding than shoeing, it is, by no means, for the faint of heart. It requires strength, skill, stamina, and an almost other-worldly patience. I say this from experience—I’ve been trimming my own four horses for the past eight years. But in my humble opinion, professional female trimmers have reached a whole ‘nother level of bad-assery, which is completely deserving of recognition. 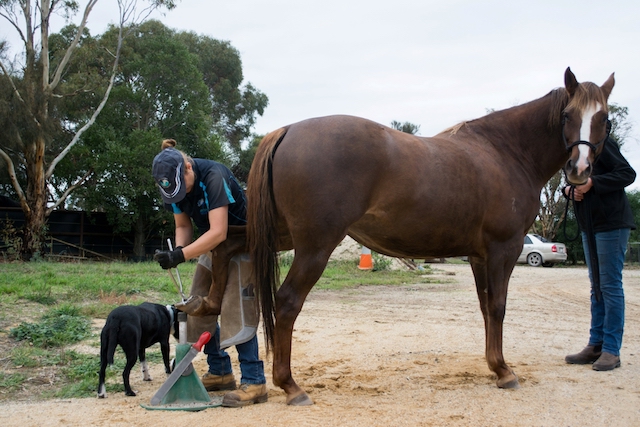 Jenny Austin became interested in barefoot trimming after an experience with her own horse.

“My endurance horse, Larry, had forward foot syndrome,” said Jenny. “I went through many farriers trying to solve it.”

Though Larry would eventually develop an unrelated heart condition, which forced his retirement, Jenny remained vigilant about finding a way to “fix” his forward running feet. She began studying everything she could find related to hooves, and soon learned how to trim Larry herself.

Jenny went on to obtain her qualification with Australian Certified Hoof Care Practitioners, and has now been trimming professionally for six years.

Even though female barefoot trimmers are becoming commonplace, Jenny said she’s still come face-to-face with some of the old stereotypes. For example, when she had a contract for trimming Clydesdales at a tourist operation in Southern Australia, members of the public would often watch her trim.

“There were always lots of surprised, Oh, a female farrier! “ said Jenny. “I had to explain that I’m not a farrier.”

Jenny once heard a father say to his child, “Look at the man shoeing the horse!”

“That’s how ingrained the stereotype is,” she said. “Not only should I be male, but also shoeing.”

When it comes to the physical demands of the job, Jenny relayed, “It’s a fact that I lack strength compared to a male, so I need to make up for that with intelligent strategies for dealing with a large, dangerous animal.”

Jenny finds it easier to work with the horse.

“Most horses do not like holding their hind legs up very high. I gently bring the leg back and up until I find the spot where there is no resistance, which I call the sweet spot,” she explained. “That is where I need to trim the hoof.”

Christina Mendoza-Green of Dalton, Georgia has only been trimming professionally for four years, and has managed trim throughout two pregnancies and half of a third (reaching a completely new level of bad-assery, amirite?!).

Christina’s clients have told her they appreciate the fact that she is reliable, on time, and even reminds them of when their scheduled appointments are approaching.

“I am patient with the horses and always try to find a way to make them comfortable while I’m trimming,” Christina said. “And, of course, I think my clients like the positive changes we bring about from trimming well.

Even so, Christina relayed that she’s still experienced backlash from some in the farrier community.

“Perhaps if I shod horses it wouldn’t be so bad, but I’m committed to owners who desire natural care and natural feet,” she said. “I do my best never to bash other farriers work. I know we all work hard and believe that our way is the right way. I think the hooves tell the real tale though, so I let things like that go.” 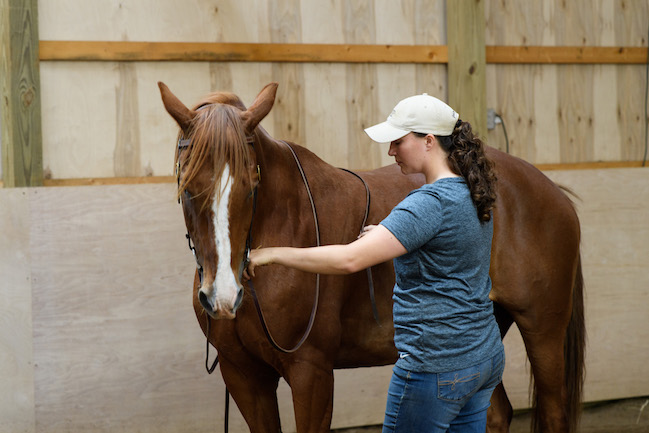 Jen Kibler has also been trimming professionally for four years, serving the northeastern Ohio area. Jen’s experience, however, has been a little different.

“Honestly, I think I’ve gotten a lot of business from new clients BECAUSE I’m a female trimmer,” said Jen. “Especially for horses who may have had bad experiences with male farriers or just men in general.”

“When he landed with his current owners, his body and mind were a mess,” said Jen. “He had one shoe left attached after about eight months of receiving no hoof care.”

Jen took over John Coffey’s hoof care and, over the course of this past year, noted that his feet have gone through numerous positive changes.

“Recently, their vet was out for yearly routine checkups,” Jen said. “She could not recognize the big, gorgeous, glowing, red gelding that once was a scared and scarred shadow of his new self.”

Jen said even though the work is hard, these are the cases which keep her going. 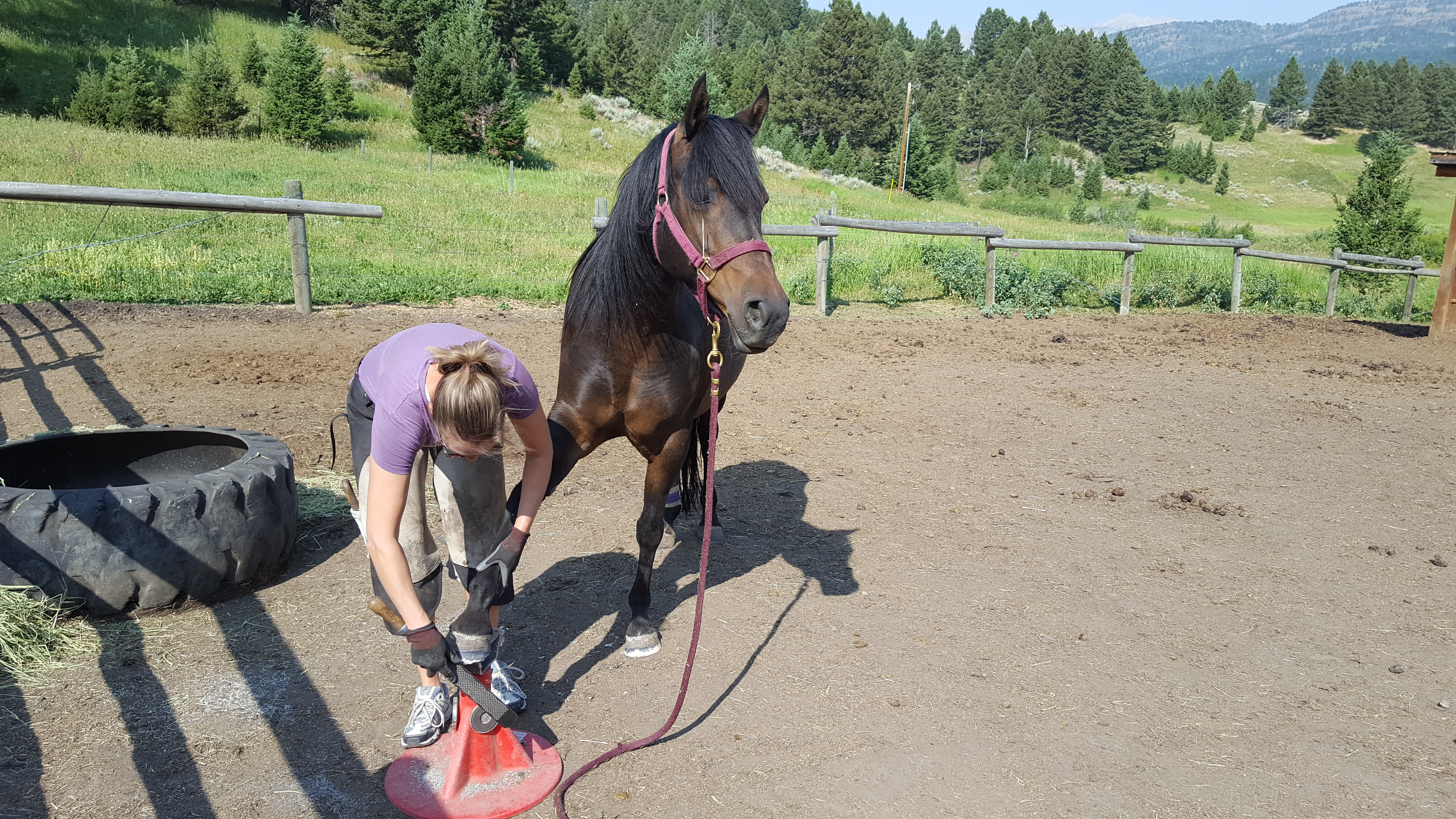 As an equine massage therapist, Lu Garnas, of Belgrade, Montana, found it fairly easy to break into barefoot trimming. It was one of her clients who first suggested she learn to trim.

“As a bodyworker, I knew how important it was to have the anatomy, form, and function correct from the ground up,” said Lu. “Influencing the foot seemed like a good add-on to my services.”

Lu has now been trimming professionally for ten years and even works with other women interesting in going into the field.

Jenny, Christina, Jen, and Lu make up just a small fraction of professional female barefoot trimmers, but their sentiments are likely shared by many. In a profession long dominated by men, they’re certainly making their mark and paving the way for more women to follow.

So I lift my glass in toast to badass barefoot trimmin’ women all over the world—may they keep swimming upstream and changing the world, one barefoot hoof at a time!

Casie Bazay is a freelance and young adult writer, as well as an owner/barefoot trimmer and certified equine acupressure practitioner. She hosts the blog, The Naturally Healthy Horse, where she regularly shares information on barefoot, equine nutrition, and holistic horse health. Once an avid barrel racer, Casie now enjoys just giving back to the horses who have given her so much. 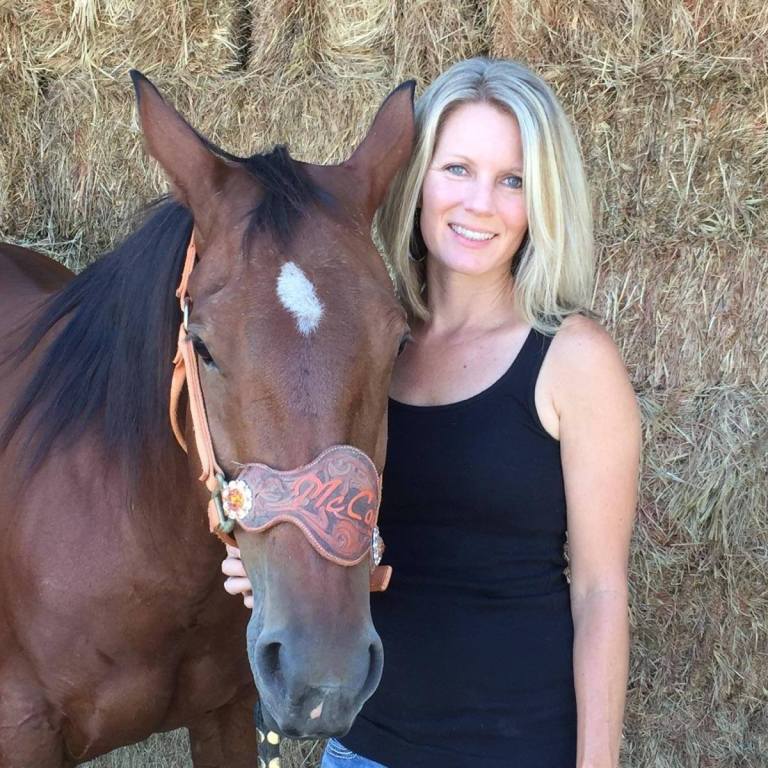