I’ve been asked a couple of times if I think that horses have emotions.

People have wondered about animal emotions for a long time. For example, Charles Darwin compared facial expressions in humans to those in animals back in the 1800’s. That said, it makes me somewhat emotional to learn that there are at least a few people out there interested enough in my opinion to ask: here goes.

If you have a horse, or work around them, it’s pretty easy to come up with a convincing answer to the question. For example, when asked if your horse loves you, you might say, “Of course, my horse loves me. That’s why he nickers when he sees me! (No, it is not the carrots.)”

For some people, the answer is so obvious that they really won’t see a need for this page. For them, if you ask, “Do horses have emotions?” the answer is simple and emphatic, “Yes!”

But I think it’s more complicated than that, and especially because there are so many emotions. Does a horse feel each and every one of them? It’s interesting to consider.

My personal favorite is, “My horse hates men.” This one is usually delivered with a straight face, and generally right before I’m supposed to engage in some procedure that might be unpleasant (for the horse). Nothing like an earnest and somewhat terrified warning to get things off to a great start.

Far be it for me to suppose that the persistent drumbeat of, “Easy, easy, it’ll be OK,” the anxious look, or the incessant jerking of an almost palsied lead rope has anything to do with raising the horse’s level of apprehension. It’s gotta be me (and maybe the needle in my hand).

Of course, when I do manage to get my work done around the man-hating horse and he’s behaved like a gentleman, it’s always, “I can’t believe how good he was.” I am still waiting for the “Wow, Dr. R., you must be some sort of genius at handling horses!” Sometimes, you just can’t win. But I digress.

All kidding aside, the question is actually quite complex. There may be lots of opinions but there really aren’t any answers in the scientific literature. I asked the question as to whether horses have emotions to an instructor and researcher in equine behavior, and she was unaware of any papers regarding “emotion” in horses. It would be a difficult area to research—equine cognition and equine personality are tough enough to study, and emotion would be almost impossible.

That said, the term “emotionality” is often used in the literature and texts on horse behavior, but it refers more to personality. That is, such things as the repeatability of responses to novel or unpleasant stimuli, or the ease of learning tasks.

There’s no doubt that horses have behaviors to which people input emotions. But these interpretations may or not be an accurate reflection of what’s actually going on inside the horse’s head. Of course, this differs from evaluating emotions in humans because…because…hmm…I’ll have to work on that one.

Nevertheless, in trying to determine if horses have emotions, we are limited both by our own perspective and, perhaps more importantly, by language. We can only use words that describe human emotions to describe the sensations of animals. When people use words like “love” or “anger” or “fear,” they describe a wide range of actual emotion and thought. Just as each human perceives the world differently, it’s entirely likely that animals perceive the world differently from people.

Therefore, our ideas regarding the sensations that horses experience—ideas that are based on our own experiences, then projected on horses—may be inaccurate.

I think that it’s interesting that it’s been recently shown that horses apparently produce different types of vocalizations in negative and positive contexts. Most people that have spent some times around horses have some sense of that. Otherwise stated, different whinnies appear to have different meanings, and can evoke certain behaviors (e.g., anxiety). But that appears to be more of a communication thing.

Scientists have also looked at eye wrinkling to see if the eyes are really a mirror of the horse’s soul. 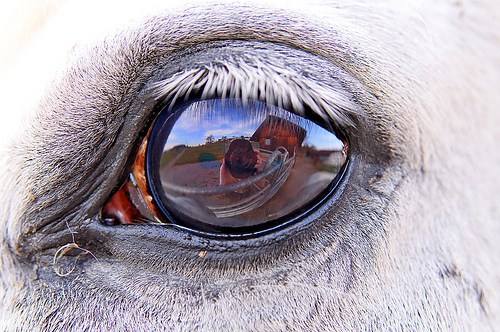 ASIDE: Here’s the whole quote: “The eyes are the mirror of the soul and reflect everything that seems to be hidden; and like a mirror, they also reflect the person looking into them.” That quote is attributed to Brazilian author Paulo Coelho, but the sentiment appears to be a lot older. The Roman philosopher and statesman, Cicero (106-43 B.C.). is quoted as saying, ‘Ut imago est animi voltus sic indices oculi’ (The face is a picture of the mind as the eyes are its interpreter).

Anyway, researchers have recently investigated whether variations in the expression of eye wrinkles caused by contraction of the inner eyebrow raiser reflects emotions. They confronted horses with positive and negative conditions and tried to bring about positive and negative emotional states, figuring that negative emotions would increase eye wrinkles (and positive ones would reduce them).

The results weren’t consistent, but eye wrinkling did relax during grooming, and increase during food competition. Interesting, but not conclusive.

It does seem that horses can recognize emotions in people. They seem to be able to distinguish between positive and negative facial expressions. That’s probably not that big of a surprise to most people, either, but it does give you something to keep in mind when you are approaching your horse. They certainly do feed off of—and appear to recognize—certain emotions in people.

So, “Do horses experience sensations of fear, love, hate, loneliness, etc.?” Personally, I think so, at least on some level.

Are these the “same” feelings that people have? I have no idea, but I’m inclined to think not.

Regardless, I’m pretty sure that it’s a question that would be very difficult to answer. Plus, if even if we got a confirmed, scientific answer, people would most likely discount it anyway if it didn’t agree with what they already thought (“What, horses don’t love? Well, I don’t care what anyone says, my horse loves me.”)

But if you ask me what I think about your horse, I’m not falling into that trap. You’re never going to hear me saying that your horse doesn’t love you; what purpose would that serve? And if you tell me that your horse hates me, I’m really going to pay attention, no matter what the research says.