Nashmiah Steals the Show in Dubai

This week’s Dubai World Cup Carnival featured an unusual two meetings on Thursday and Saturday and more than one unusual finish.

It’s rare that winning three of six races can be considered a disappointing evening, but that’s what happened to Godolphin at Meydan Thursday as Really Special was driven from the ranks of the undefeated. Saudi Arabian-bred and Nicholas Bachalard-trained Nashmiah silenced the hometown crowd in a shocker to collect the listed UAE 1000 Guineas for 3-year-old fillies over a mile of dirt.

The winner captured her undefeated fourth win in the feature by only a head over Nomorerichblondes with Rajar bleached by another 1-1/4 lengths. Really Special never recovered from being bumped at the start and could only finish a forgettable fifth.

“I knew she was tough after my win on her in Saudi last time,” said pilot Mickael Barzalona of his winner. “I was able to give her a bit of a breather which really helped,” he explained of his strategy to take an early lead. “But then she just kept battling at the end. This was a big step up in grade for her.”

A bit of sweet revenge perhaps as well for Barzalona, a former retained rider for Godolphin.

The hometown evening started off great as Top Score got a nose up on Nobellum in the 7 furlong Jaguar turf with Daqeeq showing by 2-1/4 lengths.

Krypton Factor set the stage for the evening’s feature by taking a 1-1/2 length factor over Jamesie, with Sir Maximilian a common third by a nose in the 3/4-mile Jaguar turf sprint.

Hometown fans were set to watch Really Special earn an early special hat trick that never happened. Squeezed between Spanish Moon and Calare at the start, the favorite was forced to the middle of the pack where she maintained pace but picked up no distance as she was moved to the far outside lane in the stretch and had no chance.

Salateen added to the Godolphin woes scorching Flash Fire by a nose with Oh This Is Us behind them by a short head in the 7-furlong turf handicap. The win gave jockey Adrie De Vries, aka The Flying Dutchman, his third win on the evening.

Godolphin fans’ spirits were somewhat lifted by evening’s end when Folkswood put the wood to Elleval by 2 lengths in the 1-1/8 mile turf Jaguar handicap with Hors De Combat successfully dueling Secret Brief to gain third by a head.

In the card opener Af Mathmoon added to an impressive resume that includes a win in last year’s Kayala Classic on World Cup day by calculating a multiple 5- 1/2 length score over Af Maqayes and dousing Burning Breeze by another 6-1/2 lengths in the one-mile Group 2 Jaguar Mazrat Al Ruwayah for Purebred Arabians.

The boys in blue regrouped for a Saturday Carnival meeting with two Group 3 dirt features, the Firebreak Stakes and the UAE 2000 Guineas headlining the card. They came back with a vengeance, but not entirely as predicted and not entirely at the outset.

The evening started off well for Godolphin as Comicas earned a one-length uncomfortable laugher over Dundonnell in the 3/4-mile dirt handicap with Shaishee shy by another 4 1/2 lengths.

That followed the card opener with Ostaad a steady neck ahead at the finish and Jaaref jarred by a neck while Tried and True was not so true in a 3/4-length third-place try in the 1-1/8 mile turf handicap. 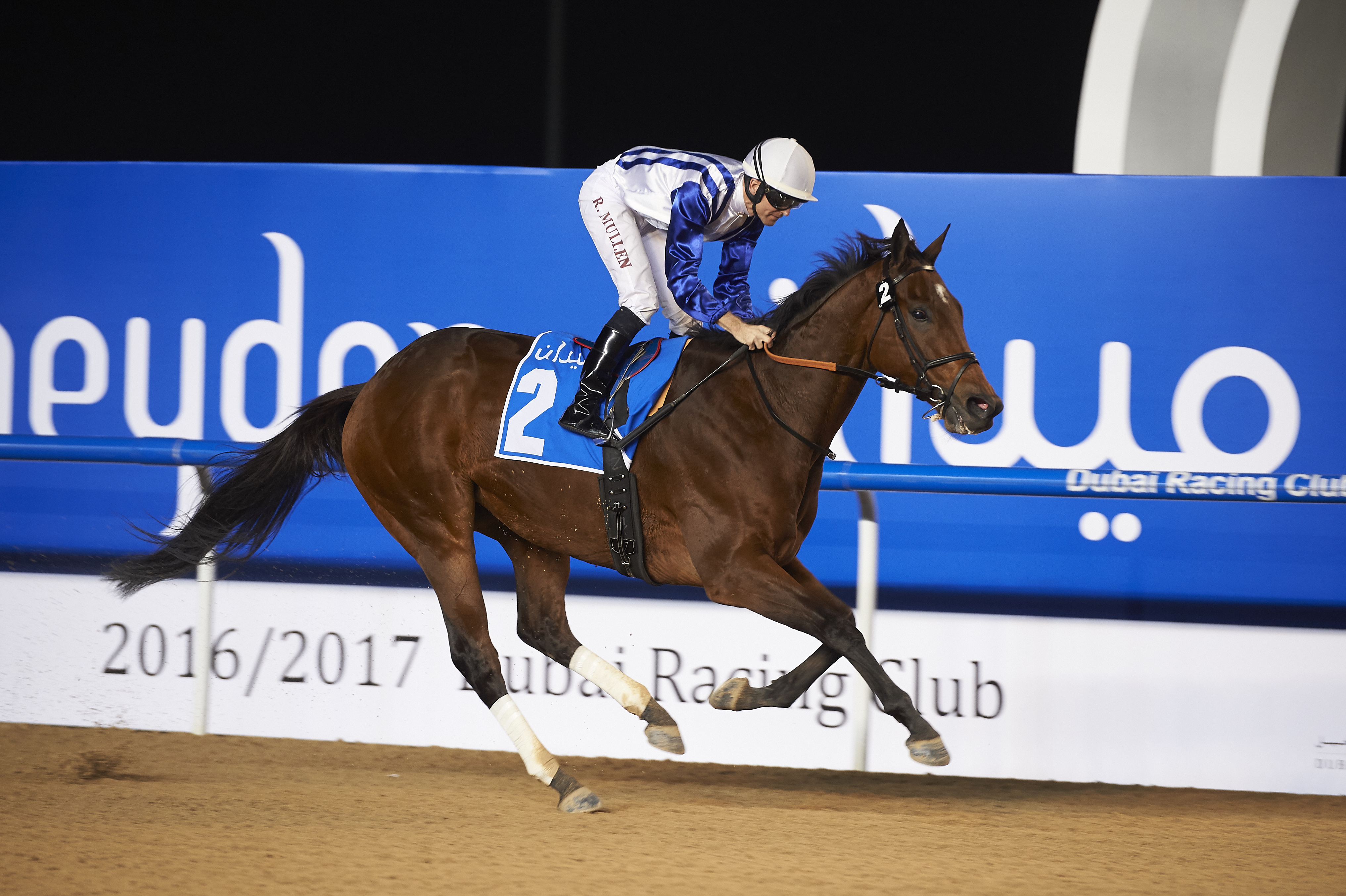 The co-feature mile-long Group 3 dirt Firebreak Stakes was supposed to see highest-rated last year’s winner Confrontation at the front at the end, but the 7-year-old son of War Pass passed no contender and finished far south, dead last in the eight-horse field. Satish Seemar-trained North America with Richard Mullen aboard finished a continental 7 lengths north of Ennobled Friend with Lindo Amor a little less in love by another 3-1/4 lengths.

Steady Pace disappointed as Final Venture ventured final in the following 3/4-mile turf handicap with Fityaan less fit by 3/4 of a length and Polybius a multiple 2-1/2 lengths back in third.

The red-to-blue reversal began with the evening’s featured one-mile dirt Group 3 UAE 2000 Guineas as Thunder Snow guided by Christophe Soumillon made a lot of noise by storming home 5-3/4 lengths in front of Bee Jersey while Capezzano danced 3-3/4 lengths further behind. The 3-year-old Darley-bred son of Helmet is off to a promising career with this win following a Group 1 win in France and a Group 2 and Listed seconds in Great Britain as a 2-year-old. 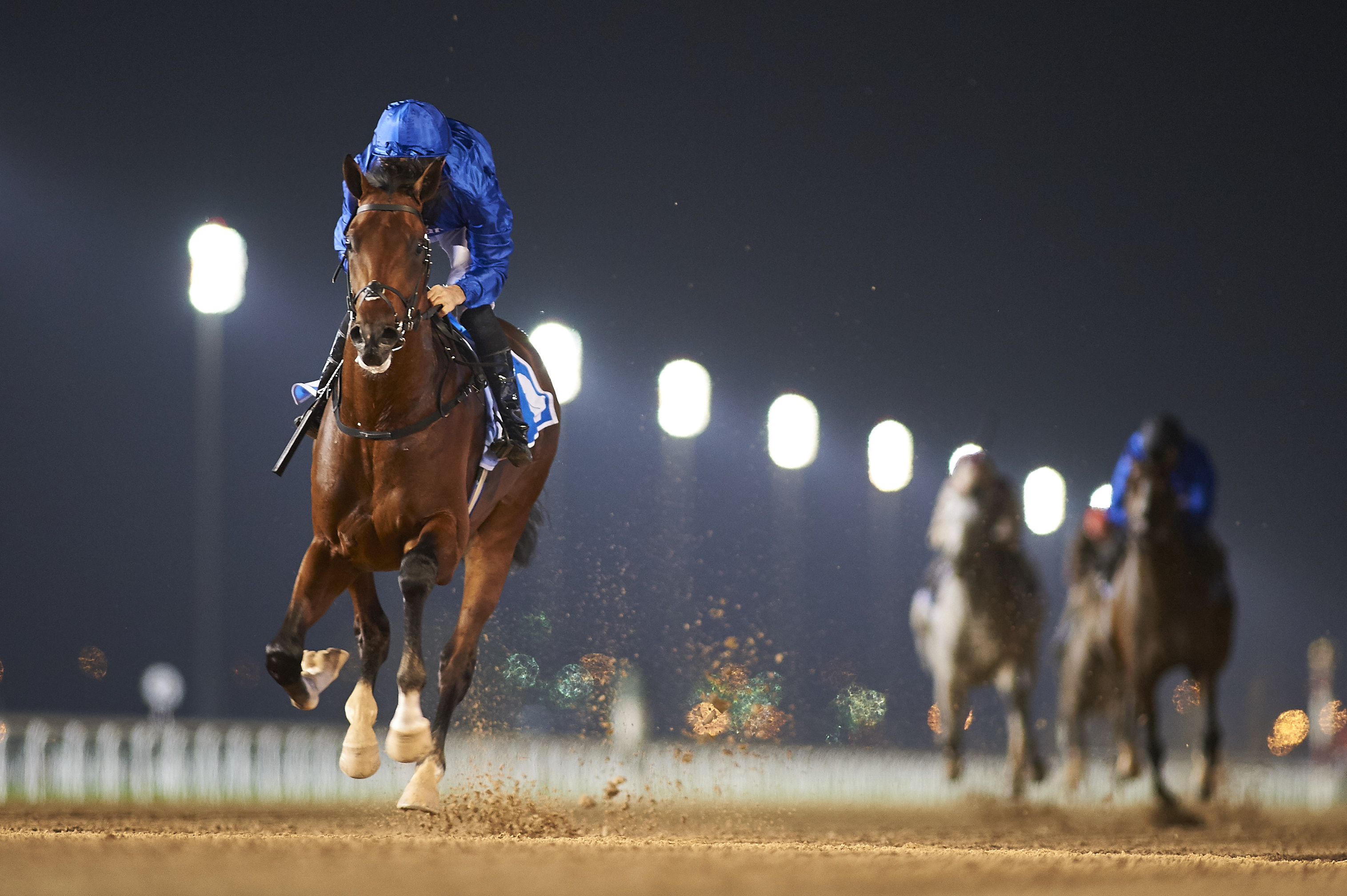 Winning trainer Saeed bin Suroor believes his new potential star has several options after his first win on dirt. “We will see how he comes out of this race and discuss it, but the UAE Derby on Dubai World Cup Night or the Al Bastakiya on Super Saturday beforehand are options now.”

“I knew he was better than every other horse in the race,” Christophe Soumillon added. “If you can have some good gate speed and get out of the kickback, which we did, you have a great chance.”

The home team returned for an encore in the following one-mile turf handicap as Bravo Zolo was solo at the line by 1-1/2 lengths over Suyoof, a neck enough over Diferent–yes, that’s what makes him different–Dimension, a short head different from Belgian Bill.

By the close, Godolphin had two disappointments in Really Special and Confrontation, but still hoofed in most of the prize money with seven winners over two weekend Carnival meetings after Prize Money cashed the check in the closing 12-furlong turf handicap neck win over Rembrandt Van Rijn with Dylan Mouth closed a less noble head behind.

With the Carnival edging toward Super Saturday March 4, this week’s meet will feature four group turf races: the Group 3 Dubai Millennium Stakes and the Meydan Sprint, along with the Group 2 Zabeel Mile and the Balanchine for Fillies and Mares. The weather may begin to be warming up but there will be cool total prize money of over $1 million at stake for the Thursday card.