That’s Just How Laura Graves and Verdades Roll in 2017 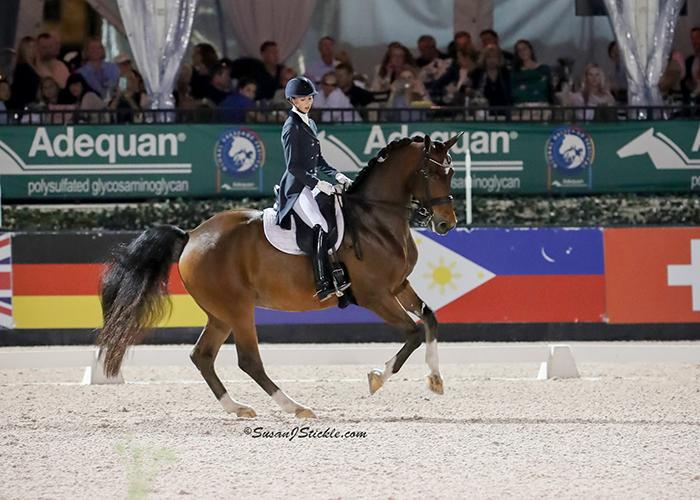 Laura Graves and Verdades doesn’t always win b— Oh, wait. They actually do. They always win.

The Olympic bronze medalists captured their sixth consecutive victory at the Adequan® Global Dressage Festival (AGDF) in Wellington, FL this week. It’s also their fifth consecutive score of 80% or higher. Because that’s how they roll in 2017.

On Thursday, Graves and the 2002 Dutch Warmblood captured the FEI Grand Prix CDI-W with a score of 80.240%.

“It feels much more secure. It’s nice to know that what happened at the 5* wasn’t a one-hit-wonder,” Graves said of her second 80% score in the FEI Grand Prix. “It’s still pretty awesome. It’s a really, really exciting way for us to go in to the big things we have planned.”

On Friday, they kept the 80s coming in the FEI Grand Prix Freestyle CDI-W to claim their third “Friday Night Stars” of the season with an 81.903%.

“Tonight he was hot, maybe hotter than he’s been the past two shows, so that was a bit challenging, and we have yet to ride a completely clean freestyle this year,” said Graves.

“That’s definitely a focus going into March, but this horse does a fantastic job even when he’s hot and maybe a little spooky. He never lets me down, and he gets really excited when he’s about to go in. He knows when it’s his turn, and I love that about him.”

With the required two scores for the North American league, Graves and Verdades have booked their ticked to the World Cup Final in Omaha, Nebraska. Her Olympic teammates Steffen Peters and Kasey Perry-Glass will battle it out for the remaining spot.

“It’s so fun to have everyone back together and [to see] friendly faces,” said Graves. “We are all so competitive; we’re all out there riding for two spots for the FEI World Cup (Finals). It doesn’t affect our relationships outside of that. It’s amazing to have friends that can compete against each other and want the best for each other. I just wish Steffen didn’t live in California.”

Peters and Rosemunde officially sit in second overall in the World Cup rankings with scores of 78.732% (Wellington) and 78.825% (Las Vegas). Perry-Glass, who scored a 79.541% with Dublet on Friday, is on track to usurp their spot but needs to log an additional qualifying score at next week’s final qualifier.

“We will see what happens from here,” said Peters. “The bottom line is, those are two extremely exciting World Cup candidates. If we happen to get a wild card, in that case, ‘Rosie’ and I will be ready.”

Graves and Verdades are currently ranked fifth in the world.