Caring For the Orphan Foal 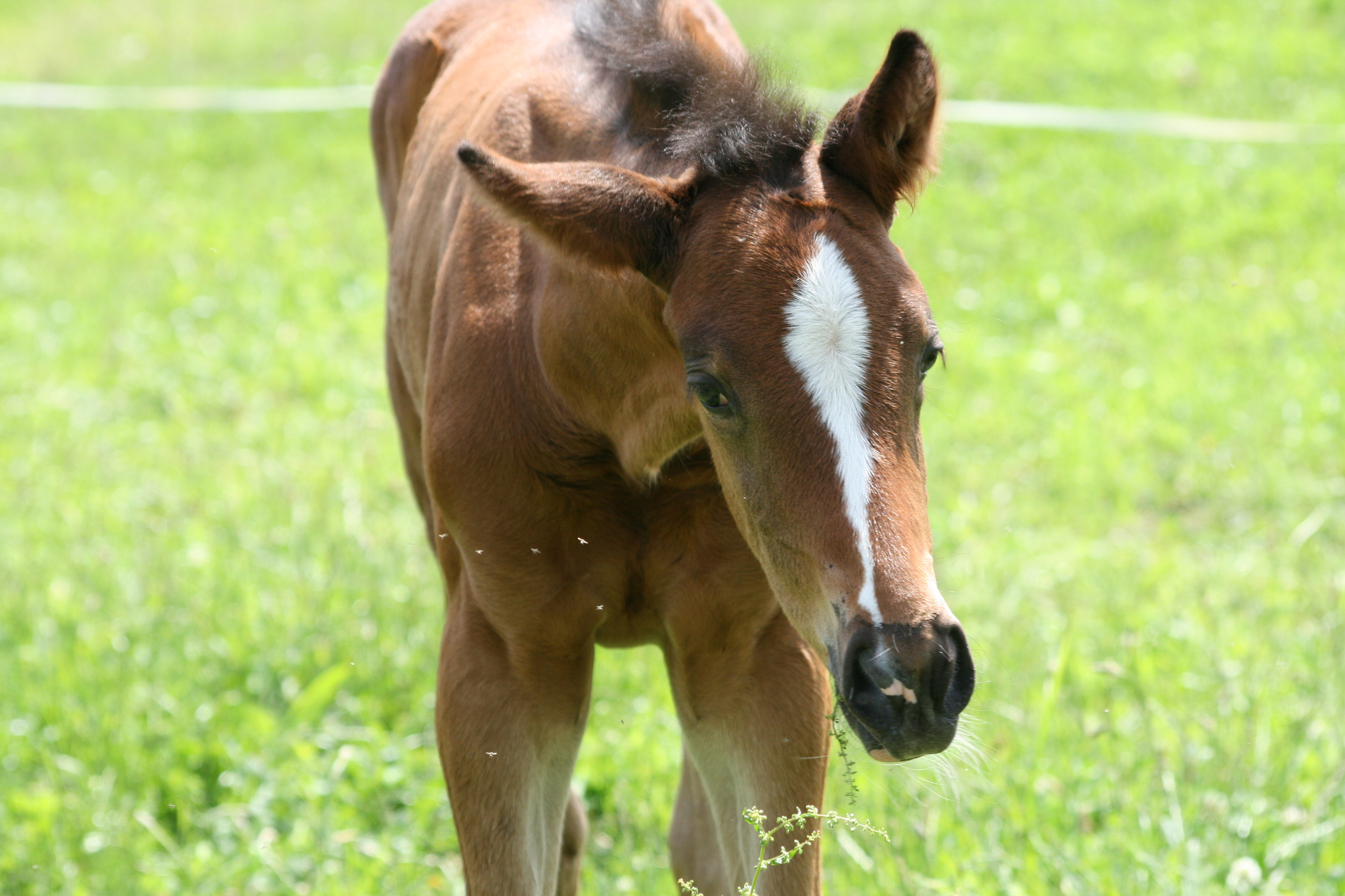 This time of year brings our new equine prospects into the world. When everything goes well, the hope and joy experienced with our foals is immeasurable. Nature can be a mean beast however, and sometimes a foal is left without a mother. Since a foal normally stays with the dam until about six months of age, any foal that loses their mother younger than that is considered “orphaned” for the purposes of this article.

There are two major concerns with orphaned foals: health and socialization.

Examination of the Foal

Foals should be examined within 12-24 hours of birth. A physical examination can identify problems early. At this stage the veterinarian is going to focus on congenital defects, which even though innate, do not necessarily mean there is a genetic cause. These potential common problems include cleft palates (which in the horse will be at the very back of the throat), heart murmurs, tendon contractions or other musculoskeletal abnormalities, and problems with the umbilicus such as hernias or a patent urachus (where the umbilicus drips urine). The foal will also be evaluated for broken ribs (which can occur from trauma during the foaling process). 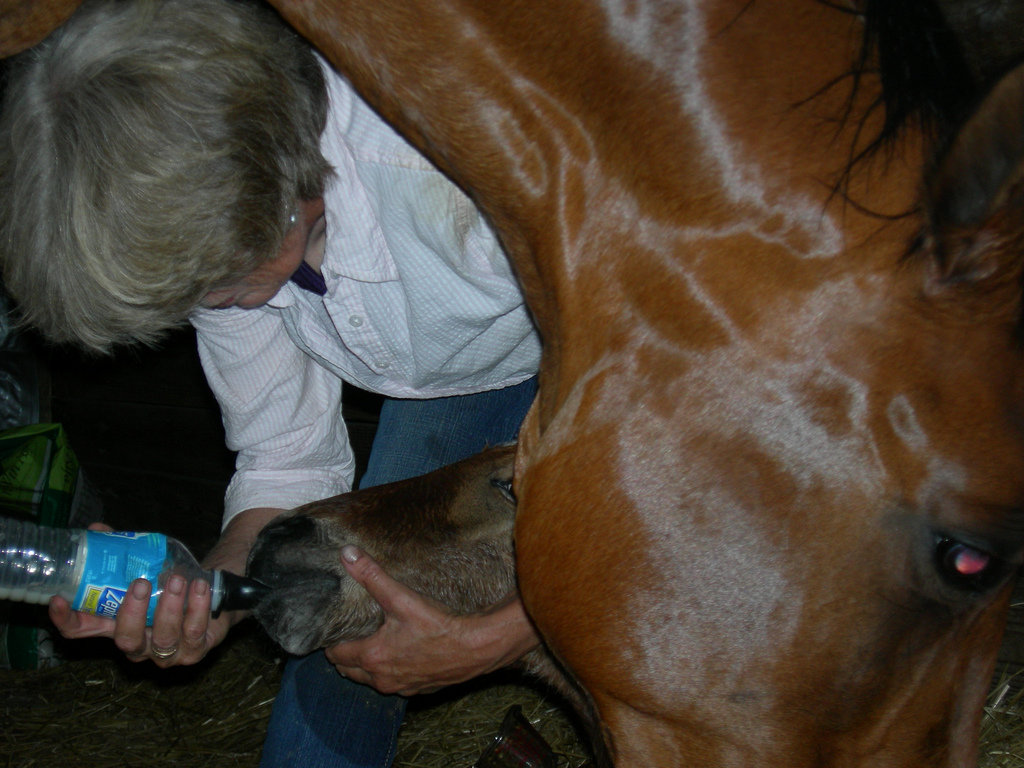 If a foal is having problems or is orphaned after a few weeks they should be re-examined at that time. Other conditions that warrant immediate veterinary attention include depression, fever (over 102F), difficulty breathing, milk coming from the nostrils when drinking, coughing, nasal discharge or straining to urinate or defecate.

Evaluation of Passive Transfer of Immunity

Equines are unique in that practically none of the dam’s immunity is passed across the placenta. Therefore, a foal is born naïve to any pathogen she encounters. By ingesting colostrum in the first few hours of life she will acquire immunity. This is called passive transfer. The colostrum is the first milk the mare produces, which is rich in immunoglobulin proteins (antibodies called IgG). It is more yellow, thick and sticky than the milk she will produce later. 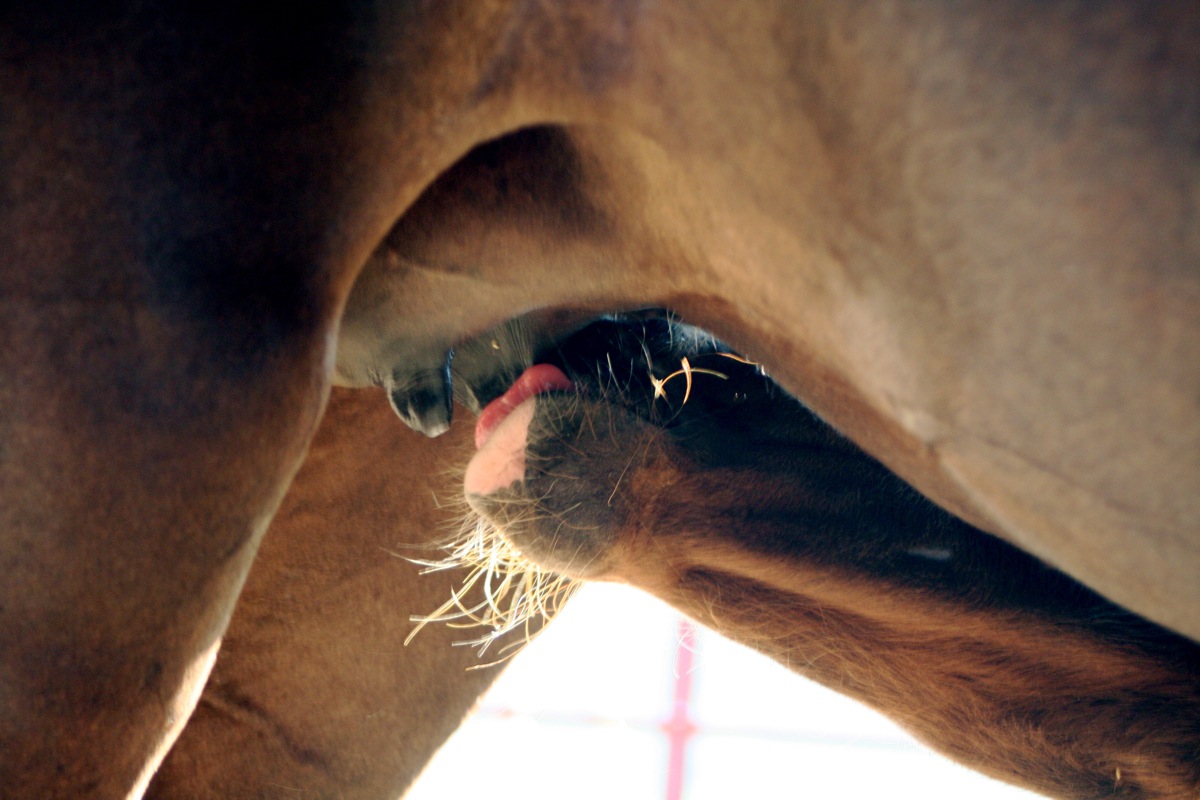 The orphan foal may not have a chance to suckle, but it is still important to obtain colostrum from somewhere. If the dam was lost during the birthing process, an attempt should be made to extract colostrum and administer it to the foal orally. Getting adequate colostrum is the most critical step to ensure survival of the early orphan foal.

Large breeding farms may “bank” colostrum and freeze it. Nurse mares may also be available depending on your location. Powdered colostrum is generally not adequate for foals, but fresh colostrum from a local cow may be useful.

If there is absolutely no way to get colostrum for the orphan foal, then she will need a plasma transfusion. This is a way to ensure the foal will acquire passive immunity by using another route. Commercially available frozen plasma should then be administered by a veterinarian.

All foals should have their IgG levels evaluated. In normal healthy circumstances this should be at about 24 hours of age. I recommend testing any orphan less than a month old whose status is unclear. If the foal does not adequately absorb IgG the immune system will fail and the foal will be susceptible to pneumonia, “joint ill” (infected joints), and diarrhea. Common pathogens that she should be able to easily fight off can become a major source of severe illness. Identifying a low IgG level before infection sets in is critical to ensure survival.

Nutrition in the Young Orphan

The neonatal foal must derive 100% of her nutrition from milk. When nature’s milk is not available a milk replacer can be used. There are several very good brands and the one selected should be labeled specifically for horses. Milk from and replacer designed for other species is different in lactose and fat content, so foals can get severe diarrhea with those formulations. In my experience it’s more difficult to convince a foal that has tasted nature’s milk to drink the replacer. 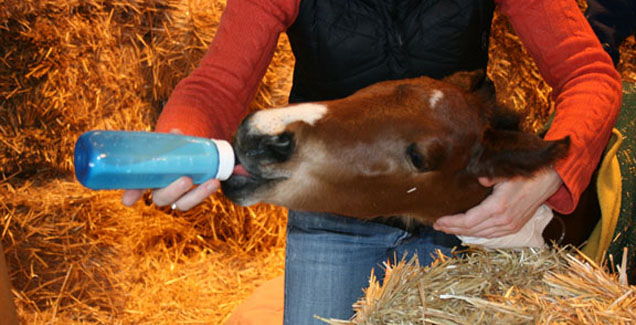 Foals of all ages should have clean, fresh water available at all times. The early neonate needs to be offered milk a minimum of every two hours (every hour is more ideal for the first week). Usually they will need multiple attempts to latch on, and will drink only a few sips at a time (this will steadily increase as their nervous system matures). After two weeks of age, the feeding schedule can usually be reduced to every 3-4 hours.

Most commercially designed bottles have nipples that flow too fast and can result in aspiration of the milk and subsequent pneumonia. The human baby bottle is the most ideal bottle and nipple for most foals. When the bottle is inverted, milk should not flow from it. If it does, it’s too fast. To ease the burden of feeding the bottle can be secured to a wall. Ideally the nostrils should be below the ears when the foal is drinking to help prevent aspiration.

For these reasons the young foal should be encouraged and taught to drink milk from a bucket, which can be achieved with some effort. First, dip your clean finger in the bucket of milk and allow the foal to begin to suckle. Repeat the dipping, gradually moving your hand closer and closer to the bucket. It may take several or many tries, but it is well worth the effort. A “bucket baby” is less likely to develop aspiration pneumonia than a “bottle baby.” Of course, the bucket should be checked frequently to ensure that it is fresh, clean and has milk available.

It’s also important to watch your baby. A normal foal that is getting enough to eat will go through a cycle of: play, eat, sleep, repeat. If the foal is constantly standing at the bucket or bottle, or is not seen taking a large number of naps during the day, she is probably not getting enough nutrition.

After about two weeks the foal can be switched to milk replacer pellets. These are far easier to manage and should be available for free-choice feeding at all times. Of course, the switch should be gradual. Offer a handful at a time and working up to 4-6 pounds per day. When the foal is eating this amount, the liquid milk can be discontinued. The milk pellets should be fed until “normal” weaning time – usually about six months of age.

Foals will start to play with and mouth roughage at around four weeks of age. They will gradually increase the amount of hay and pasture they are consuming so that it becomes the staple of their diet. The roughage selected should be the highest-quality available.

Monitoring the foal’s growth by height and weight is helpful to ensure she is meeting milestones. A thin foal is not getting enough nutrition, and overweight foals are prone to developmental orthopedic disease.

Now that you have ensured your foal is healthy and well-fed, it’s time to critically evaluate socialization. Orphans have a reputation for being difficult to handle all the way up through adulthood due to a general lack of respect for their handlers. 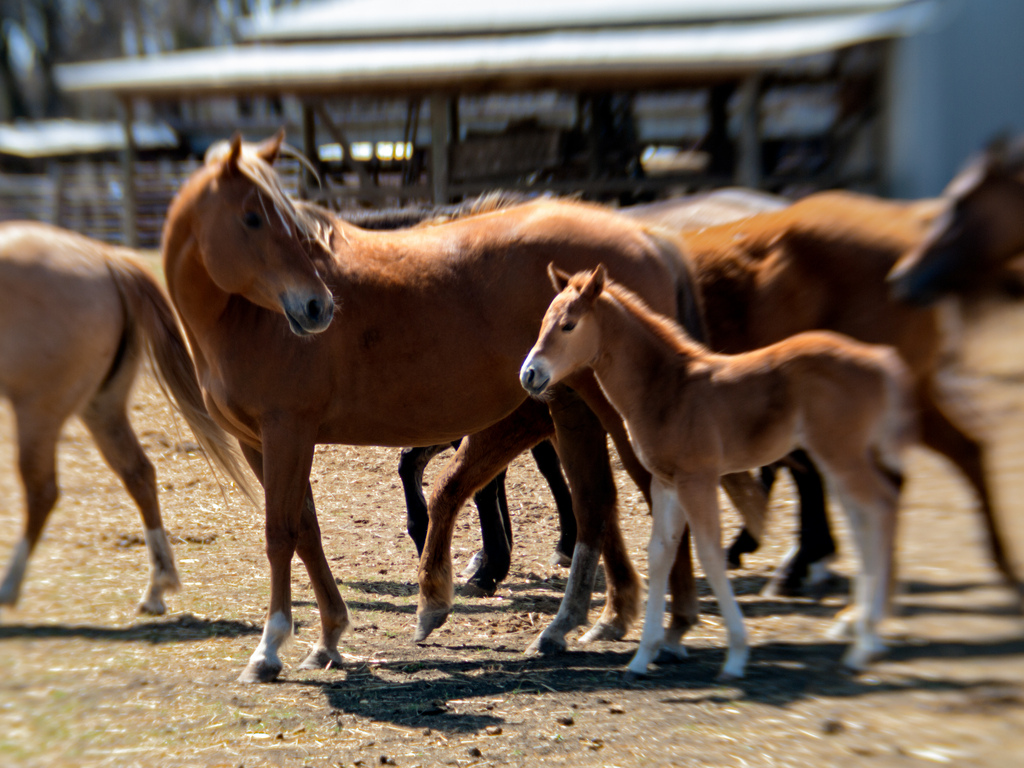 Here is an example: I was once asked to evaluate a mare with a cut over her knee. I always listen to the heart as part of the examination process and when I went to do this, she tried to kick me. When I touched the shoulder of the injured front leg, she tried to strike me again. When I injected her for sedation, she tried to bite me. I spoke with a veterinarian that worked with her previously, and it turned out that the mare had been an orphan and never developed proper respect for the people around her. It doesn’t have to be that way for the horse. (It should be pointed out that foals can be over-handled, leading to the same issues).

From a long-term respect standpoint, the less a human is associated with feeding, the better. This is one of the major reasons to transfer a baby to milk from a bucket, then a pelleted milk replacer as soon as possible. Minimizing the number of times a foal drinks from a bottle held by a human is critical in developing respect for people. 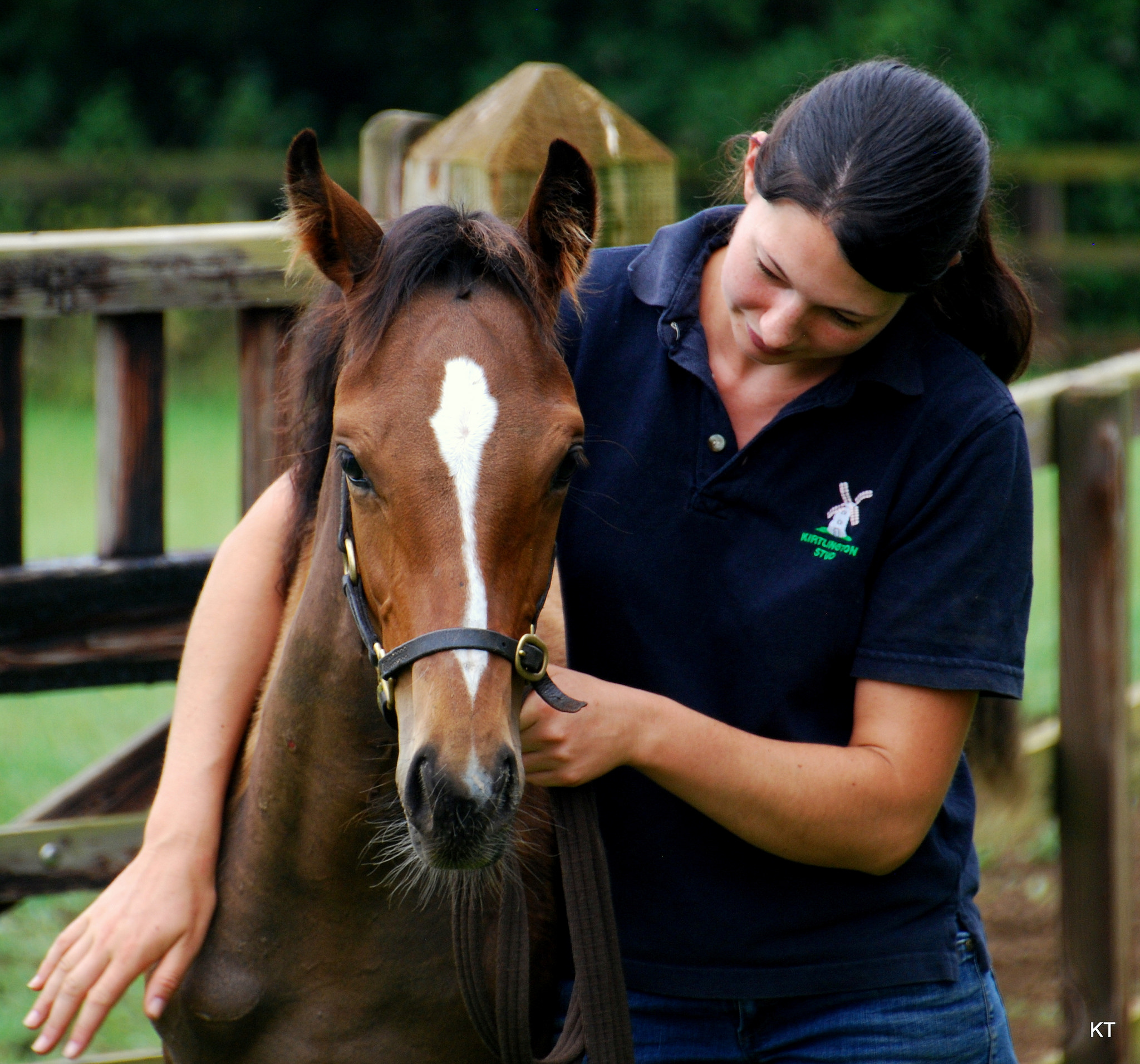 The second crucial aspect is allowing the foal an opportunity to learn to be a horse. A surrogate mare is the most ideal situation. This nurse mare will provide nutrition as well as socialization. If you are lucky enough to match your foal that lost her dam with a dam that lost her foal, that most optimal.

If a nurse mare is not available, allowing the foal to live with another adult horse may not offer nutrition, but does provide socialization. The adult horse should be kind and steady, but no-nonsense. An older mare that has raised a foal but doesn’t currently have one of her own may work, but a nice gelding is often fine as well.

Keeping orphaned foals in a group amongst themselves without adults doesn’t really help; they don’t learn from each other how to be properly versed in being an adult horse. They need to learn the “language” of horse.

This doesn’t mean that the foal should be completely ignored by humans. Of course, like any other foal she should be trained to lead with a halter and accept grooming and handling of feet. The early training and handling of an orphan should closely match that of any foal you raise.

Orphan foals are hard work, but saving a horse’s life and watching her grow up to be a healthy, solid citizen is well worth the effort. 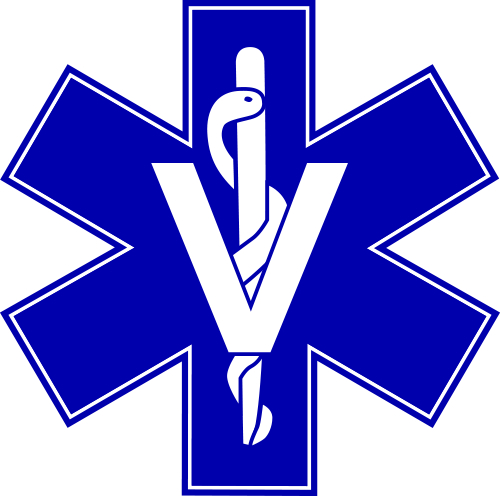