In Her Own Words: Lauren Billys On Riding the Olympic Dream

Home > Blog > Eventing > In Her Own Words: Lauren Billys On Riding the Olympic Dream 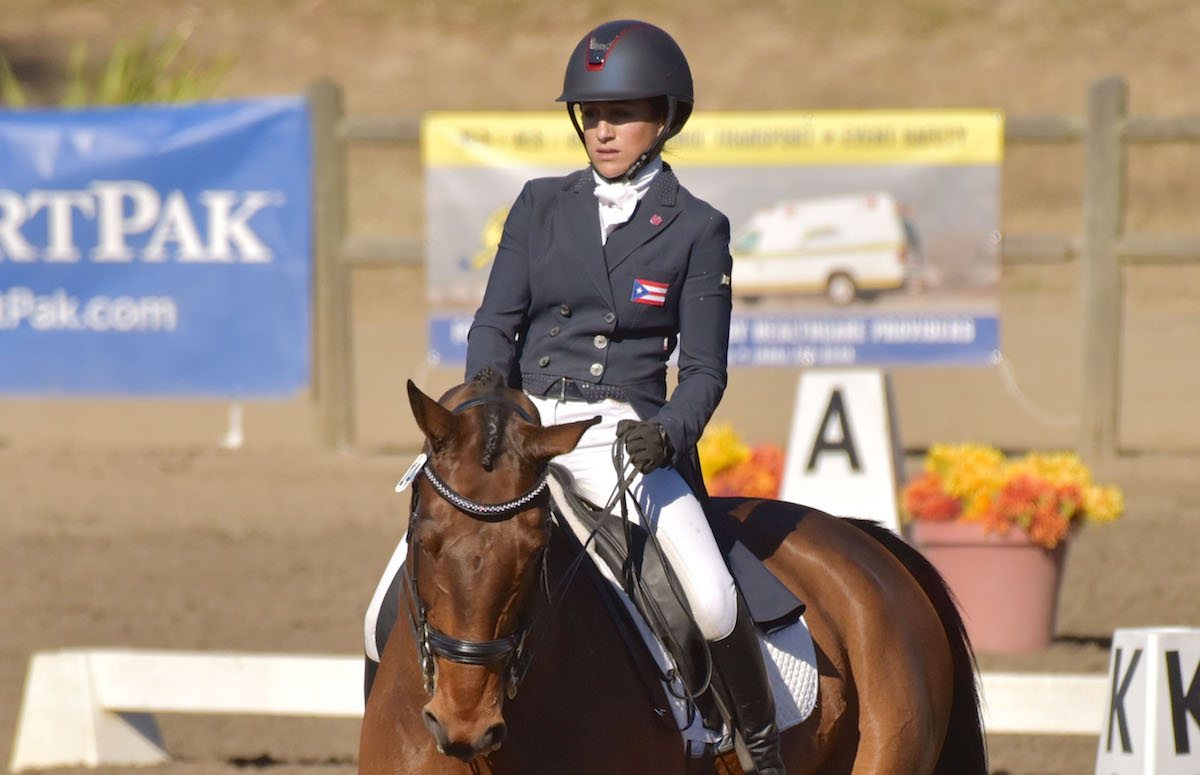 At age 27, Lauren Billys qualified to ride for Puerto Rico in the Individual Eventing competition at the 2016 Rio Olympic Games aboard her 14-year-old Irish Sporthorse, Castle Larchfield Purdy. It was the dream of a lifetime, but her journey was just beginning. Here, Billys reflects on her favorite Rio moments, the crucial lesson she learned about herself, and making her Olympic debut on “the hardest cross-country course I’ve ever seen.” As told to Nina Fedrizzi.

I kept myself busy all the way up until I left for The Land Rover Great Meadow International CICO*** in Virginia, right before I went to Rio. When I got to the East Coast, I finally had to deal with what I’d been thinking about mentally in terms of my preparation for the Games.

It was a really good time for me to get clarity on what my focus was, and to get centered, so to speak, both for my horse and myself, so that we were ready to totally pull the trigger. I talked to my friend, (Rolex rider) Avery Klunick, right after I got into the Olympics in March. She’s like, “You sound just like me a few months ago. You need to talk to somebody.” It was kind of reassuring to know that the things I was going through mentally were relatable.

I started working with sports psychologist Marcus Washington in April. Within about 10 minutes of talking to me on the phone, he could pinpoint exactly what I needed to work on—things that I’d been grappling with for weeks and had not been able to figure out. I’m a pretty analytical person, mentally, and he could kind of look at me objectively. I leaned heavily on him, and he really helped me.

I had always visualized the Opening Ceremonies in my head. Maybe it was from watching it on TV, seeing athletes like Michael Phelps and Serena Williams. On that day, though, I realized I wasn’t watching these people anymore, I was one of these people now. I think I needed to have that moment to recognize that I deserved to be there. I needed to own that space and time.

Accepted and ready to rock and roll! We compete on Sunday at 10:08am Brazilian time (6:08am in California). Let's do this Purds! In the meantime, I'm thanking my DG sisters for teaching me to do my make up and hair for OPENING CEREMONIES! #ITB #2hearts #purdilicious #struttin #olympics2016 pc:@goeventing #twohearts

The day before dressage, my coach Bea di Grazia walked up to Purdy and put her finger on his forehead. She said, “Purdy, who would have thought you would ever go to the Olympics?” It was one of those moments that still gives me a warm, fuzzy feeling, because it was like, Yeah, who would have ever thought?

I was about to be a participant in the Olympic Games. That was something that nobody could ever take away from me.

Bea’s plan the whole time we were there was that we were going to be positive in everything, and Purdy was on the same program. We were coming to showcase our talent and our ability and not looking at the scoreboard or the placing. The thinking was to build him up from the moment we entered the warm-up in the dressage ring, all the way into the arena, positive note after positive note: Yes, he’s in your outside rein; yes, he’s balanced… Everything just layered on top of one another, so that by the time we got in the ring, he was exactly the horse I wanted for that day.

A day I will never forget. Purdy was a Rockstar during dressage and was a perfect partner to our first dance on this world stage. Now I understand why the feeling of riding the Olympics is so magnetic. It was a magical day. Tomorrow Purdy and I will be tackling the cross country at 12:33pm Brazilian time (8:33am California time). Remembering the amazing feeling of today but also knowing tomorrow is a new day to ride. #2hearts #twohearts #olympics2016 #roadtorio #purdilicious

Cross-country was the biggest surprise for me. Thank goodness Derek di Grazia is also my coach, because that was one of the most grueling cross-country courses I’ve ever been on. We walked the course together, and one of the first combinations that came up, I’d never seen anything like it before in my life. And we’d walk on and I’m thinking, I’ve never seen anything like that before, either. And we still had to keep walking. The stuff kept popping up, and there was really no letup in combinations. It’s like each one had kind of a sick twist to it.

We got done walking and I tried to talk myself down. You can do this, you’re going to be fine. Derek said you can do it, so you can do it. We were walking back, and Mark Todd walked up to Derek and he said, “That’s the hardest mother-f-ing cross-country course I’ve seen in recent history.” A little while later, Phillip Dutton walked up to him and said something similar.

That experience taught me three things. It made me really glad, one, that I have Purdy, because he’s a killer cross-country horse. Two, I was so thankful to have Derek as my coach. And three, I decided that I going to wear my earbuds every single day for the rest of the competition because I didn’t want to hear what one other person had to say about the course.

Spending time with the dude before cross country.

We were in the viewing tent before cross-country, and there were 20 flat-screen TVs of every angle on the course. The whole cast of eventing was sitting in there, plus all their coaches, and all their vets, and everyone was shuddering at the course. I think that moment, too, could have been really intimidating, and for me it certainly was. But I just kept going back to, This is my moment.

We didn’t have a clean round on cross-country, but I was happy I stuck to my preparation. When I could lean on that, I felt more comfortable in that scenario. But it was kind of crazy, seeing these amazing riders making mistakes because of the intensity of that competition. It was a male-dominated sport that day in the cross-country. If you saw the guys out there, they fought; they battled until the end. I’d never ridden a course that was quite so physical. And you saw that when men can ride horses, they can get physical like that. They really were the cream in that competition, and it was incredible to see someone like Phillip Dutton lay it all out.

I guess I’ll just have to keep going to the gym and eating my Wheaties!

My Puerto Rican team was made up of a lot of interesting people from a lot of different sports. I was the only equestrian, so I was kind of a new presence. At the same time, though, I looked around at my fellow teammates and saw that they had made a lot of the same sacrifices that I had. I don’t think that anybody can understand the true depth of that until you get there. All these people are so incredibly lonely but they’re so hungry. It keeps them going. I met a lot of people that were very similar to me in that way. We really sacrificed our whole lives to get to that exact time and place.

When I graduated college, I said that I was going to give it my all to go to the Olympics. I said that before I had the horse and before I had even gone three-star. And I did that. But literally, right up until the day before I show jumped in Rio, I had been telling myself that when I get done with this, I have to decide whether I was going to continue riding as a profession, or whether I was going to ride for fun and use my degrees (in eneolgy and chemistry). Even before cross-country, I think my nerves were more related to the outcome of that decision than the course in front of me. I just put so much weight on it.

When I came through the finish at Rio, it was instinctual. Before I could even ask myself the question, I had already answered it. I am doing this forever.

It was so cool, especially watching the medal ceremony. Phillip Dutton went to the Olympics five times before receiving an individual medal. I’m in this for the long haul, and I’m only going to have four more years of experience and be so much better when I go next time. And the time after that, the same.

Practicing my pageant wave. It's hard to believe that less than a month ago this happened. #pinchme #wesurvivedrio #olympics2016 #takemetotokyo #purdilicious #lbeventing

When I came home it was like, okay, it’s time to dive into really building up my training business. I just confirmed with Stonepine Estate, a wonderful barn in Carmel Valley, California, that I’m going to take over the bottom portion of the facility and start running my training business out of there. Everything is starting to come together, and I’m super, super excited.