Home > Blog > Horses in the Headlines > Owners Put Horses in Backyards, Resort to Riding to Safety in Fort McMurray Blaze 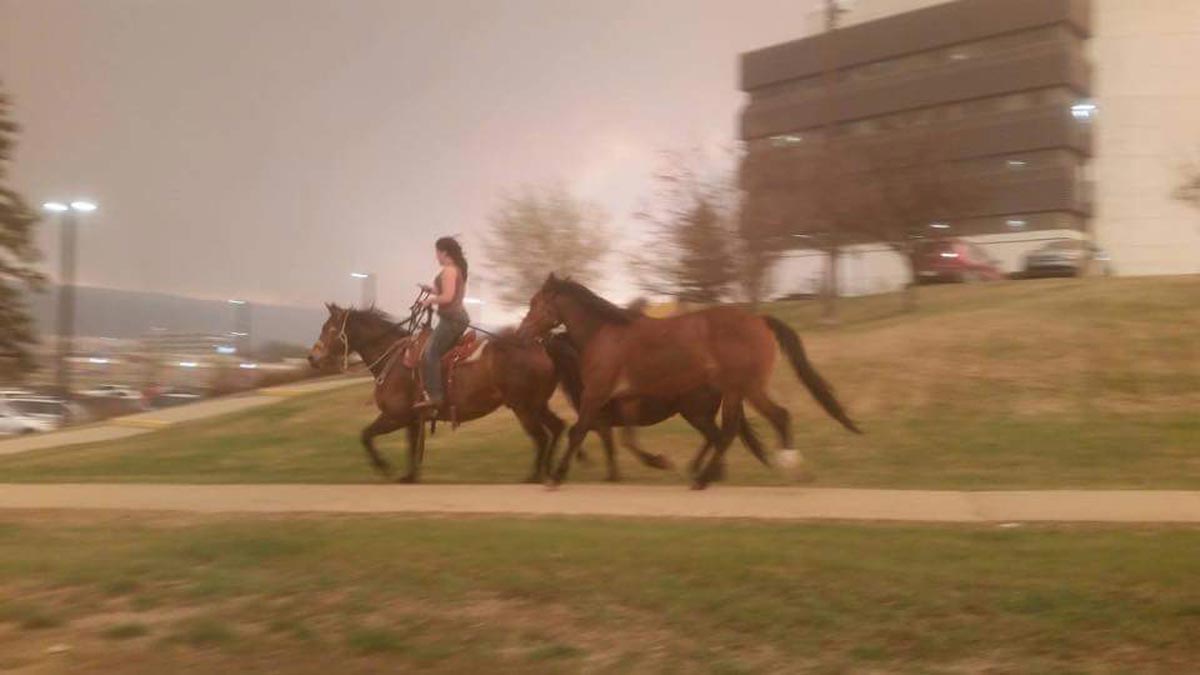 As wildfires raged in and around the northern Alberta city of Fort McMurray this week, desperate horse owners banded together to evacuate their equines, with some even resorting to riding their animals to safety.

Earlier in the week, the Clearwater Horse Club evacuated more than 100 horses from the south end of the city to the north end in a campground with a pasture. However, by Tuesday afternoon, the winds had changed. “We quickly realized this was no longer a safe place for them,” says Charity Wiley, public relations director for the Clearwater Horse Club.

A client photo from Clearwater Horse Club in Fort McMurray, yesterday during the evacuation. All are safe #ymm pic.twitter.com/JPVykeBYO4

Within two hours the area was engulfed in flames. While some horses were loaded onto trailers in time, others had to be ridden to safety, and still others were just turned loose to outrun the fire. “It’s hard to say how many were let go,” says Wiley, who adds they are safe wandering in a residential area that hasn’t been hit by the fires. “It’s just a matter of picking them up from front yards.”

The pressing issue now is moving the horses out of the north end of the city, back to the south end. The Clearwater Horse Club was not damaged by the fires because of the wind change. “At this time our club is no longer under threat so our ability to access hay and water is just fine, we just need to get the horses moved,” she says.

Wiley says she’s been so busy with the horses, she doesn’t know if her house has burned.

Earlier in the week, Fort McMurray resident Stacy Clough brought three horses to safety from the Clearwater Horse Club, turning them out in her backyard in the Eagle Ridge neighborhood of the city, near the Athabasca River.

“They’ve honestly been really great,” Clough told the CBC. “They’re just enjoying the grass. I put a bunch of hay out for them and brought their big water trough when we evacuated the barn. They’ve just been kind of hanging out and moseying around. They’re just kind of enjoying city life and taking in the sights.” 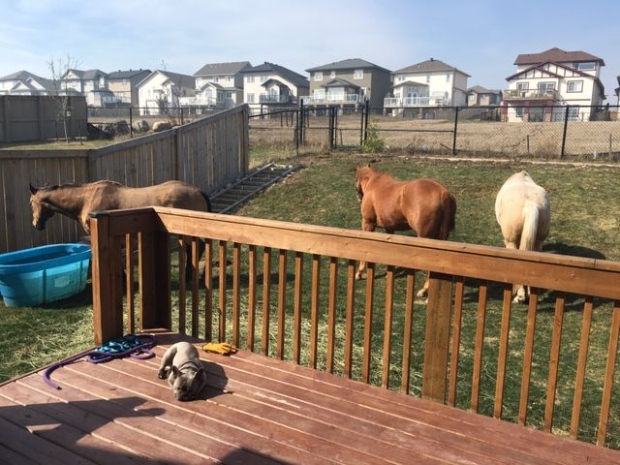 This photo, supplied by Stacy Clough to the CBC, shows three horses she brought to her backyard to keep safe from the wildfires.

More than 80,000 people have fled the city in the largest fire evacuation in Alberta history, with some neighborhoods being entirely decimated by the flames. On Tuesday, vehicles were lined up bumper-to-bumper on the highway with residents trying to escape.

All the fires within the city of Fort McMurray are now extinguished, but officials are warning that hot and dry conditions could spark the flames again at any time. So far no deaths have been reported. For more information, visit the Supporters of Alberta Animal Rescue’s Fort McMurray page.