A Look Back at “Old Devon”, An All-American Horse Show

Home > Blog > History > A Look Back at “Old Devon”, An All-American Horse Show 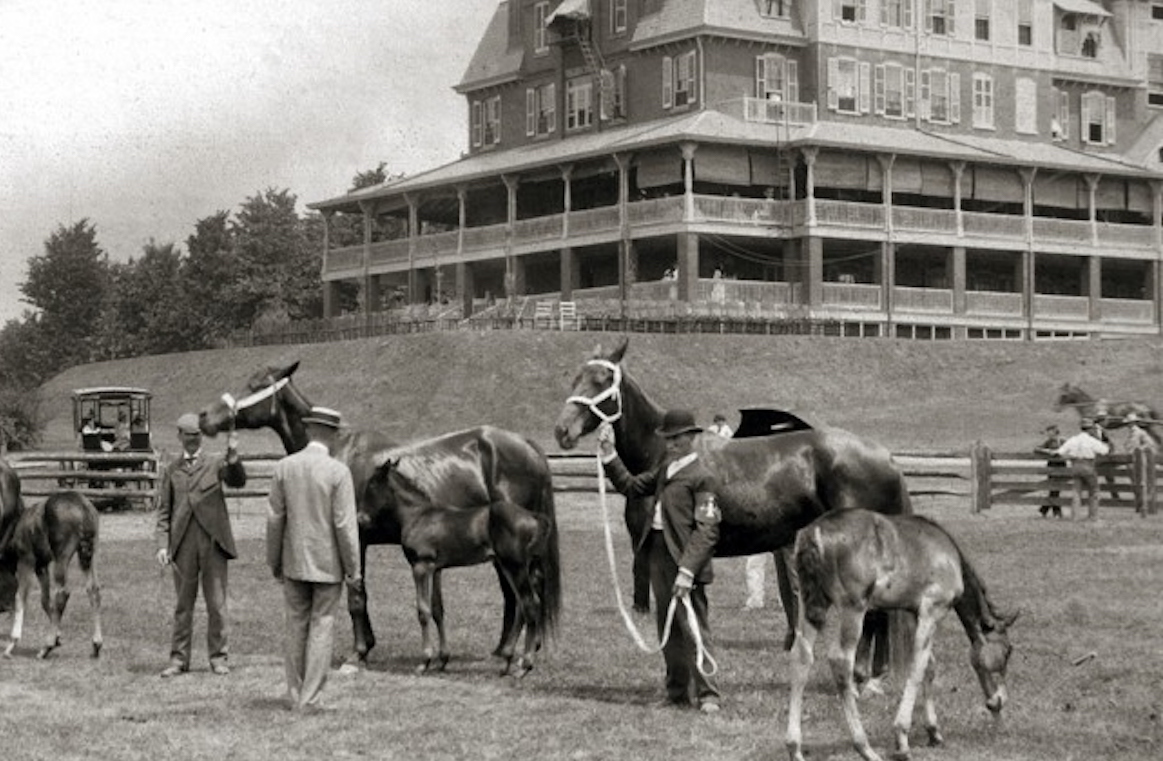 In its nearly 120-year history, the Devon Horse Show in Pennsylvania has worn many hats. Founded at the turn-of-the-century by a pragmatic group of country gentlemen looking to improve their carriage stock, the show that began as a favorite local pastime went on to become a high society benefit and then a bustling country fair.

In its own way, Devon has also been a microcosm for America at large, a place where pivotal 20th century events, including women’s suffrage and the Second World War, played out in small ways across its genteel rural stage. With the 2016 Devon Horse Show and Country Fair just a few days away, we’re taking a look back at the key events that helped to make “Old Devon” into one of America’s most illustrious and beloved horse shows. 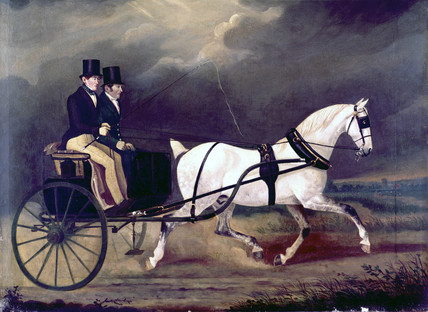 Once upon a time, an influx of wealthy settlers pushed west into Philadelphia’s fertile, rolling countryside. Settling along the “Main” railroad line, a group of Chester County gentlemen met to discuss ways to improve the local horse population required to pull their coaches and buggies. In July of 1896, the men founded the very first, one-day Devon Horse Show, offering 28 classes of competition for their friends and neighbors. 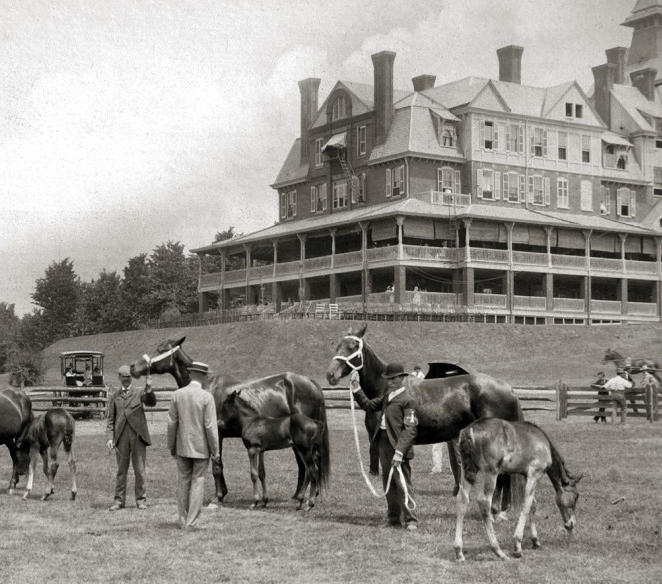 During the early 1900’s, the Devon Horse Show was held on the lawn of the town’s famous Grand Dame hotel, the now defunct Devon Inn. By 1914, the first year of WWI, Devon had established itself as the largest outdoor horse show in the country. It had also earned a reputation as a spectator sport for the community, offering a grandstand and a new 46-box seating section for its wealthy patrons, complete with canvas awnings.

The show went in a new direction in 1919 when, just a year before women across America earned the right to vote, a female coalition at Devon worked to merge the horse show with a new country fair initiative to raise money for nearby Bryn Mawr Hospital. The benefit’s model was a success, and the show’s charitable partnership with the hospital continues to this day. In fact, since 1919, the Devon Horse Show and Country Fair has raised more than $14 million for Bryn Mawr. 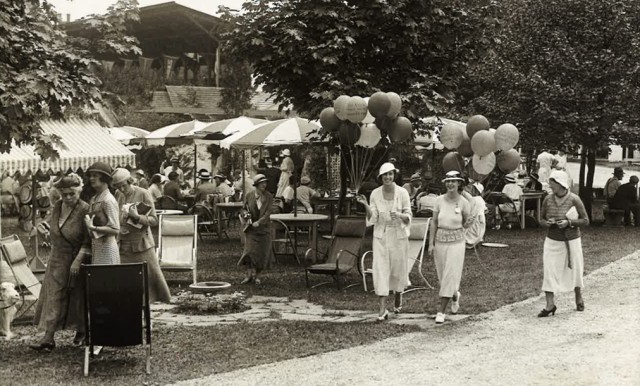 Devon in the Roaring Twenties was an elegant and festive affair. Ladies wore gloves to the show grounds, a dance floor was set up near the main ring, and tea and sandwiches were served on silver trays. There was even an organ grinder to stroll the byways, playing his tune with a monkey on one shoulder. Funded entirely by the community, Devon volunteers baked fudge and clipped flowers from their own gardens to sell to spectators at the show’s thatched-roof shops.

During the 1930’s, the show grounds at Devon began to take on the physical layout that we recognize today. Competitors who returned year after year built their own stabling along the facility’s eastern quarter, and by the end of the 1920’s, the area was completely lined with barns. An underground drainage system was installed, and by 1938, Devon could provide stabling for more than 600 horses. 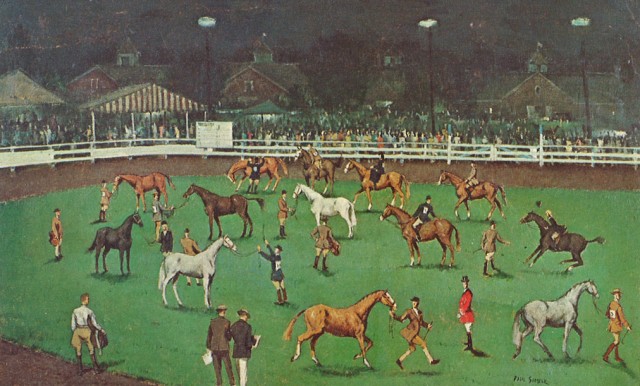 The 1940s marked a period of change for the horse show, beginning with the first night classes under the lights in 1940. But by 1941, the winds of war were sweeping the world once again. At Devon, a U.S. Army Airforce recruitment station was set up on the grounds, announcers broadcast President Roosevelt’s speech over the horse show loudspeakers, and in a show of solidarity, officials hung British and American flags side-by-side on the grandstand. By 1942, America had entered the war, and although a horse show was held that year, in 1943 and 1944, a dog show took its place. In 1945, with the end of the war at hand and all the world mourning, there was no show of any kind at Devon.

During the 1950’s, the elite of Devon society could no longer support a week-long horse show and exhibition on their own, and volunteers began to turn over the reins of the Country Fair Village to visiting merchants, who set up antique shops and boutiques. Show organizers expanded the Country Fair portion of the show, adding a midway and Ferris wheel, dairy bars, and flea markets that began to draw their own crowds—crowds that often had little to do with the Devon Horse Show itself. 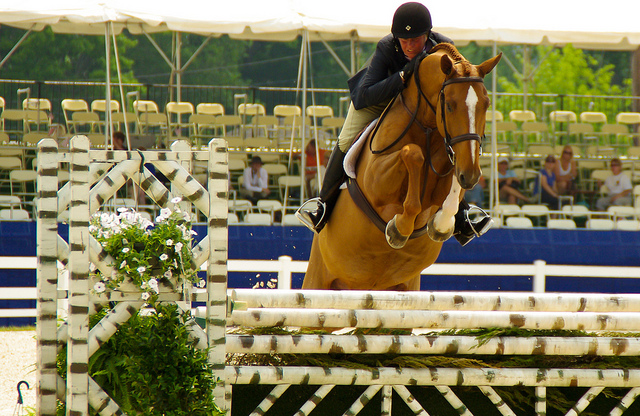 Today the Devon Horse Show and Country Fair is the longest-running and largest outdoor multi-breed competition in the United States. Next week (May 26-June 5), a world-class field of competitors will return to Devon once again to write their own page of history for the books.

To learn more about Devon’s history, check out “Discovering Devon”, a book created in partnership with the local Tredyffrin Easttown Historical Society and packed with more than 100 photos of the Devon Horse Show through time.