Hope Glynn: 8 Things I Look for in a Close Contact Saddle

These days, California-based hunter rider Hope Glynn of Sonoma Valley Stables in Petaluma has a full plate. With 40 clients, 53 horses and ponies in training, and a busy on-the-road schedule of more than 25 shows a year, Hope and her jumper rider-husband Ned Glynn have plenty to keep them occupied. Not to mention keeping up with their 10-year-old daughter, Avery, who’s busy taking the pony divisions by storm. “For sure, my best equestrian memory to this point is being able to be at a horse show, competing alongside my daughter, and alongside my husband,” Hope says. “At the highest level, we’re out there, enjoying horses together.” 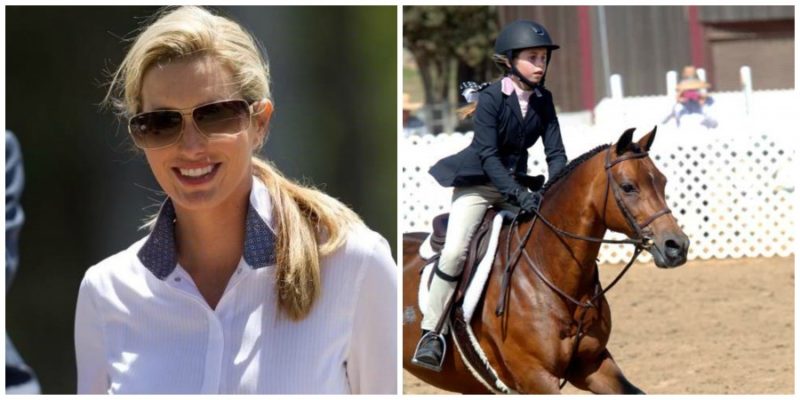 But if there’s one thing Glynn doesn’t have time to worry about, it’s messing around with the wrong saddle. Thankfully, the Voltaire Design-sponsored rider of three years knows what’s important when it comes to selecting a saddle for the hunter ring. And now, you do too. Here are eight things Hope Glynn looks for in a close contact saddle.

1. When it comes to rider comfort, it’s all about feeling and texture.

“I feel I ride a little bit light in the tack with my seat most of the time,” says Glynn, noting that the design features of her Voltaire Palm Beach and other modern close contact saddles—including the thinness of the flaps, and the special “sticky” texture of the leather—make all the difference in her ride.

2. If you want a good fit, start with the tree.

“I’ve tried a ton of different saddles on a ton of different sized animals over my career as a hunter rider,” says Glynn. What does she look for? A flexible tree that feels good, stays up on the back, and that isn’t “…so built up that I feel like I can’t ride connected with my horse.”

3. Not all hunter riders prefer a shallow seat.

“I don’t like a totally flat-seat saddle,” says Glynn, noting that although many hunter riders think a more level seat will offer better contact with the horse, Glynn prefers the feeling of a half-deep seat and a wider base of support.

It’s no secret that a majority of today’s top performance hunter and jumper saddles hail from a country long renowned for its leather craftsmanship. “I knew that all the best saddles were made in France,” says Glynn. “I think my favorite design feature of my saddle is the fact that when I lift my flap up to tighten the girth, it says, Made with love in France [laughs]. No, as a joke of course, [but] I think that’s a cute touch.”

5. Don’t count out the double-flap.

“I think for a while, people maybe chose single-flap saddles if they didn’t feel like they could get connected to a horse,” says Glynn. But a thinly designed double-flap saddle can work just the same way. Of her own double-flap model, Glynn says, “I feel like there isn’t a big barrier between my legs and the horse that I’m riding.”

6. A thicker girth can work wonders.

A girth that is slightly thicker in design can improve fit and offer a wider base of support for the saddle. “I think that it fits [better], and it doesn’t slip as much on my horses,” says Glynn.

“I think there isn’t anyone who would argue a lighter saddle is better,” says Glynn.”Any time your horses are jumping any sort of height, whether that be in the international hunter derbies or the international Grand Prix ring, lighter gives your horse an advantage. Whether you’re a tall rider like myself, or you’re a short rider, less weight in the tack is less weight on your horse’s back. It’s going to make for a better performance, as well as…a sounder horse in the long run.”

In a subjective sport, turnout and attention to detail is everything—and even your saddle can play a role. “In the hunter ring, you want beautiful-looking tack on a beautiful animal,” Glynn says.

Like what you’re reading? Head on over to Voltaire Design for more saddle-choosing tips and inspiration.