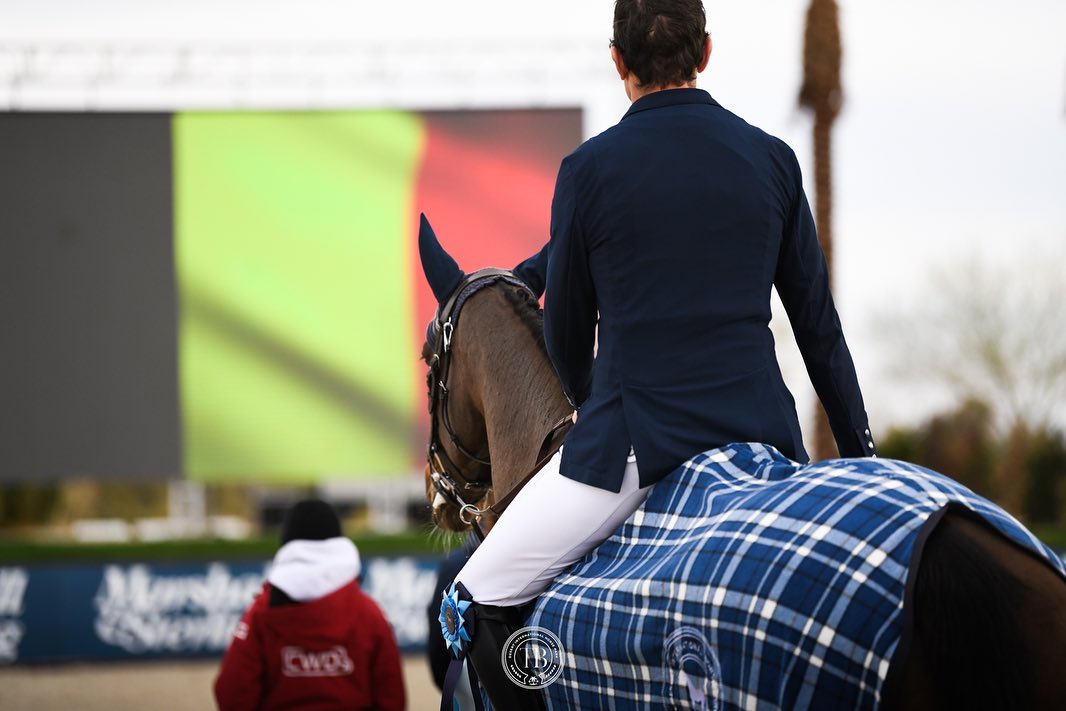 If the crowd at Desert International Horse Park (DIHP) wasn’t familiar with the drum rolls and triumphant trumpeting of the Belgian national anthem before, they certainly are now.

As round one’s pathfinder, USA’s Kaitlin Campbell and Feyon were first to return for Colm Quinn’s short course, finding a smooth galloping track to put a pair of duck eggs on the leaderboard. The pair posted a time of 39.81 seconds.

Their grasp on the lead was brief, however. Next in the ring, Wathelet and Berline du Maillet Z shaved almost three seconds off, stopping the clock in a speedy 37.03. Laure Hite (USA) and Chagall de Toscane completed the course in 42.69 for third.

“At the end, I was a bit lucky to the last one,” said Wathelet. “She twisted a bit to the right. But for the rest [of the course], she jumped well, and it was exactly the plan I wanted to do.”

It’s the second trip to the winner’s circle this week for the 12-year-old Zangersheide mare. Berline du Maillet Z also won Thursday’s Hygain 1.40m Two Phase CSI3*, but had an uncharacteristic eight faults in Friday’s Morning Star Sport Horses 1.50m Speed CSI3*. According to Jumpr App stats, the mare averages just 2.64 faults at 1.50m. In 11 rounds at the height, she has only once before pulled two rails.

With that blip on the radar, Wathelet’s change in his game plan for Saturday was no change at all.

“I cannot really say I prepared her for today,” he said. “I did the speed class [on Friday] and she gave a good feeling. She jumped well, but I tried to still go for the time [and] … she had two rails. Normally she doesn’t really do that, not like that. And today she was perfect. She was nice, relaxed, easygoing.”

An Olympic team bronze medalist (2021) and European team gold (2019) and individual silver medalist (2015), Wathelet has the hardware to inspire fear in his competition and frenzy in show jumping fans. But, he said, there are still plenty of riders he continues to learn from, including one frequently seen at Desert International Horse Park.

“We are lucky in Europe there is so many good riders with different systems and different riding. For me, it is very important to try to take the best of each rider and improve myself all the time, because we know that this sport is going up and is so fast now,” he shared.

“I cannot say I have one person that I really admire. I mean, I was a big fan, like many people, of [Britain’s] John Whitaker and also one that you know here, Eric Navet. When he was in Europe [20 years ago], he was such a super rider, super technique, super plans. I was lucky at the time he was still in France and I have learned a lot from watching him. I didn’t really have the chance to train with him, but that was one of the riders who inspired me.”