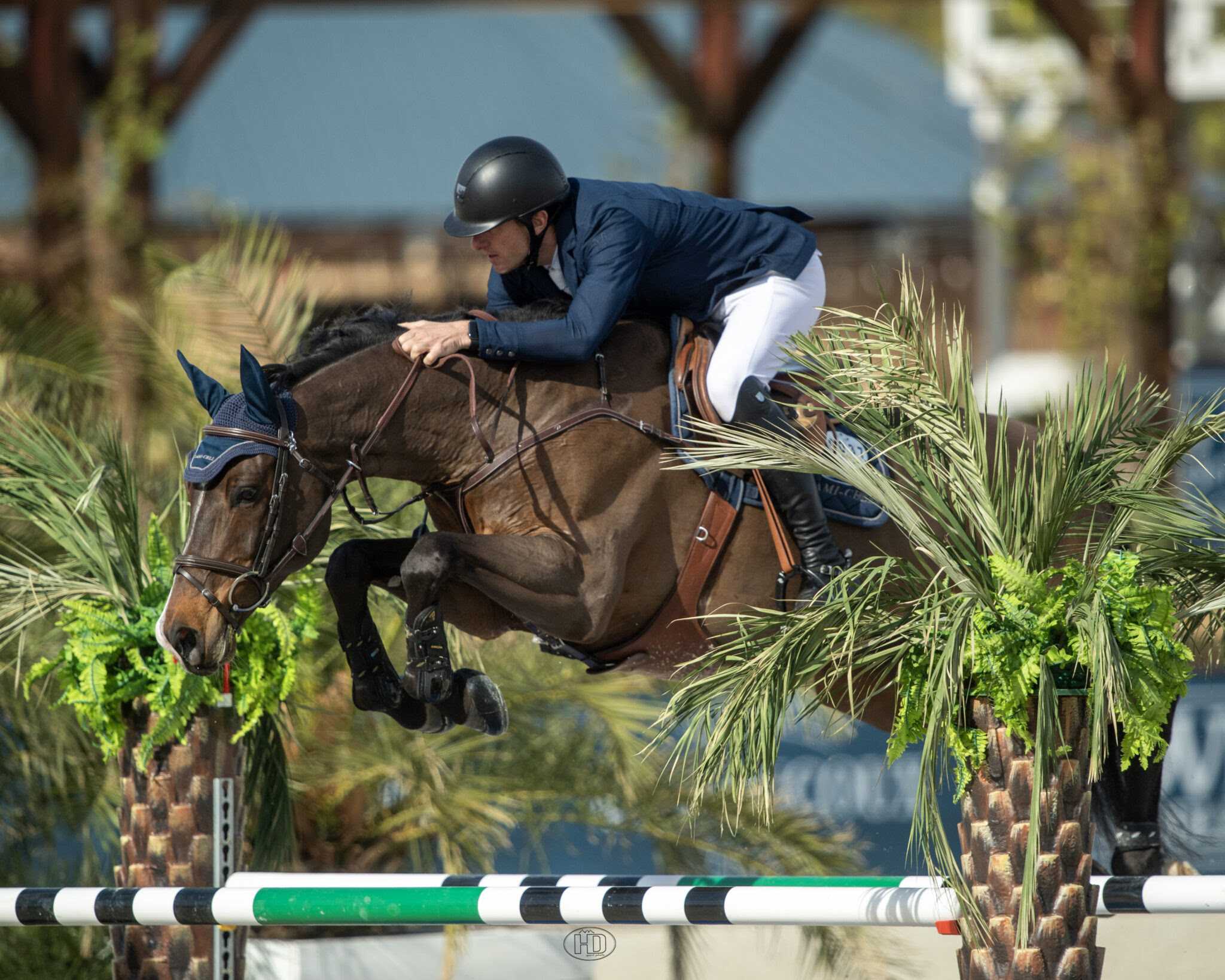 “It was just to try something else, something new,” said the 2020 Olympic team bronze medalist. “I wanted to change a little bit for the winter time instead of going to Spain in Europe.”

His trip across the pond to Desert International Horse Park (DIHP) in Thermal, CA is already paying dividends.

Wathelet and Berline du Maillet Z topped a field of 29 in the $5,000 Hygain 1.40m Two Phase CSI3* on Thursday, the first international class of the 2023 Desert Circuit season. He and the “super careful” mare produced a second-phase time of 26.99 seconds over the Colm Quinn (IRL) designed power and speed track.

“The plan at the beginning was not to go really fast. [Berline du Maillet Z] hasn’t jumped for six weeks now because we had to fly here [from Europe] and quarantine. And then she didn’t jump at all in the last three weeks,” explained the world no. 33.

“I wanted to feel how she’d be because sometimes she can be very careful, but from the beginning, I felt like she was really nice, easygoing and feeling confident. Then in the second phase, I just went a little bit with her.”

The 12-year-old Zangersheide mare is one of four horses Wathelet has brought to the desert.

“I wanted to see what kind of level it was here; it’s always difficult to say and compare what you can get here to Europe. I brought some horses who have had really good results in two- or three-star shows in Europe…so it’s a good fit, I think, to at least try to be competitive here. That’s my idea.”

Berlina du Maillet Z, the mare he captured Thursday’s class on, has a 71% clear round rate in 17 rounds at 1.45m with Wathelet and has shown up to 1.55m, according to Jumpr App. The pair has earned 10 podium finishes in 50 international appearances since 2021, highlighted by top three finishes at CSI5* events in Grimaud and Bourg-En-Bresse in France and St Gallen, Switzerland.

Wathlet is also competing Argentina de la Marchette and Clarity in the international division this week.

Argentina de la Marchette is an 11-year-old SCSL mare and has been campaigned by Wathelet since 2018. She has a 64% clear round rate in 22 rounds at 1.40m and has earned 14 podium finishes with the Belgian rider, including eight victories (Jumpr App).

Clarity, a 14-year-old German warmblood gelding, has been in his string since 2021 and is also campaigned internationally by Marie Valdar Longem (NOR). Wathelet has shown the horse exclusively in CSI5*-W events since July, competing up to the 1.60m level. They have a 23% clear round and top 10 finish rates at 1.50m, including CSI5* top five finishes in Brussels (Belgium), London (England) and Dinard (France).

Wathelet also brought Ace of Hearts to California, his longest standing partner of the four. This week the 13 year old stallion is competing in the national division and also captured a win on Thursday in in the $30,000 FarmVet 1.45m Open Classic. The pair crossed the timers in 59.738 seconds, over four seconds faster than runner ups Elisa Broz and Crispo R (64.044).

“[Ace Of Hearts] is a really, really careful horse,” Wathelet said. “He’s older but very green because he was injured for quite a long time. He’s been back for over a year and is a really good jumper. I wanted to start National this week and increase next week, and the next tours go a bit higher. The quality is very good. I’ve had him since he was five years old but he spent about four years out between [ages] 8 and 11.”