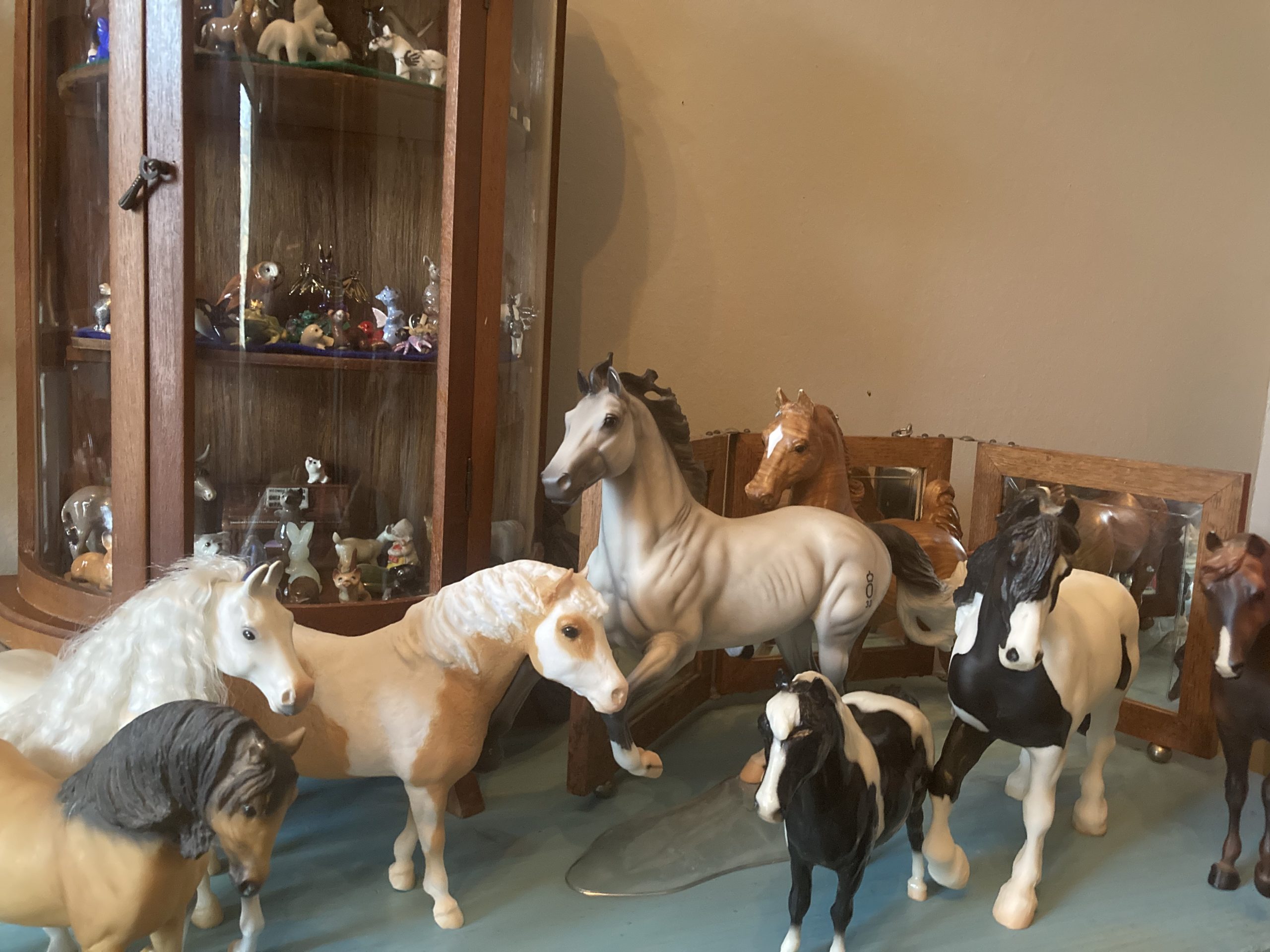 procrastination is the
art of keeping
up with yesterday

I opened a box of Breyer horses from my childhood the other day.

I could say it was the lure of nostalgia or a waiting display case that motivated the unboxing, but the truth is I was avoiding my grown-up work. The shelves I plan to display my Breyer models on are still unfinished.

There was one in particular on my mind, though.

I was searching for The Gypsy King, the model of the Tobiano Vanner, made in 2001, back when the breed was still novel in the United States.

As I opened the box and the smell of old newspaper filled the air, I said a little prayer that he wasn’t at the bottom of the box and that I didn’t have to unwrap every protruding hoof or hint of mane until he finally emerged.

At the box’s top were ziplock bags on Stablemates, the miniature Breyer models that were perhaps my gateway drug to the larger models. “These will look cute in my office,” I thought, putting them in a separate box next to my bag of books ready for work. It was only after I had set aside 40 did I wonder what my coworkers would think of a herd of tiny Thoroughbreds, Quarter Horses and various other breeds prancing across my cubicle.

Still, I decided to lean in. If they think I am a crazy horse girl, well, the shoe fits.

Deeper into the box I unearthed the larger models. The Norwegian Fjord wrapped in 12 year-old newspaper. A black Andalusian. Misty of Chincoteague.

Prior to opening this box, only two Breyer models had the privilege and the peril of moving with me over and over these past ten years.

The first was a strawberry roan Peruvian Paso with three white stockings. He originally belonged to my Grandmother, who was a breeder. Out of her collection, he was the only one I saved after she passed away. I took him because he made me laugh.

“Ack,  Peruvians aren’t supposed to be that color,” I can hear her saying as she spotted him on a tack shop shelf. “But there needs to be a market for them, so we better buy this one.”

The other was the fine-boned model of the late Sshameless++, a gift from my two roommates at the time that worked for the Arabian Horse Association. A joke about everyone owning “Majestic White Arabian Stallions” became a regular part of our household banter. On that fateful birthday, they texted me all day long, swearing that they would bring me a white steed. They were good on their word, and now the plastic stud holds up my partner’s copy of The Art Of War and looks just as regal as he did the day I got him.

As the layers of newspaper started thinning, my orange cat seized the opportunity to leap in and make himself comfortable, pleasure and mischief dilating his pupils. The newish cat and the oldish Breyers. I smiled, pulled out his liquid form, and reached for another newsprint-wrapped model.

As the plastic equines of my past emerged, something oddly prophetic happened. Each horse I unboxed reminded me of one that has come into my life since I packed those Breyers up, lo those many moons ago.

A big grey sport horse looked like the one that had dumped me during a dressage lesson. A little buckskin Lusitano reminded me of the yearling of the same breed and color I helped hold for a friend as she tried to wrap up his wounded leg. Unwrapping the Paso Fino, I heard hooves on the nighttime pavement because it was the same breed as the ones running wild on the island of Vieques in Puerto Rico, where I had vacationed a year before. Then I found the Gypsy King among the pile, and even he looked like many horses of my past.

While these Breyers are magical to me, I have only acquired a few since. With the constant moving of the last decade, one more thing acquired meant one more thing to pack up and carry. When I opened this box, though, I realized how vital these toys were to my education and obsession with the equines that fill my life. Talismans of my horsey-existence.

Now, I am in a more stable place, they can dance on the shelves in peace. Just as soon as I get around to finishing them, that is.