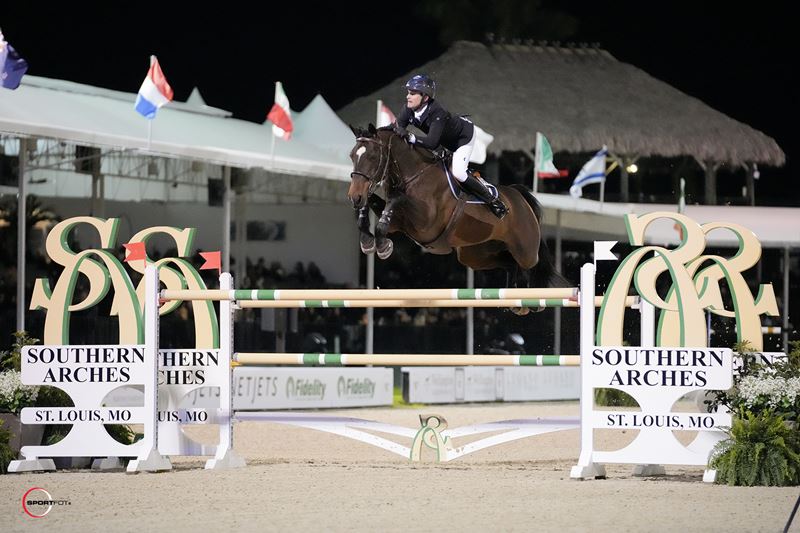 “For him to win here, and on my birthday…just wow,” said a ringside Teddy Vlock (ISR), who stood beaming as Darragh Kenny (IRL) and Volnay du Boisdeville galloped victoriously around the International Arena.

Kenny and the 14-year-old stallion owned by Vlock Show Stables proved to be unbeatable in the “Saturday Night Lights” Southern Arches CSI3* Grand Prix during Week 1 of the Winter Equestrian Festival (WEF).

Kenny was the first of six combinations to jump-off. While a generally unfavorable position, the Irish rider put down a blistering time of 37.58 seconds over the Nick Granat (USA) designed track. It was enough pressure to push the following five to collect rails in an effort to catch his time.

Maybe it was the Irish wind in Wellington, or the continued momentum of a winning 2022 season, but bringing home the title made a perfect birthday present for Vlock. Undoubtedly an extra surge of motivation, Volnay is also a special horse for Vlock.

“He seriously loves Volnay. I’m not kidding. He has a tattoo of him on his chest,” said Kenny of Vlock, who later posed for a tattoo photo op in the winner’s circle.

Previously campaigned by Vlock, Kenny took over the ride on Volnay when the Israeli Olympian took a break from riding. Though despite his hiatus from the saddle, he remains no less devoted to show jumping. Whether or not we see him in the ring anytime soon, he’s excited to be riding at home again.

“Best birthday present to myself is getting to be back in the saddle,” Vlock captioned a between-the-ears Instagram story posted on Saturday morning.

“Never mind, the best birthday present was my favorite horse ever winning the Grand Prix,” he later amended.

He’s Vlock’s heart horse for good reason. According to Kenny, the stallion has no shortage of talent and admirable qualities both in and out of the ring.

“He’s an incredible horse. I’ve been riding him about a year and a half now. He’s better when he’s fresh. The cold weather was a good factor for us tonight because it had him a little fresher than normal,” said Kenny.

“He’s really simple. He’ a stallion but not a stallion at all…You can trust him at the jumps and he’s very fast in jump-offs. I knew it was a competitive jump-off, so I just tried to go as quick as I could and hope that the jumps stayed up.”

Volnay has knack for rising to the occasion no matter the weather. A second place finish in July’s Longines Global Champions Tour (LGCT) Grand Prix of Monaco CSI5* and a CSI5* 1.50m win in December at Major League Show Jumping (MLSJ) Thermal are among his shining accolades.

We can break down the stats all day long, but there is no way you can really quantify the feeling of a serendipitous Grand Prix win.

“It was a magic night in the end. He loves this horse, and he picked a fantastic night to win,” said Kenny.

Kenny, Volnay and Vlock weren’t the only ones to receive recognition on Saturday night. The $500 Grooms Award was presented to Vlock Show Stables groom Alejandro Suarez by Double H Farm.

“We are really happy to do this for the second year in a row. The grooms are an integral part of the whole operation,” said Quentin Judge (USA) of Double H Farms.

“We wouldn’t be able to be here if it wasn’t for the grooms, and we think it’s important to recognize them. It’s a hard job and it’s nice when your horse jumps well to recognize them for it.”

The win is a reminder that success takes a team effort, and with the first Saturday Night Lights is officially in the books stables are gearing up for a long season ahead.