Home > Blog > Dressage > Lyle & Salvino Do It on Their Own Terms 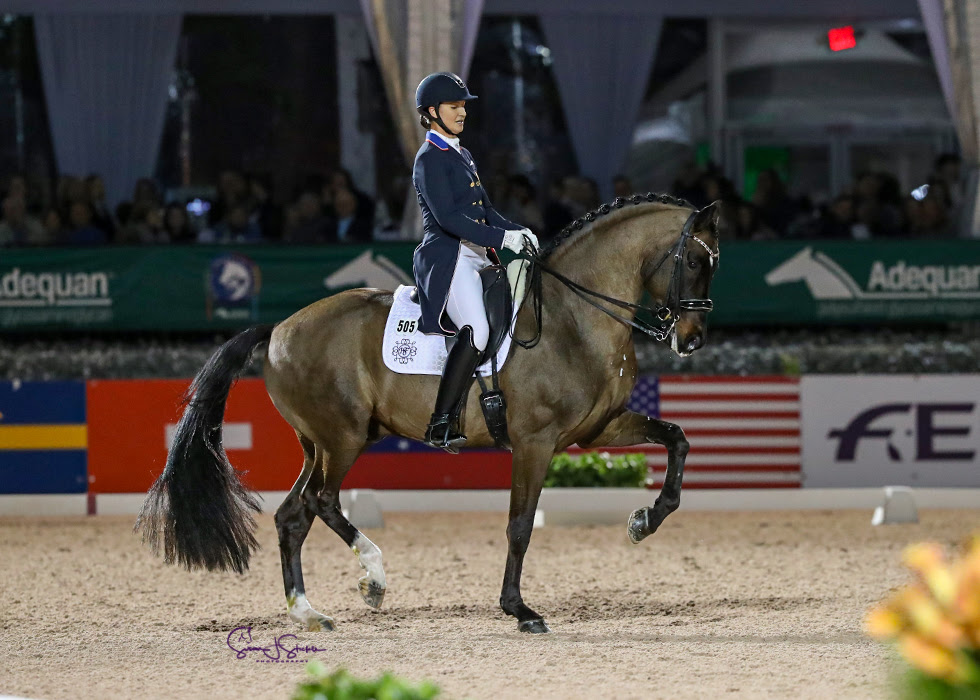 In ballroom dancing, dancers are designated as either a lead or a follow.

In dressage, which is compared to dancing more often than not, you could look at the rider as the lead and the horse as the follow. That is, unless you’re talking about Adrienne Lyle (USA) and 16-year-old Hanoverian stallion Salvino, and their FEI World Cup™ Grand Prix Freestyle. In that case, they both have their moments to shine under the Friday Night Stars at the Global Dressage Festival in Wellington, Florida.

“We did most of the things on my terms, and some of the things on his terms, but like any good relationship it’s all about compromise, and he feels great,” said Adrienne Lyle, who also won Thursday’s qualifying Grand Prix.

Their graceful footwork in the 60 x 20 translated to 83.54% on the scoreboard, putting Lyle and Salvino in a league of their own. Their top points were awarded by the 5* judge at H, Mariette Sanders-van Gansewinkel (NED), who tallied 86%.

It was an uncharacteristically cold night in Wellington, but in spite of the chill in the air Lyle and Salvino were feeling nothing but heat.

“I’m super thrilled to be here again at this amazing venue and I was happy to see how packed it was despite this cold weather. Salvino felt great, he was fiery and very excited to be here,” said Lyle.

As excited as she is to be back in Wellington, she’s already looking ahead to a bigger goal in Omaha, Nebraska for the FEI World Cup™ Final. Lyle is aiming to secure one of three places designated for the North American League riders.

At present, the top three leader are Steffen Peters, Alice Tarjan and Anna Buffini. Lyle is taking up ranking real estate in 10th position, but considering her record and recent top performances it’d be a major upset if she didn’t claim a ticket.

Lyle and Salvino rode to the silver medal for team USA at the 2020 Tokyo Olympics, and before that they were team silver medalists during the 2018 FEI World Equestrian Games in Tryon, North Carolina. Last season, they also broke an Adequan Global Dressage Festival record, recording the high score to date with an 85.58% in the Grand Prix Freestyle CDI4*.

With three World Cup Qualifiers yet to be contested, all of which are in Wellington, all eyes are on Lyle and Salvino.