Home > Blog > Amateur Hour > He Golfs, I Ride: Making It Work Is Harder Than You Might Think 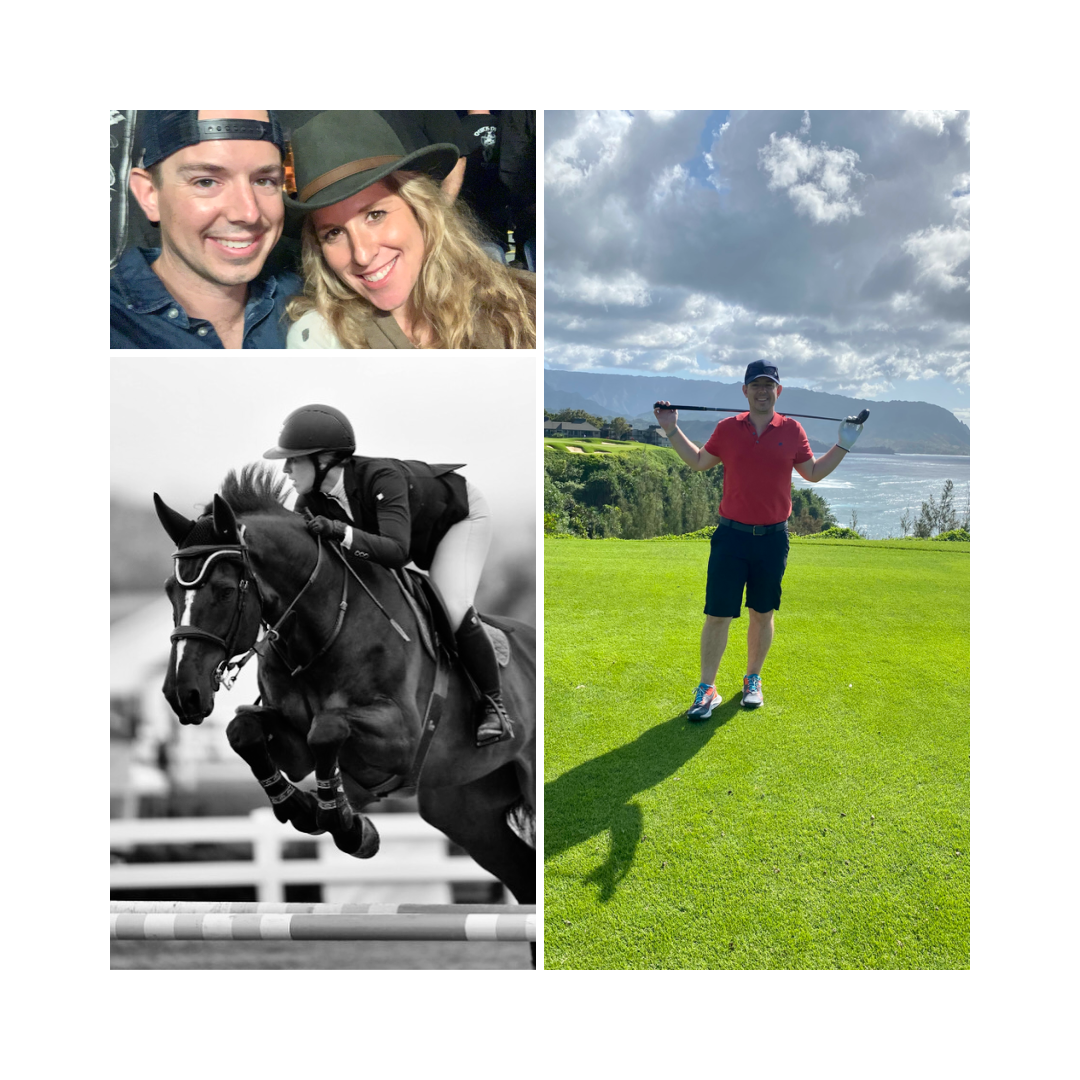 My husband and I lead separate lives.

Not strictly in the traditional sense. We’re not consciously uncoupling, or Kris and Caitlyn Jenner-ing; no one, I hope, is pulling an Adam Levine. But we do have two unique passions that come with separate and all-consuming sporting lives—a fact that leads to some unexpected challenges.

My husband Mike is a lifelong golfer. I ride horses.

Since moving back home to Upstate New York a few years ago, we’ve been forced to learn how to juggle our dueling passions, and how to share. Both of our sports come with short seasons up here, and so, we split our time on weekends doing what we love while taking shifts with our two kids (whom we also love) under three. Mike will bang out nine holes at the club, I’ll squeeze-in an hour-long riding lesson, then drive home from my barn—trying hard to stay under the speed of sound—an hour and 20 minutes away.

It’s a chaotic, scrambling-for-every-minute kind of existence, but for the most part, it seems to work for us. We’re celebrating our ninth anniversary this month, and with that mini-milestone, some hard-won lessons, complete with a few tears (mine), while coming to understand each other’s passions.

What have I learned so far?

A) Even compromise-oriented “solutions” are likely to feel a bit uncomfortable (i.e. You can do the classes you want at Week 1 at the horse show, but you’ll have to skip or pick and choose in order to be home for the bulk of Week 2).

B) There is no limit to the value of doing the work to try and see things from another person’s point of view, even your spouse’s. Or, in the words of the ever-sagacious Atticus Finch, “Climb into his skin and walk around in it.”

C) There is no Shangri-La. We will likely always have to struggle, squabble, and do the work to find balance, even if we’re better at it than we used to be.

Another thing I’ve learned? I love horses. My husband tolerates them. He’s never going to love them, or the sport of show jumping, like I do. Not only is this something I have to get used to, but it will forever impact the way we communicate as a couple. Exhibit A: A post horse show Sunday night dinner conversation.

Him: “How was your class this morning?”

Me: “Thanks for asking! The classic went great—I originally walked a seven in the bending line from three to four, but I knew there was a six there if I could control his right drift. In the jump-off, though, we were actually getting down there really easily, so I got there a little early, and I didn’t protect the front rail enough, and we had that down.”

“Mmm-hmm, gotcha. Well, it’s good that you still got some prize money, right?”

Would I love to spend dinner together geeking out about my favorite sport? You bet. Will it ever happen? Not likely. And, putting myself in his shoes, I have no doubt that my eyes begin to glaze over when Mike starts talking about “attacking the dog legs” and “shaving a couple off his handicap.” You know, Greek stuff.

If I’m being honest, my love for riding is—like Mike’s own for golf—a pretty self-contained thing. I don’t need my husband’s validation to enjoy horses, though certainly, his support of the financial commitment it demands from our family is essential. And I believe it works the same way (though to a lesser financial extent, **sips coffee**) for his golf club membership.

But are there different ways for a relationship like ours to function? I’ve seen other couples—plenty, in fact—with a totally different kind of arrangement when it comes to support mentality. Friends whose dudes show up at the ring with coffee, and smilingly hold horses, carry lead ropes and coolers, and ride every stride along with their partner as if he were out there doing it himself.

I don’t know if these female-riding counterparts are equally invested in their guy’s golf, snooker, or Fortnite habits, but at face value, it’s easy to feel envious of their relationships. Pairs, I imagine, who not only have a love of horses in common, but far more stimulating dinner conversations. (To be fair, though, you never know what goes on inside someone else’s home.)

For the more than 15 years Mike and I have been together—first as indoor soccer teammates in college, then as boyfriend/girlfriend—he’s always golfed, and I’ve always ridden. If there is a reason for disappointment, I think, it’s of my own making.

At the outset of our relationship, I naively thought things would end up differently. That one day, he would be there by the ring, toweling off my boots, painting my horse’s feet, and reviewing course notes with me. But he’s never going to be that guy—and it’s not his job to be. Unless I plan to return the favor by riding along and golf-clapping his every shot (and there’s not enough G&Ts in the world to make that a reality), we’ll have to make do, gratefully, with the arrangement we have.

More to the point, even if we found a way to 50/50 split our personal commitments, that alone would take away from the many things we do have in common. Things like hanging out with our kids, firstly; but also hiking, skiing, and being outside; traveling and eating; and spending time with our friends.

With a little perspective and a lot of self-talk, I’ve learned to accept that our “separate lives” are actually A-Okay, at least for us. It’s how we roll, and, at the end of the day, we’re each (probably) a little better for it.

I respect that Mike loves to golf, that it’s part of who he is, and that, like me, it makes him a better person when he’s out there, working hard at his game and his mental health with each swing. From a purely selfish perspective, I see the value, too, in juggling our kids’ needs, household chores, and weekend commitments to allow him the time he needs for his sport, because I know, when it’s my turn, I’ll expect the same.

What’s more, I love the idea that he has something that makes him joyful in the same way that my horse’s nicker, the feeling of his nose in my hand, or his obvious excitement to see me at his stall instantly brightens my day. (Can a titanium driver return affection? Discuss amongst yourselves.)

And while I’ll probably never know what it feels like to finish two under par on the golf course, I do know what a clear jump-off feels like—that rush of adrenaline, patting my horse and looking up at the scoreboard and feeling awash with a sense of pride I don’t get from anything else. In that, I think, we can definitely meet each other halfway.

It will always be a work in progress, but learning to be happy for one another is a key part of the process. Appreciating, if nothing else, that the more joyful, fulfilled person that shows up for our family is, in large part, a result of that time we’ve spent away, doing what we love. Even if what we love has nothing to do with who we love.

But it doesn’t mean I’m going to stop trying to get him to take up polo.

How do you and your partner handle your passion for horses? Is it something you share? Do you meet halfway? Is it a source of conflict? Let’s chat about it in the Facebook comments!