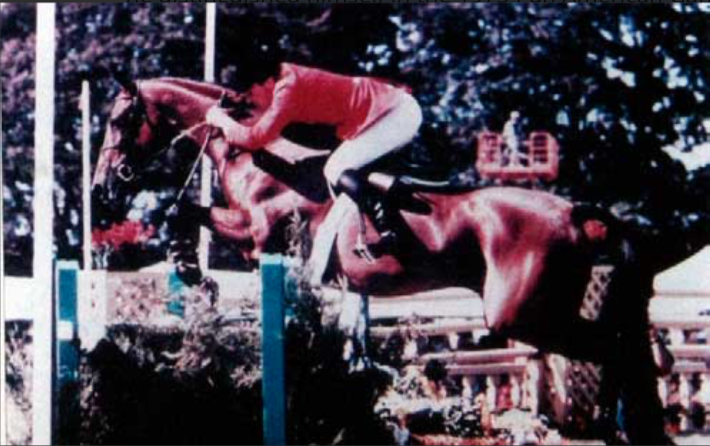 Foaled in 1968 and bred to run, Jet Run might have been expected to be a successful racehorse.

Instead, the 16.3-hand bay gelding turned out to be one of the most consistent “big occasion” show jumpers of his era, winner of no less than three Pan American Games Gold Medals (two for the U.S., one for Mexico), the World Cup Final, the President’s Cup, the AGA Horse of the Year title, two World Championship Bronze Medals, and innumerable Grand Prix and individual competitions.

Bred in Maryland at Winter Place Farm, by Jet Traffic out of a Heliodorus mare, Jet Run was ridden in hunter and jumper classes by Bernie Traurig and Melanie Smith and achieved early prominence by winning the New York Grand Prix at age six.

Sold to Mexico shortly afterwards, he distinguished himself in the 1975 Pan American Games with Fernando Senderos, winning the individual Gold and a team Silver. Jet Run remained in Mexico ownership through the 1976 Olympics, in which he and Senderos finished 21st.

Thereafter he was purchased by F. Eugene Dixon and brought back to the U.S. for Michael Matz to ride. He quickly found his best form with his new rider, winning the American Jumping Derby and a Grand Prix in Toronto in 1977.

From then on, he went from strength to strength, winning the American Gold Cup and both team and individual Gold Medals in the 1979 Pan American Games in Puerto Rico, along with a second American Gold Cup, the Grand Prix of New York and Washington’s President’s Cup in 1980. In 1981 the pair topped the world’s best jumpers at the World Cup Final in Birmingham, England and also earned the AGA Horse of the Year title.

Matz rode Jet Run for the U.S. in the 1982 World Championship and for four years on the fall circuit. After finishing the Florida Circuit in 1985 Jet Run was retired to the Dixons’ farm in Pennsylvania. At the time of his retirement, Jet Run was second to Calypso in career winnings on the AGA circuit and third behind Idle Dice and Calypso with 14 Grand Prix wins.

All images courtesy of the Show Jumping Hall of Fame.