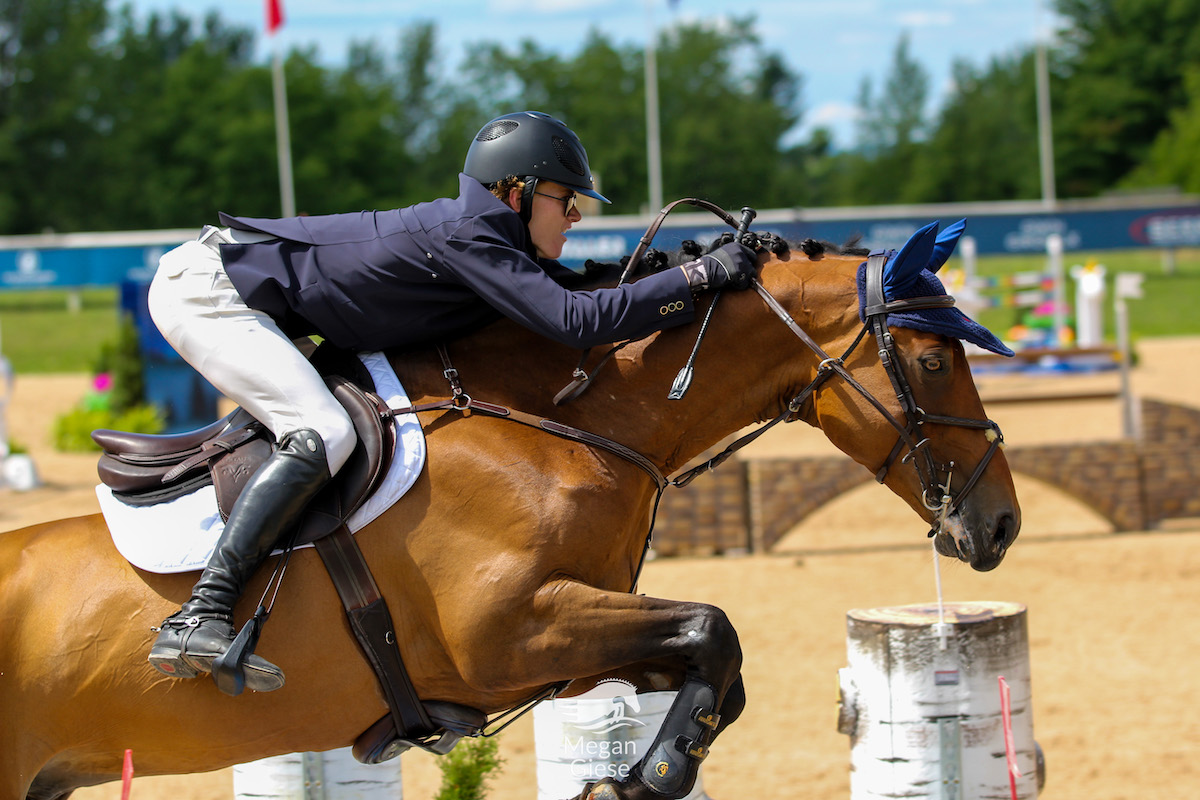 Then all his plans went immediately out the window.

“So my two High [Junior] horses, Alegria Z and Ricore Courcelle, were on the trailer from Tryon [International Equestrian Center] to come up here. They got [off the trailer] and I flatted them and they’re both lame,” shared Martin.

The horses were diagnosed with hoof abscesses believed to be related to recent shoeings in Tryon, NC and the climate change travelling to Traverse City, MI.

“The most important thing, of course, is the horse has to be happy. So next thing you know, I have no horse for [NAYC] and I was really bummed,” he continued.

“My dreams of competing [in the Junior division] kind of went out the window.”

For the next week, the Vineland, ON native and his grooms worked to flush out the abscesses. Despite daily visits from the vet and four hoof soakings per day, his best horse, Alegria, wasn’t fit to compete at NAYC.

But Ricore started to turn the corner.

“Only he would come around last minute,” smiled Martin. “He’s a really, really tough horse.”

Two days before the jog, the 17-year-old Selle Francais gelding was deemed sound to ride. But after a week of stall rest he wasn’t easy to ride.

“He just kept bucking 20 minutes straight,” said Martin of that first ride back. “I couldn’t get any flat work in.”

More importantly though, the horse felt good. Two days later, they jogged at the first horse inspection for NACY and Ricore passed. “He was happy, healthy and ready to go.”

After that harrowing week just to get to the championship, Martin was grateful simply to be able to compete and set his expectations for low.

“I was like, Alright, let’s just be thankful to be in the ring this week. Let’s not try to try to win anything here,” he said.

On Thursday, the opening speed class, his goal was a solid score for the team.

“I just had a nice, steady, slow, clear. And he didn’t touch anything,” said Martin. His time was a conservative 70.25 seconds compared to the winning time of 62.46. It was good enough for 10th place.

Come the first round of team competition, the pair repeated their clear jumping ways. Again, Martin set his expectations low for the second round. “I thought, okay, four faults, that should make the chef happy. Let’s just go and put a nice useable round in.”

Ricore, however, had other plans. The gelding posted one of only three double clears on the day.

Alas, it wasn’t to be for Team Canada. Teammates Olivia Blaber and Mauna Lani posted an impressive 4/0, but a 12 and 4 fault performance by Quintyn Werner Baeumler and Haydn and a 46 and 32 by Ava Wong and Damman O.L. ultimately put the team in sixth.

“I was kind of bummed out because the team didn’t have the best day,” said Martin.

“I was sitting at the table and someone comes up to me and said, “You’re leading this.” I laughed in their face. I didn’t think they were serious at all, then I looked at the standings and I’m like, holy, I’m actually leading this!”

Elation was soon replaced by trepidation.

“Ever since that moment, I wish I didn’t know because I’ve been stressing out the last two days. I’ve barely been able to eat anything. I haven’t slept at all,” shared Martin.

Sunday, the morning of the individual final, the pressure only grew worse.

“I rode Ricore in the morning. He felt good, then I came down to the ring. I was shaking. I’m still shaking,” said the Canadian.

And the clear rounds kept on coming.

In the first round of the individual final Martin and Ricore left all the poles in place but caught two time faults to put them on a score of 5.70. Returning second to last in the medal-deciding jump off, the pair executed a foot perfect round to put the pressure on class leader, Della White and Giggs, winners of Thursday’s opening a speed round. When the pair caught a rail, the win was handed to a disbelieving Martin.

“What’s really nice with Will is he’s very good to ride to instruction,” said trainer and Irish team member Andrew Bourns. “I can give him the tools but if a rider can’t go in there and deliver, they’re not going to have the same success whereas with Will I can give him detailed instructions on how to ride the track and he’s able to deliver. At the end of the day, I think that’s what makes him so good.”

Making the win all the more impressive, the pair has only been together for three months. Ricore was previously campaigned by Teddy Vlock (ISR) up to the 1.60m level and briefly, over the winter of 2022, by Francis Derwin (IRL). Bourns made the match, but it was a hot minute before Martin believed in it.

“The first time I sat on him, I hated him. I flatting him I was like, this is a dog of a horse,” he laughed.

“Then I jumped my first jump with him and I was, Oh my God. The scope this horse has is unbelievable. We carried on with the trial and I really liked him, his attitude.”

While the reality of capturing the biggest win of his career hasn’t sunk in yet for Martin, the gratitude has.

“I owe my horse a ton of credit and my team credit,” said the newly crowned Junior gold medalist.

“I really think it’s only those [difficult] moments that just make you appreciate every day so much more, so grateful for that.”