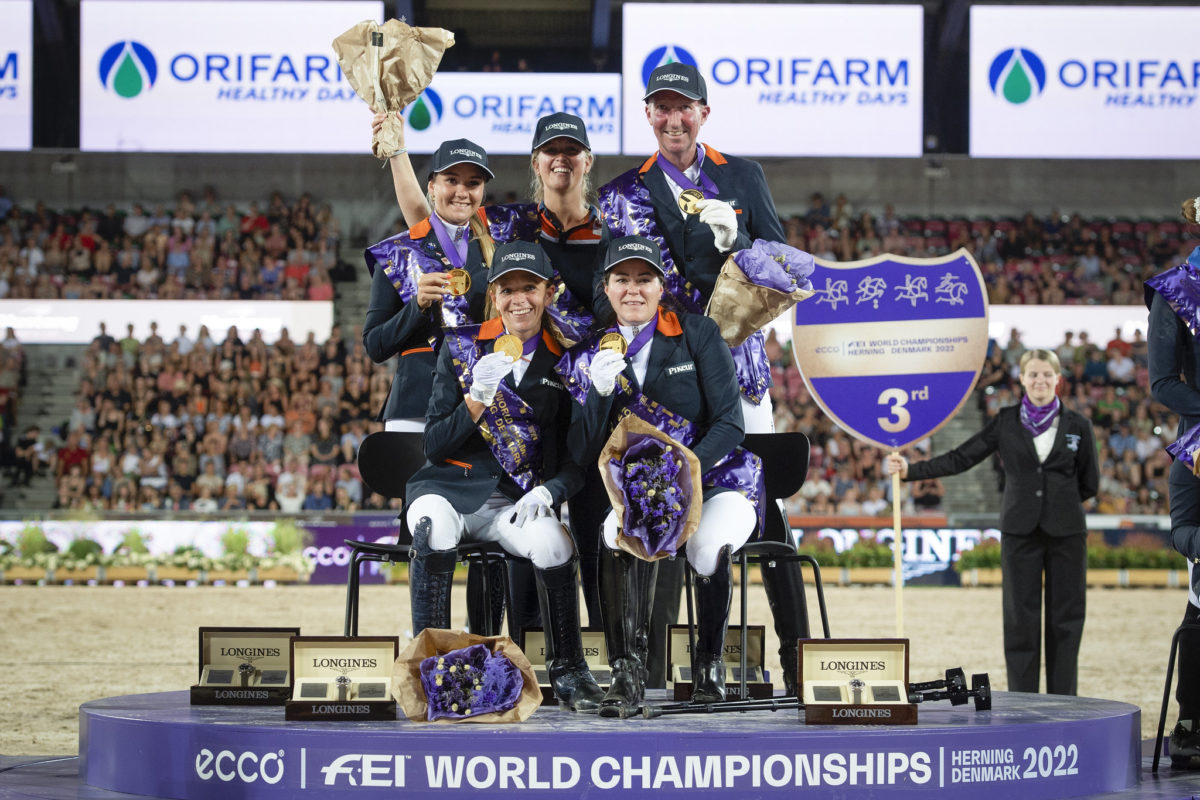 Grades classify athletes in accordance to their disability to promote an equal playing field. In the team competition, each Grade competes separately and performs their classification’s respective test. The best three scores from each team are combined, and the team with the highest total score secures the gold medal.

So, think of the strategy as divide and conquer.

This week in Herning, Denmark, 18 nations came forward, competing over two rounds to determine the 2022 Para Dressage Team Champions. Herning is also a qualifier for the Paris 2024 Paralympic Games, offering spots to the top seven teams.

The Netherlands was the first team to snag a golden ticket.

The Dutch were the defending champions, having previously won the title at Tryon in 2018. Sanne Voets [Grade IV], Demi Haerkens [Grade IV], Lotte Krijnsen [Grade III] and Frank Hosmar [Grade V] collected a total score of 230.225%. Denmark, who had the individual test winner Tobias Thorning Joergensen (79.265) finished close behind with 229.751%. The United States rounded out the top three with 225.335% to take bronze.

While the athletes themselves were thrilled, there was one person whose elation sounded waves above the rest.

“I have never screamed so loud in my whole life,” laughed, Joyce van-Rooijen-Heuitink, Dutch team trainer and coach.

“They must have heard back in the stables that it was me. I just cannot describe it, I’m on cloud 26. We have two new riders and you never know what they do at a championships. I knew Sanne [Voets] and Frank [Hosmar] would deliver but the other two did as well. How cool is that?”

Voets is a seasoned team rider, having been part of the last World Championship team and captured individual gold at the 2020 Tokyo Paralympics aboard 14-year-old gelding Demantur RS2 N.O.P, the same horse she campaigned for the team competition in Herning. She is currently the world number two.

Hosmar has also medaled at several World Championships and Paralympic Games with 17-year-old gelding Alphaville N.o.p., including individual bronze in London 2012 and Rio de Janeiro 2016. In Tokyo, Hosmar was just behind Voets donning a silver individual medal. He was part of the winning Dutch World Championship team in Tryon.

“It was really fun. At some points I thought ‘a little bit more,’ but then I thought ‘no, no, I don’t want any mistakes,” said Hosmar.

Haerkens and Krijnsen might not have all the same accolades yet, but they’ve now won their first World Championship. So, not a bad start.

The USA isn’t on cloud 26. They are, however, on cloud nine.

The team didn’t arrive in Herning with a goal for gold this time, their priorities were on securing a spot to Paris.

“We came with a very different team of horses than the one we took to Tokyo and our expectation was not for a medal, it was to qualify for Paris and then have a building year. But this shows our program is going in the right direction. To be bronze with this young team is an amazing feeling. There’s something about when you strive for something that is just out of reach and then you grab it and hold tight.”

Expect to see the Netherlands, Denmark, the USA, Great Britain, Belgium, Germany, and Italy in 2024 dancing in Paris. But it’s not over yet. The Orifarm Healthcare FEI World Para Dressage Individual Championship will conclude Sunday.