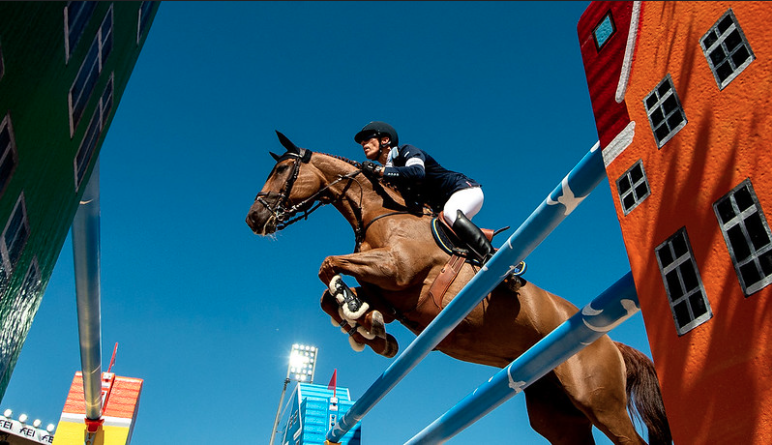 That’s not exactly how Sweden’s Jens Fredricson acquired the ride on 11-year-old gelding Markan Cosmopolit, but you could call it the abridged version.

While Markan Cosmopolit was busy being a baby, the cafe owners of the Swedish National Training Centre in Stromsholm decided to buy the charming three-year-old as a prospect for the riding school. Yet, their aspirations for the horse were rather grounded, considering he had yet to demonstrate any particularly exceptional talents.

What did become clear quite quickly is that he was too hot for their schooling horse program. So, Fredricson had to take over the ride.

Still, the Swede might have been surprised to hear that eight-years later he would be campaigning Markan Cosmopolit in the Agria FEI World Championships 2022 in Herning, Denmark. Successfully, at that.

“Nobody thought he was special but the cafe owners wanted to buy a horse for me, and because he was too sensitive to use in the school I said I’d ride him and maybe we’d sell him later on. To my big surprise he turned out to be a superstar,” said Fredricson.

In a recent show of his star quality, Markan Cosmopolit achieved the individual bronze medal at the FEI World Cup Finals™ Leipzig this past April.

Fredricson and Markan Cosmopolit are part of the leading team.

Sweden remains steadfast in pole position going into Friday’s deciding medal round. Evidence suggests they’ll ride the wave all the way to team gold, but Chef d’Equipe Henrik Ankarcrona (SWE) knows that outcome is hanging in a delicate balance.

“[They want it] so bad that it hurts. But we all know it can fall apart in a split second with a fence down,” said Ankarcrona.

By the numbers they have a good chance of finishing on the score they need to clinch it. Current world number three Peder Fredricson is aboard H&M All In. The 16-year-old gelding has a 66% clear round rate at 1.60m according to JUMPR App. Reigning world number one, Henrik Von Eckermann (SWE) rides 12-year-old King Edward, who sports a 63% clear round rate at the same height.

Currently Malin Baryard-Johnsson (SWE) and 14-year-old H&M Indiana is serving as the team’s drop score after they captured a rail and landed a foot in the water in Wednesday’s Team & Individual Jumping Championship – Speed.

It is a special Championship for Jens and Peder Fredricson.

Jens and Peder are in fact brothers, and despite both enjoying long and prosperous careers this is the first time they have competed on a Championship team together.

The top ten teams will advance to Friday’s final. So while a Swedish win would be serendipitous, France, Germany, The Netherlands, Belgium, Great Britain, Switzerland, Canada, Ireland and Brazil will also bring their fighting spirits. Defending champions Team USA did not make the top ten.

The individual standings are also at a stalemate.

However, Herning marked Epaillard’s first 5* Individual win with the mare, and he had no plans to relinquish his bragging rights overnight.

Epaillard’s 0/0 score puts him just ahead of Scott Brash (GBR) with 13-year-old Hello Jefferson, followed by Peder Fredricson (SWE) with H&M All In. If he will be able to hold them off in Friday’s medal, only time will tell.

Though some things have changed.

The top spots haven’t shifted, but there has been a shake-up in the team standings.

Current world number two rider Martin Fuchs (SUI) secured third position with Leone Jei after the preliminary round. The 10-year-old gelding was favored for a medal after jumping to the win with the team at the CSIO5* Nations Cup in St. Gallen in June, and then besting the CSI5* Rolex Grand Prix Ville de Dinard in July.

Fuchs expressed concern of Leone’s tendency to take a rail when he’s too fresh, so he kept the grey gelding busy with shows leading up to Herning. They ultimately did collect a rail on course Thursday, which sent them from third place all the way down to 15th.

Jos Verlooy’s (BEL) 14-year-old gelding Igor stopped at the triple combination, sending Verlooy out of the tack. The Belgian team fell from third place to fifth, but the solid rounds of Nicola Philippaerts, Jérôme Guery and Gregory Wathelet kept them from dropping further.