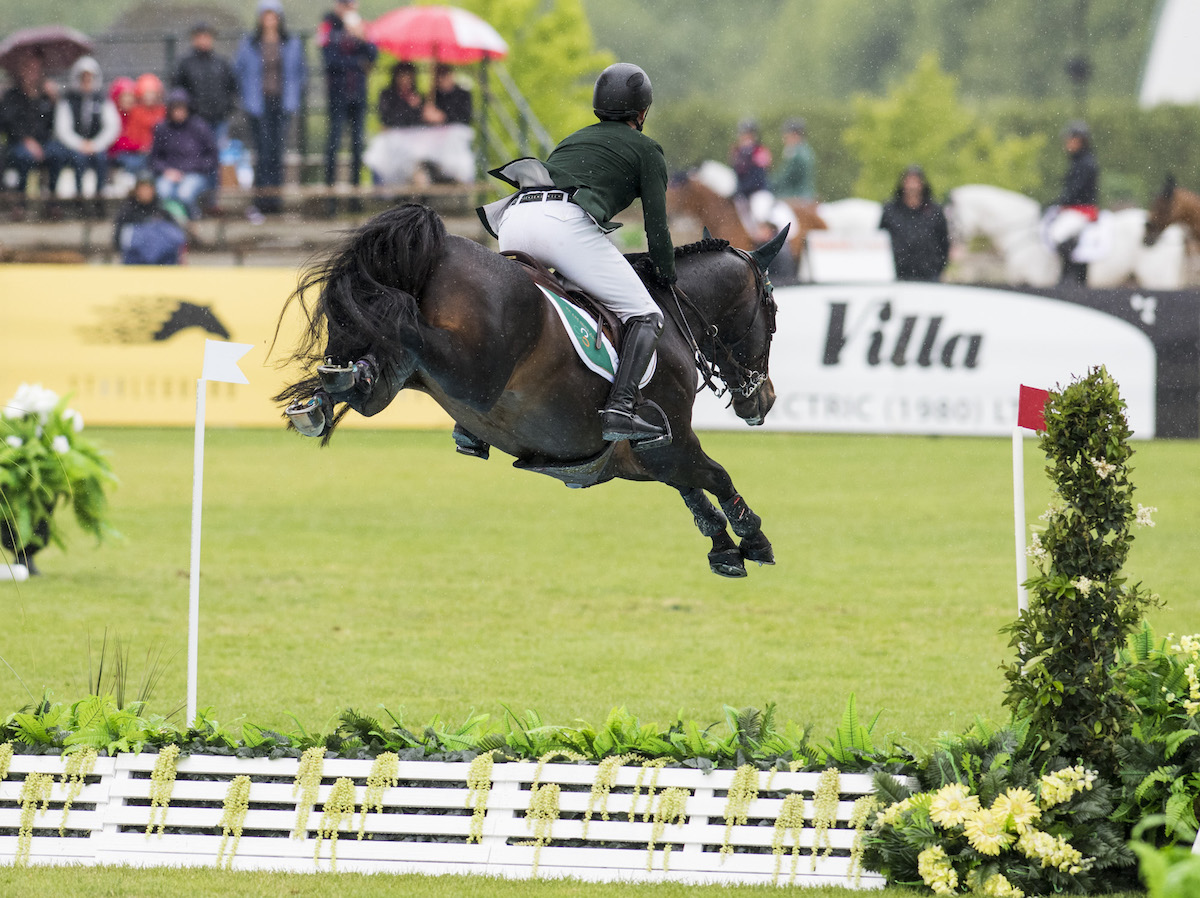 It’s a uniting of nations in Vancouver this week, except not quite.

Six countries will fight to the finish over two fierce rounds for the illustrious CSIO5* Longines FEI Jumping Nations Cup of Canada™ at Thunderbird Show Park.

The United States, Canada, Mexico, Ireland, Israel and Australia will all be fielding teams on Sunday in pursuit of the $400,000 purse and 5* distinction. Additionally, tbird is the site of the second and final leg of the North and Central America & Caribbean division. This means there is even more riding on the horses for USA, Canada and Mexico, who are also seeking qualifying points for the Nations Cup Final in Barcelona.

The top two nations in the division will advance to the Final. As it stands it will be Canada and Mexico’s bid. Team USA’s campaign has fallen out of reach after their team faced an unfortunate elimination in the first leg in Coapexpan, Mexico. They go into the Fort Grand Prix arena with zero points on the leaderboard.

Canada and Mexico are currently neck in’ neck. Mexico collected 100 points for their hometown win in Coapexpan, while Canada was awarded 90 points for second. The USA could only swipe one of their spots in the Final if they won this weekend at tbird and either Mexico or Canada were eliminated. So unlikely.

Ireland, Israel and Australia might not be collecting division points, but they’re no less motivated to wave their flags atop the podium. So who’s the top contender going into Sunday?

Let’s break down why the Nations Cup of Canada will be the tightest race tbird has ever seen.

Canada is the underdog no more

Coming off a string of top results in Wellington and La Baule, Canada presents perhaps one of the field’s strongest teams. Helmed by chef d’équipe Eric Lamaze, Canada will tap in team veterans Tiffany Foster, Beth Underhill and Mario Deslauriers. Foster and Underhill caught a flight to Canada from Italy after placing fifth with the team last week in the CSIO5* Nations Cup of Rome. Underhill finished on a score of 0/1 faults with Torrey Pine’s Dieu Merci Van T & L, while Foster and Figor galloped around the Piazza di Sienna in 0/4.

Included in the lineup are rising stars Jacqueline Steffens and Ali Ramsey. Steffens was a member of the second place team in Coapexpan and is also an Eye Candy rider on the Major League Show Jumping (MLSJ) tour; placing fourth in the Team Competition at MLSJ Vancouver this past weekend.

Team USA’s Chef d’équipe Robert Ridland opted for a green team in Coapexpan, a valuable investment in developing rising riders, but unyielding in terms of results. This week, there is no shortage of experience.

They start in with their weapon, world number seven Kent Farrington. Last weekend at MLSJ Vancouver, Farrington finished ninth in the CSI5* Grand Prix 1.55m, and we can be assured his hawk’s eye is on a tbird title. Karl Cook and Bliss Heers are also teammates on the MLSJ tour, competing for the Helios who won the MLSJ Team Competition last weekend.

Hunter Holloway is no stranger to the top level, and is riding the momentum of her impressive eighth place finish at the World Cup Final in Leipzig, Germany. This will be Holloway’s senior Nations Cup debut. Ailish Cunniffe also starts in as a rookie. Cunniffe was part of the Coapexpan team, where she put in a clear round.

Israel is short a rider but tall on talent

They’re the only nation on the roster with a three person team, but do you need a drop score with a grand slam of riders? Ashlee Bond, Daniel Bluman and Alberto Michan will represent Israel.

Michan is decorated with FEI World Cup and World Equestrian Games appearances, also placing fifth individually in the 2014 London Olympic Games. Bond has been on a 5* winning streak, capturing the CSI5* Rolex Grand Prix with Karoline of Ballmore this past April, and placing first with the Helios last week during the MLSJ CSI5* Team Competition. Bluman is currently ranked 14th in the world, making him one of the most competitive on the start list. He also just made his acquaintance with Queen Elizabeth, placing third in the CSI5* Grand Prix at Royal Windsor Horse Show with Ladriano Z.

Mexico on a mission

Mexico won the Nations Cup at tbird in 2016. It’s been a five year drought since. Back with a new chef in Mark Laskin, former chef of the Canadian team, they’ve brought their A team this week. Tokyo Games Olympian Eugenio Garza will ride for Mexico, winner of last week’s MLSJ CSI5* Team Competition with the Helios.

Team staples Patricio Pasquel, Manuel Gonzalez Dufrane and Nicolas Pizarro join in after winning the Nations Cup in Coapexpan in March. Pasquel also clinched a recent CSI5* win in Mexico City, while Gonzalez Dufrane won two CSI4*-W classes in Puebla. Among them is Jose Antonio Chedraui who is new to the 5* level.

Ireland is in it to win it

You don’t need the luck of the Irish when you have the stats.

Conor Swail leads as current world number five with two of the top three horses in the world standing in his stable. He’s joined by Shane Sweetnam, number 29 in the world, his strength in his consistency.

Andrew Bourns has been steadily climbing the rankings with 5* results atop gelding Sea Topblue. Bourns also won a CSI4* 1.60m class in Wellington in January. All the Irishmen on the same team is a dangerous game.

Australia is the underdog with bite

Last but certainly fast is the Australian team, which is making its first ever Nations Cup appearance at tbird this Sunday. Olympian Katie Laurie hasn’t shown any international classes since the Winter Equestrian Festival, so she arrived in Langley fresh and hungry. In March, Laurie placed sixth with the Australian team in the CSIO5* Nations Cup in Wellington with James Arkins, who was making his team debut. Artkins is in as good a form as any after placing second in today’s CSIO5* Happy Welcome.