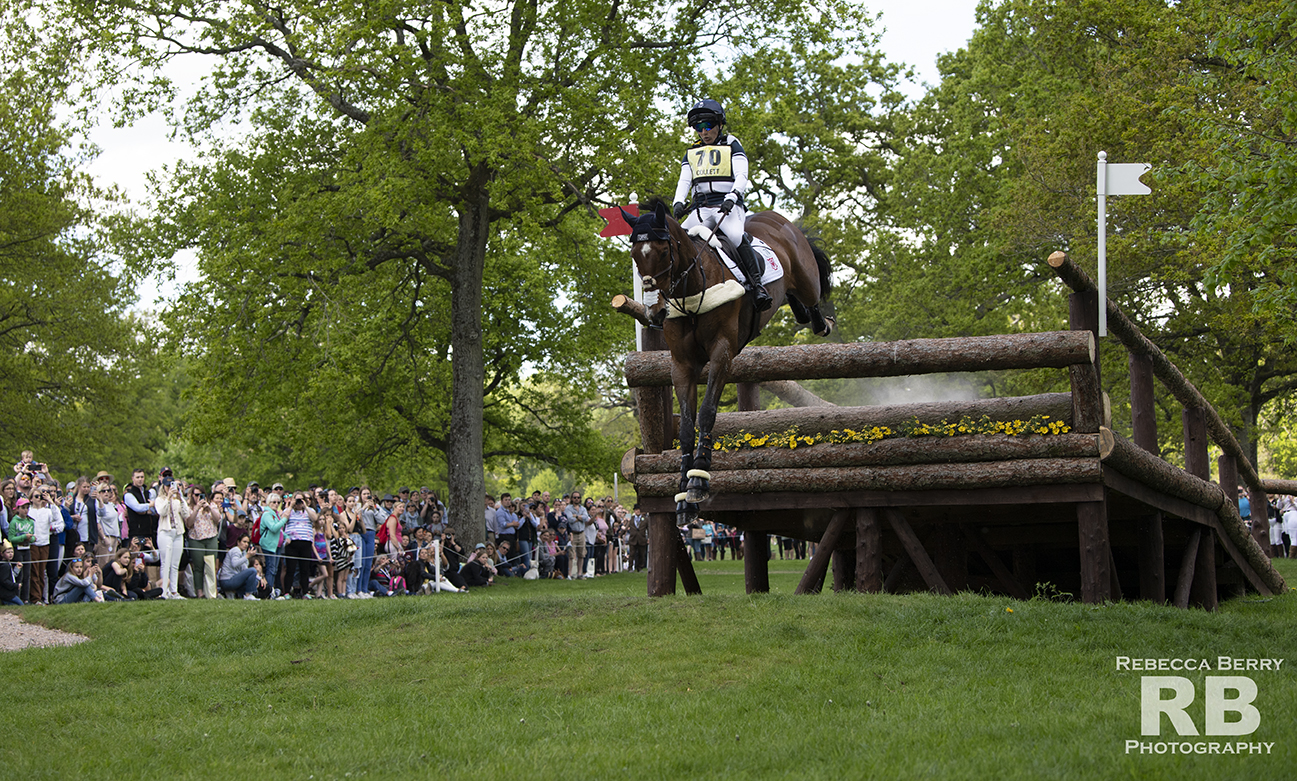 The Brits hold on to the top three spots after a tough cross-country day at the Badminton Horse Trials, but not the same three as yesterday.

Cross-country day is often called Moving Day because of the way the cross country trials have an uncanny ability to shake up the standings. While Laura Collett and London 52 retained their lead, the other two spots did a quick-change.

Collett had a fast confident ride with London 52, finishing the day on their dressage score leaving her with a rail in hand going into tomorrow’s show jumping.

“I tried to enjoy my round. It was hard work, but he was phenomenal,” Collett said of London 52.

“We missed Badminton and we missed the crowds. It is amazing to be back.”

Britain missed Badminton, that’s for sure. For the first time in two years the the Badminton Estate in South Gloucestershire opened their gates, and over 100,000 people, most of whom brought their dogs, clamored in. Amazingly, I don’t believe even one pup got loose.

Oliver Townend and Swallow Springs moved from sixth place up to second after a quick clean round. If that isn’t a good enough way to end his day, Townend’s second ride, Ballaghmore Class, has moved into third place.

“It is very very special to be back at Badminton. To ride around a course that Eric Winter has designed, in my opinion, fantastically, it felt like a 5* should feel. You had to work hard, you had to get stuck in,” said Townend.

Rosalind Canter and her 10-year-old Lordships Graffalo moved from tenth to fourth and on her second horse Allstar B, moved from twelfth to sixth. The Americans moved around the scoreboard a fair amount, Tamra Smith and Mai Baum had an accurate but slightly slow ride dropping her to fifteenth.

Philip Dutton and Z had a bit of a hairy moment at the Vicarage Vee but moved up 14 places to 25th position. Ariel Grald and Leamore Master moved up 30 places and now sit in 24th, and Emily Hamel and Corvette moved up 19 positions. Mike Winter (CAN) and El Mundo moved from 51st to 57th place.
Matthew Flynn (USA) with Wizzerd and Karl Slezak aboard Fernhill Wishes (CAN) retired on cross-country along with five others. Lillian Heard and LCC Barnaby was eliminated along with 12 others.

It will be another sunny day tomorrow with a lot of exciting show jumping ahead. Laura Collett
has a rail in hand with Oliver Townend hot on her heels with his two grey Irish Sport Horses.