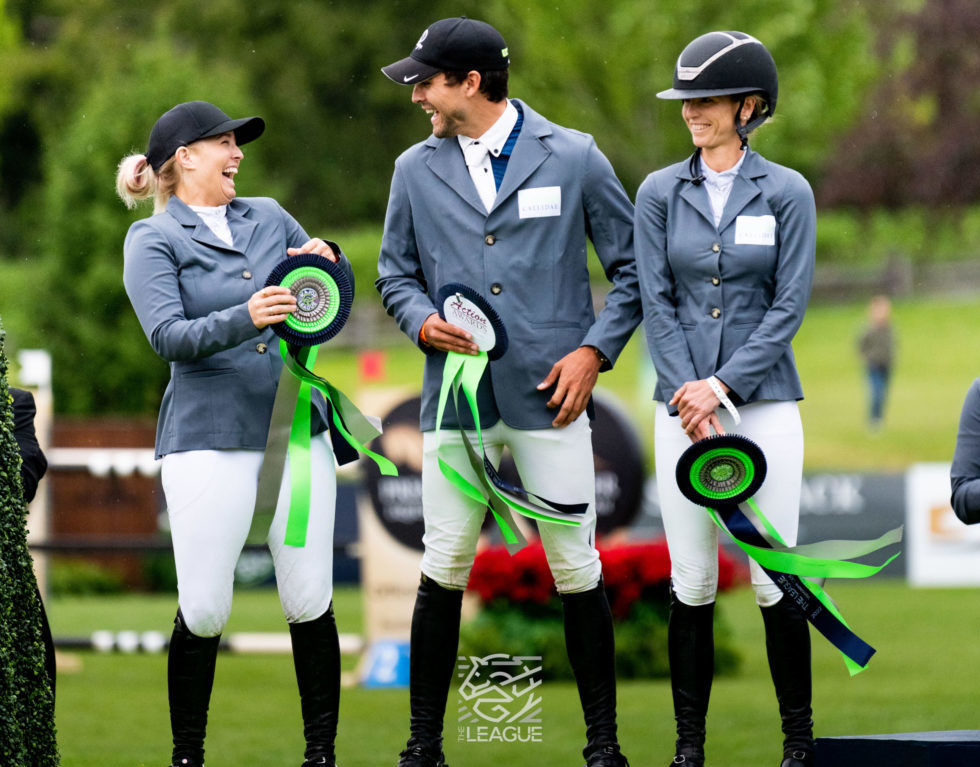 The stage for Major League Show Jumping (MLSJ) Vancouver was set on Saturday. Eight teams battled for victory in the Fort Grand Prix Arena at Thunderbird Show Park (tbird), the first stop on the 2022 Tour.

And it took no time to delve into the excitement of the new season.

The $200,000 CSI5* Team Competition saw a dramatic win from Team Helios. Facing off against the Spy Coast Spies in the gold medal match, the team was initially slated in second place. But it’s not over until the FEI Steward sings.

Unique to MLSJ, the team competition sees eight MLSJ teams compete over three rounds. In Round One, each team fields three riders back to back. The goal: stay above the cut line. The four teams with the lowest total scores advance to the second round, where they field two riders apiece in a faults-converted speed course, meaning any rail down will add three seconds to the clock. The two quickest teams advance to the gold medal match, and the slower two, to the bronze medal match for head to head jump offs to decide the podium.

At MLSJ Vancouver, Helios’s Bliss Heers faced off Spy Coast Spies’ Jordan Coyle in the gold medal match. Heers collected a pair of rails on the Peter Grant designed jump-off track, adding six seconds to the clock for an final time of 58.77. Coyle, riding Picador, the same horse that he captured the win with in leg one of the 2021 MLSJ tour, also had a rail but crossed the timers in a quicker time. It seemed they were gearing to repeat history.

But in the post-round horse inspection the steward discovered a small nick on 15-year-old Picador’s flank. Coyle was eliminated in accordance to the FEI “Blood Rule.”

“The FEI has rules in place to protect the welfare of the horse,” explained Keean White, co-founder of MLSJ. “The decision was made with a lot of thought, and they took their time on it. It’s unfortunate, knowing Jordan he had no ill will whatsoever. He’s a great horseman.

“The horses always come first and we all play on a level playing field. We all know that’s the rule and when it happens, it happens. It doesn’t happen often.”

With Coyle’s jump-off score dropped, the title was handed to Helios. The team was represented by Heers, Eugenio Garza Perez and Ashlee Bond, fighters in their own right.

“Bliss and I have known each other for a long time in California, she’s a fighter. She’s fast and has a great horse,” said team manager Bond. “Karl’s here cheering us on. I think we just found the strongest people with the best horses and hoped for the best. All of our personalities really vibe great together.

One thing they do take seriously: winning. Helios was the loudest team in kiss n’ cry, climbing and nearly toppling over the railing to cheer Heers home in the gold medal jump-off.

Strategy is the game in the MLSJ Team Competition. Taking place over three rounds, priority one is to make the cut for round two and priority two, to qualify for the gold medal matchup, which will ensure a first or second place on the podium. For Helios, that meant fielding their strongest riders in round two.

This leg, those were Garza and Bond, who posted a clear and 4, respectively, in the first round and a combined time of 108.18 in the second round. That left Heers, who collected 12 faults in round one, the hefty responsibility of securing the win in round three, where she picked up two more rails with the 11-year-old KWPN mare Goodbye. It was an atypical performance for the pair. Goodbye has a 48% clear round rate and average faults of 2.21 at the 1.45m level, according to JUMPR App.

“Today was very special for me in particular,” said Heers. “This is the essence of the team competitions, where one falls short, the others come back and they carry the weak link. Today, I was that weak link. But you know, we’re all fighters and we all want to do our best and here we are. Team spirit put us on top.”

Bond and Garza competed together last year under the team A.I.M United. The name might have changed, but the heart of the team competition stays the same.

“We as riders, have been looking forward to this class the whole week because we know how fun, intriguing and different it is,” said Garza. “To cap it off with a win is pretty good.”

“Especially when you have a team like this, it makes it so much better.”

Their camaraderie is second only to their competitiveness and MLSJ Vancouver isn’t over yet. On Sunday, even the closest of teammates will have to battle it out for the $214,300 CSI5* Grand Prix 1.55m.