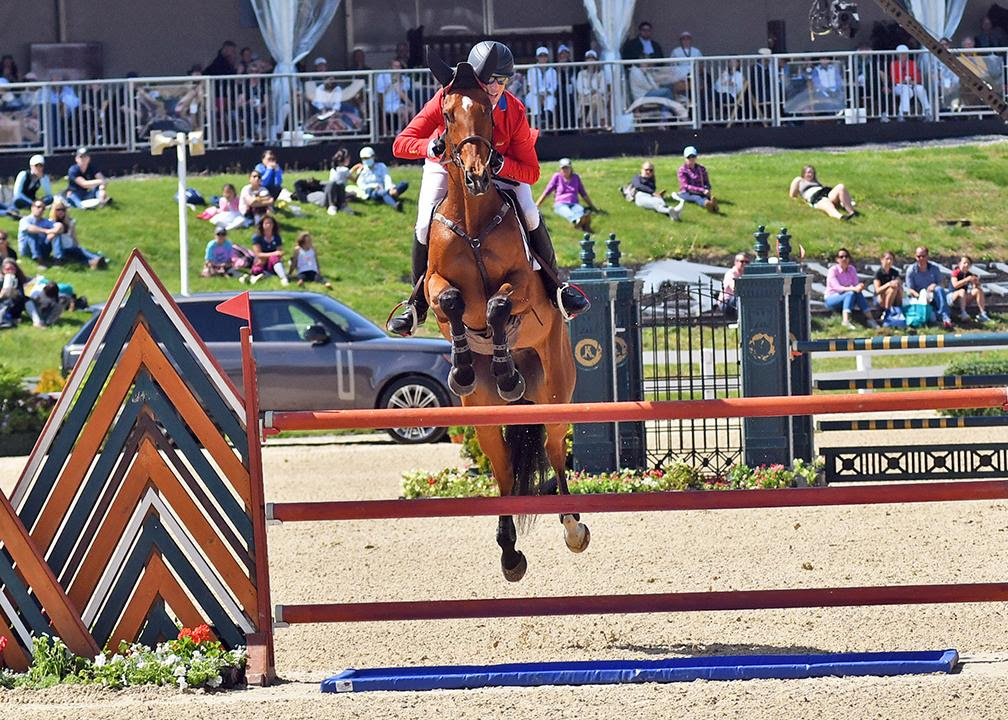 “This has been a very tough day, actually,” said Doug Payne.

Sunday at the Land Rover Kentucky Three Day Event in Lexington was the end of an era and the start of another for the American rider.

Payne was crowned U.S. National Champion with Quantum Leap after making a quantum leap up the leaderboard in the CCI5*-L competition. The pair were in 25th after Friday’s dressage phase on a score of 37.2. They added just 1.2 time penalties on cross country Saturday to jump into fifth overall. A double clear on Sunday put them on the podium behind five star legend Michael Jung (GER) and fisherChipmunk FRH and five star debutante Yasmin Ingham (GBR) and Banzi du Loir.

The third place finish was a career best for Quantum Leap, an 11-year old Rheinland bay gelding developed to the CCI5* level by Payne.

“We bought him as a weanling from Deedee Callahan,” shared the world No. 16 ranked rider. “And so to get here, he certainly blew my expectations away. I mean, he just continues to get better and better. And as an 11 year old, this is his third five star now, I couldn’t ask for much more.”

The same day Payne celebrated his National title victory also marked his final 5* appearance with Tokyo Games mount, Vandiver. Payne announced the day prior that he’d be retiring his partner of six 5* events after the LRK3DE.

Alas, the pair would not top their 2019 fifth place finish in Kentucky. Payne and the 18-year-old Trakehner gelding were in 11th after dressage, but added an uncharacteristic 20 jumping penalties at the C element of the coffin at fence seven and 17.2 time penalties on cross country, falling to 27th overall. Eight additional penalties collected on show jumping put them on 80.1 total and into 24th to finish.

“It’s been a tough day. It’s going to sink in in a few days,” said Payne, referring to Vandiver’s retirement. “It’s a lifetime of work, obviously. And you’re driven at the same time to continue to improve and just to get better. But to have [another horse], especially with Vandiver retiring after this week, to have another horse stepping into his shoes, frankly, I think the future is incredibly bright. So I’d like to think that’s a starting point rather than an ending point.”

Payne is a “multi-sport” athlete who competes in eventing, dressage and show jumping at the FEI level. In addition to Quantum Leap he has an upcoming mount in Starr Witness, a horse he competed in the CCI4* competition this week.

“My personal goals have been to [be competitive] in all the sports, I have a silver medal with USDF, I want a gold and a Grand Prix horse and [Starr Witness] will absolutely do it. Competing across disciplines is always my ultimate goal, to be able to show up in any sport and be competitive, and she can make it happen.”