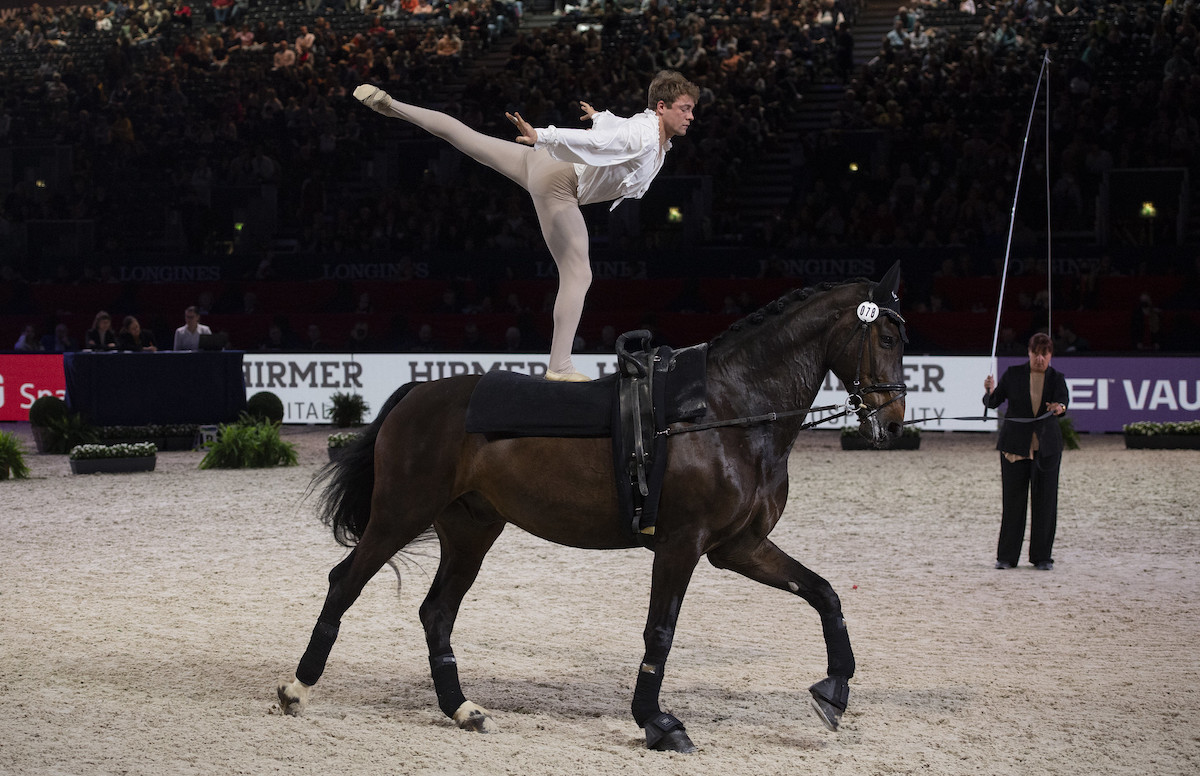 Perfect 10s, a champion making debut, and the final performance of a career, the 10th edition of the FEI Vaulting World Cup™ Final in Leipzig, Germany brought drama and artistry in spades.

But before we get to the results, there are a few things you need to know about “gymnastics on horseback”…

Vaulting is unique among the international equestrian sports in that it’s the only one in where no one doubts the athleticism of the human competitors and where the equine ones are often shared between competitors of different nations. It’s also the only FEI sport where men and women compete separately.

Athletes are scored on balance, strength, fluidity, flexibility, smooth transitions, musicality, and a steady dismount, as well as degree of difficulty. Moves between the mandatory elements help vaulters add to their artistic and technical scores. The horse is also scored, so the good longueur and steady canter are vital.

For individual competitors, Day 1 is a technical test and requires five specific exercises, such as a cartwheel, backward stand split, and lower armstand, which the athletes can work into a musical program of their choosing. The free test on Day 2 is an opportunity to display more artistry and includes many of the elements from the technical test but with a theme that combines movement, music, and costuming to create one impression.

The Pas de Deux is a pairs competition made up of two free tests.

Now, back to Leipzig.

France’s Manon Moutinho made her Vaulting World Cup Final debut in Leipzig and is leaving a champion. Currently ranked No. 3 in the world, the 25-year old competed with Saitiri, the only mare in the female division and the only horse to score above an eight. Saitiri earned a 8.340 in Friday’s Technical Test and was longed by Corrine Bosshard.

“It’s the first time my mare sees an arena like this. This was a big arena for her, and the crowd feels really close. When we came in, the lunger kept her close, and I trust her because I knew this was strategic, but as soon as she said ok—then I just went into performance mode,” said Manon, after Friday’s performance.

Their dynamic and technical performances featured a backflip on top of the horse “done to perfection.” Saturday’s contemporary dance theme showcased strength and smooth transitions to earn a score of 8.624, giving Manon an overall score of 8.430 and the World Cup championship title.

Three-time World and European champion vaulter Janika Derks of Germany, vaulting on top of Rockemotion longed by Nina Vorberg, settled for silver in the Individual Female competition with a combined score 8.257. USA’s Kimberly Palmer (USA) took bronze with a 8.009 combined score, competing on a borrowed horse.

Lupacchini lays it all on the line

Top honors in the Male division and the award for Most Italian Name Ever went to Lorenzo Lupacchini (insert Italian hand emoji) aboard Rosenstolz 99 longed by Laura Carnabuci.

The 2018 World Equestrian Games Pas-de-Deux champions performed to Elton John’s “Rocket Man” on Friday to earn a score of 8.489, finishing behind France’s Lambert Leclezio. “Rosen,” a horse once described as “difficult” to perform with, posted the best horse score on Friday (8.220).

Italian vaulters are known for originality and Lupacchini delivered precisely that with an expressive and balletic performance on Saturday to earn a score of 9.101, the only 9 of the vaulting finals.

“I am really, really happy, because I didn’t expect this result,” said Lupacchini. “I just participated for enjoyment. I was in second place [after Friday’s Technical Test], so I had nothing to lose and nothing to win. So I tried to give emotions and not only exercise. I tried to relax and just feel the horse.”

The 26-year-old self-proclaimed cat lover is currently ranked seventh in the world.

Leclezio and Saitiri lunged by Corinne Bosshard were relegated to silver on 8.690 combined score after an unfortunate fall in Saturday’s free test. Jannik Heiland (GER) took the bronze with 8.019 on Rockemotion lunged by Nina Vorberg.

The end of an era

Making their first World Cup Final appearance together and the final one of their Pas de Deux career, World Champions Janika Derks and Johannes Kay (GER) were the favorites heading into Leipzig and they didn’t disappoint. The pair ended a championship studded career with an exclamation point, scoring a perfect 10 for artistry over both rounds to lead from start to finish.

Competing with Humphrey Bogart OLD and longueur Nina Vorberg, Derks and Kay expertly executed a difficult free test to score 8.754 on Friday and 8.918 on Saturday for a combined score of 8.836—finishing nearly an entire point ahead runners ups Eva Nagiller and Ramona Hintnerm, the all-female pair from Austria (8.016).

“I think we have achieved exactly what we wanted to achieve here again,” said Derks, “having fun with the sport, just enjoying it—this was just the perfect show for both of us to find closure.”

Kay echoed her sentiments, adding: “Of course, we are both perfectionists. Thoughts linger in a few places, but the joy prevails. To have found such a beautiful conclusion, in such a beautiful atmosphere—it doesn’t get any better than that!”

The bronze medal went to Germany’s Chiara Congia and Justin van Gerven with a combined score of 7.577.

The World Cup Finals continue with the medal deciding Dressage Freestyle on Saturday and the Driving and Jumping Finals on Sunday, all streaming on FEI TV.