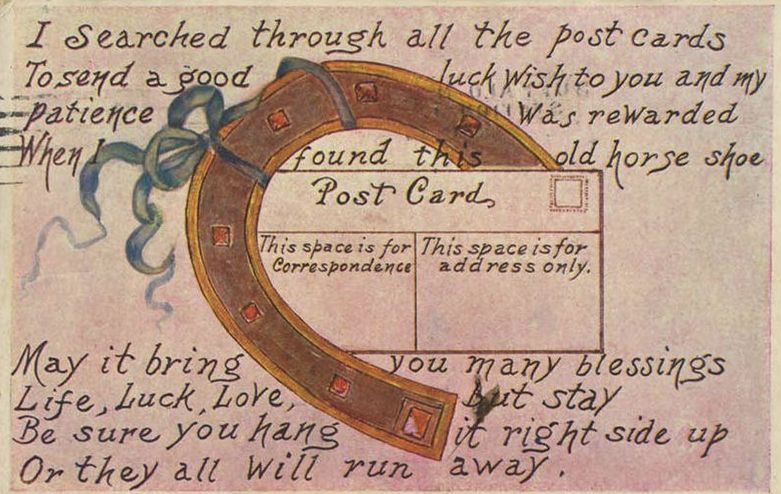 We horse folk have the good fortune to be surrounded by horseshoes.

The expensive variety we buy our horses every four to eight weeks. We know they are lucky because that is what we’ve been told, though I doubt anyone feels that way when they get the farrier bill.

So, as is the #horsewordnerd way, I’ve decided to get to the bottom of this lucky horseshoe business once and for all.

I was hoping to find multiple sources that said, “Horseshoes are lucky because the Irish said so,” and from there this post would be complete. But I should know by now that is never the case. The ever-present rabbit hole of information is always waiting for me, sucking the hours from the day.

Alas, I forge ahead.

In this case with the help of a book written in 1899 called The Magic of the Horse-shoe: With Other Folk-lore Notes, by Robert Means Lawrence, M.D. It’s from this book I find my information.

All over the world, there is folklore galore giving reason to the magical properties of our equine footwear, which I won’t delve too deeply into—it goes back thousands of years.

This is merely a sweeping glance as to why we regard the horseshoe the way we do.

We’ll start in an obvious place.

Turns out not only is the shoe lucky but also a horse’s hoof and the bones within. Who doesn’t want to wear a navicular bone around their neck?

Don’t tell your farriers this, though they probably already know, but it seems they may have some supernatural attributes of their own.

Some mythologies consider blacksmiths magical craftsmen because they seem to toy with fire and manipulate iron with ease. Both fire and iron are thought to have the ability to scare away bad spirits and since horseshoes are made from fire and iron, it makes sense they too, should hold power.

Iron and steel have long been thought to ward off bad things, be it malevolent spirits, goblins, witches, fairies, ghosts, fiends, ne’er-do-wells as a general sort, the evil eye and/or sickness.

A horseshoe cast in iron with its smooth graceful shape was convenient to carry around or place above a doorway. Far more pleasing than an iron rod. To these believers, the horseshoe was simply a handsome piece of iron that could keep them safe.

The crescent shape has everything to do with the wax and wane of the moon, and as luck would have it, the horseshoe is crescent-shaped. People used to feel the crescent moon, either coming or going, influenced crop production and many other things, depending on when and where you lived and the religion you followed.

This crescent shape is the reason why some animal horns and claws are viewed as amulets.

It is believed that the horseshoe acts as a protective device when the heel ends point down and supplier of good luck when the heels point up.

St. Leonard is the patron saint of horses and travelers, and it was common to see a horseshoe or horseshoe-like symbol on the doors of churches. Back in the day noblemen would leave an offering to St. Leonard in the form of a horseshoe nailed to a church door before heading out on an “equestrian journey.”

Horseshoes, in case you didn’t know, are “bifurcated,” which is to say, two-pronged. And things with two such pointy ends were thought to ward off demons. Add the magical powers of iron, fire, crescent shape and the way we hang a shoe and we can’t lose.

In ancient times some felt as though the horseshoe resembled the body of a serpent. Admittedly, you have to stretch your imagination a little to make that fit. However, if we think back to the bifurcated properties of a horseshoe you can imagine one end being the head of the snake and the other being the tail.

Snakes aren’t a sign of evil to everyone. In some ancient cultures, people believed the serpent was bestowed with divine qualities. These qualities were attributed to its ability to renew its youth by shedding its skin, its graceful and effortless movements, its knack for swiftly striking its prey, and, of course, its bright piercing eyes.

Many felt iron also had medicinal properties. The treatments varied widely but it was a common understanding that a cast horseshoe and its nails could remedy such ailments as whooping cough, hernias, gastric issues, rickets and even hiccups. In some cases, just the shape of a horseshoe branded into a wood plate was enough to cure what ailed you.

There is no definitive starting point and no single belief as to why the horseshoe is considered lucky or protective. It’s an unanswerable question and we will just have to roll with it, as we have done so for thousands of years.

As Robert Means Lawrence wrote nearly 150 years ago, “The world moves and civilization progresses, but the old superstitions remain the same. The rusty horse-shoe found on the road is still prized as a lucky token, and will doubtless continue to be so prized; for human nature does not change, and superstition is a part of human nature.”

I’d say Lawrence was right on the money.