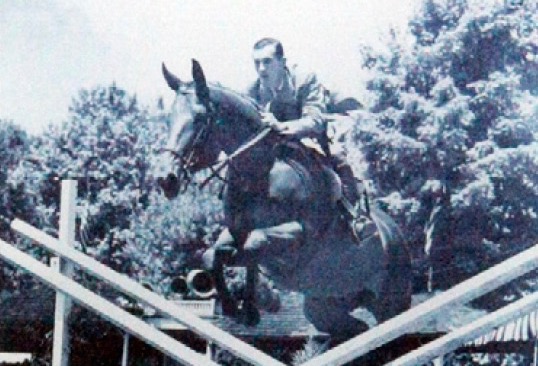 Robert “Bobby” Egan, a horseman for seven decades, gained early confidence in his skills as an instructor in the U.S. Cavalry during World War II and became a standout show rider in the Post-War era. Sun Beau, a 17.1 h., Canadian-bred, chestnut gelding, posted many of his biggest wins with Egan in the saddle.

After returning from the China-Burma-India Theater and leaving the service in 1946, Egan worked in California with his father and earned the ride on several noted horses, including Peggy Platz’s Carbon Copy. A smooth and stylish rider, Egan eventually moved on to Cleveland and took over the jumper string of Sterling Smith of Ravenna, Ohio, which included the outstanding jumper Sun Beau.

A typically dominant Egan performance with the Smith string was Devon’s 1949 renewal. Riding five Smith horses, including Sun Beau, Egan won every jumper class but one, and finished second, third and fourth in that one.

During his lifetime, he established a solid reputation for sportsmanship and for riding and training some of the nation’s greatest hunters and jumpers. Among the many top-caliber horses he piloted in addition to Sun Beau were Blue Monday, Mr. Deliberate and the great Miss Budweiser.

Hall of Fame rider Adolph Mogavero, who competed against Sun Beau, remembered him as “one of the greatest horses ever.” Mogavero went on, “He could jump anything, and if he were still in his prime he would be just as competitive today.”

Fellow Hall of Famer Bill Steinkraus agreed. “Sun Beau was the most impressive jumper of the late 1940s, and had everything a top international horse required. In fact, I can remember walking the 1948 Olympic course in London as a spectator and thinking, ‘If I were riding Sun Beau, I bet I could jump this course clean.’”

Sun Beau topped the American Horse Shows Association national jumper standings in 1948 and 1949 and won the coveted overall Professional Horseman’s Association award in 1949. That year he was placed in 78 classes, winning 43 of them at shows like Devon, Harrisburg and the National and also garnered 14 jumper championships. Though Sun Beau is best remembered for his collaboration with Egan, he also had much success with George Braun and Freeland Evans in the irons.