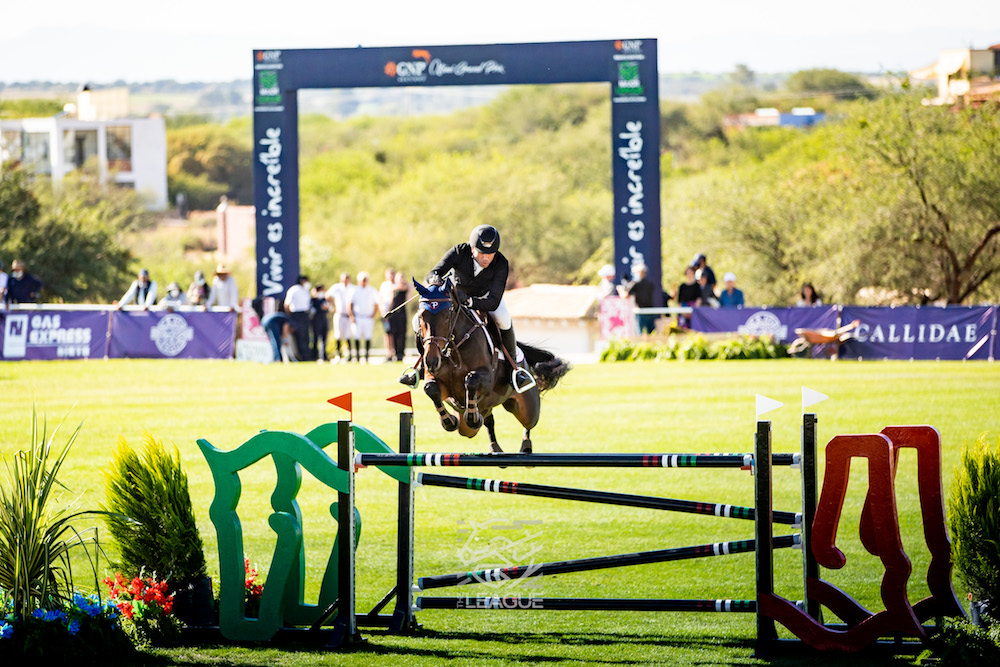 San Miguel de Allende in Mexico is full of surprises. So too was the MLSJ Team Event.

The seventh stop of the 2021 Major League Show Jumping Tour saw the strongest field of competitors yet. But true to the MLSJ format, the Team Event proved once again that any given Friday on The League is anyone’s game.

On paper A.I.M. United was a clear favorite

Three Olympic riders on three proven winning mounts, the smart money was on A.I.M. United for a podium finish, if not a second series win in Mexico. Eugenio Garza (MEX) led the team off with a four fault score aboard his Tokyo Games partner Armani SI Z, putting the team in the hunt. Ashlee Bond (ISR) and Lazy, her clear jumping partner from Angelstone, came next, but the uncharacteristic round that followed saw A.I.M.’s medal hopes evaporate. The pair caught a rail at fence 3, another at 5b, then two more before running out at the triple. With a team total over the cut off, Bond opted to retire. The team pegged to win ultimately finished last. #thatsshowjumping

Otomi Warriors went down in battle

The hometown favorites Otomi Warriors were coming off a podium finish in Caledon and fielded two of their strongest riders in San Miguel de Allende, riding six-time Olympian Rodrigo Pessoa (BRA) and championship veteran Nicolas Pizarro (MEX) along with team rookie and MLSJ staple Daniel Rihan Jr. The mission: a hometown win. Pizarro’s clear started the team on the right foot. But their efforts were hobbled when Rihan lost both his stirrups at 5b. Despite a valiant effort to continue, he ultimately fell off after the first element of the triple combination. They finished seventh.

Eye Candy did not make the medal rounds

With an 11 point lead going into Stage VII, Eye Candy changed up their winning formula of Amy Millar, Jacqueline Steffens and Paul O’Shea this week, instead riding the team’s three new recruits from the trade portal. Rookie Emma Marlowe made her MLSJ team debut riding to a 12 fault finish. Simon McCarthy (IRL) posted a speedy eight and Conor Swail added four to the team total, to finish on 24. The team currently at the top of the rankings settled for sixth in San Miguel de Allende. They’re still sitting in the sweet spot atop the leaderboard, though.

The Charms ran out of luck

Lucky Charms fielded a strong team with proven podium makers Shane Sweetnam (IRL) and Birdy Du Thot, Lacey Gilbertson (USA) aboard Byzance Mail, and Jordan Coyle (IRL) with Picador. Drawing first in the order, the team ranked second on the championship leaderboard going into phase VII picked up 4, 8, and 4 faults, respectively, to tie with the Crusaders in Round One, but fell one second short the cut line with a team total time of 216.50 seconds to Crusaders, 215.38s. It was good enough for fifth.

The Devil’s in the details

Diamond Devils’ Erynn Ballard (CAN) and Roadrunners’ Christian Heineking (GER) faced off in the bronze medal match and there was only a hair’s breadth between them. First to return, Heineking and NKH Cento Blue stopped the clock at 46.86 seconds. Ballard and Huberth B matched the pair nearly stride for stride, but landed some two hundredths of a second (47.11s) short of the podium.

Sitting in eighth on the team standings, Blazing 7s were in serious need of a points boost and they got exactly that in Mexico. Represented by Cara Raether Carey (USA), Nicolette Hirt (USA) and Rodrigo Lambre (BRA), the team with the most to lose had the most to gain, finishing second. Blazing 7s are still in eighth overall, but are now well within striking distance at just a point behind Otomi Warriors (29 points) and two from Diamond Devils and A.I.M. United (30pts)

The one horse race that’s been Eye Candy atop the leaderboard race got a lot more crowded after San Miguel de Allende. The Crusaders squeaked into the second round with a 16 fault team total in round one and fought their way to a second series win—this time with an entirely new roster, featuring two riders they picked up during the trade portal. Patricio Pasquel (MEX) and Yoga Santa Rosa, riding for the Crusaders under the substitute rule, posted the fastest jump off time of the day, racing through the timers in 43.43—a full second faster than the closest runner up, Crusaders teammate Samuel Parot (44.49s). Roadrunners Kaitlin Campbell and Palina de l’Escaut were the only other combination to come in under the 45s mark (44.96).

After Phase VII, Eye Candy has a now tenuous hold on the leaderboard at 46 points to Crusaders 42 points. The Crusaders plan to ride the same team in Monterrey in two weeks time for Phase VIII. Whether an Eye Candy veteran or two makes a reappearance then remains to be seen.