A Race Day in Ireland 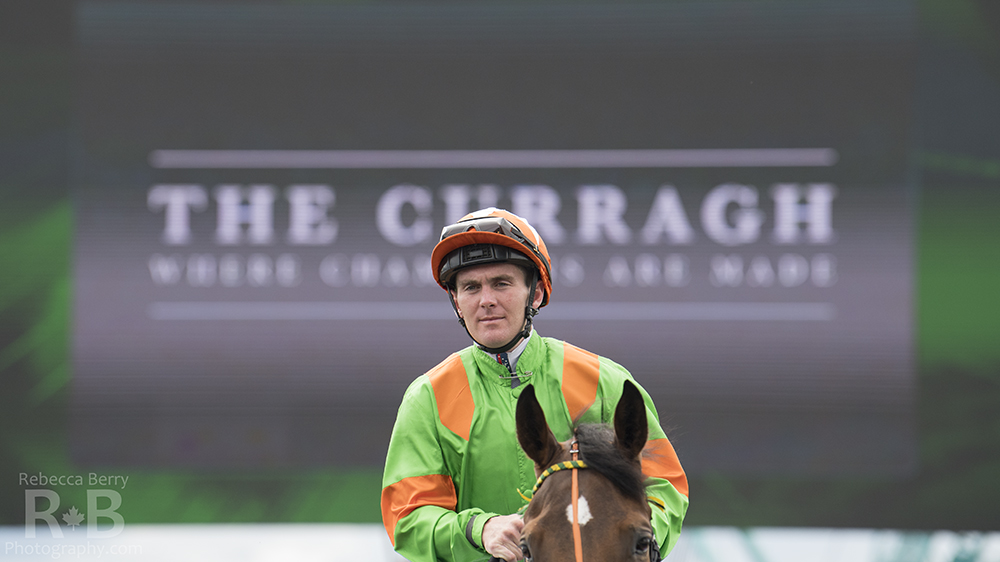 While at the Dublin Horse Show in 2018, I got a sense of how many horses occupied Ireland and felt staying an extra week would allow me the time to see more.

I took to the internet in earnest and searched for “horse things to do in Ireland in August.” A wordy but fruitful search. The Curragh Racecourse in County Kildare had a few race days over the coming weekend.

I researched the track and learned that it’s exceedingly well known, just not to me apparently, and has been running horse races, in one form or another, since 1727. It’s located within the 5,000-acres of the Curragh Plains, which is home to archaeological sites, rare grasses, folklore, myths as well as military and equine history. I must admit I had no idea there was such a thing as rare grass, but there it is.

The other important piece of information I stumbled upon was if I wanted to sound like I knew anything about horse racing in Ireland, I’d better refer to the racecourse as simply, The Curragh.

Full of facts, I hopped into a taxi in Ballsbridge, which took me to a bus in Dublin, that left me standing near a decorative potted tree in Kildare Village, which is an outlet mall. I was surprised to see a mall, though I’m not sure why. I suppose in my mind, Ireland is nothing but green fields, four-leaf clovers, mighty cliffs and angry seas, complimented with Connemara ponies, Irish Draughts and sheep. Not malls. Yet there I was and there it was.

It was at this tree I waited for the shuttle to the races. Away from the outlet, the town of Kildare is better able to express itself. It’s a quaint fifth-century place, the type you’d see on a postcard, with a market square, cute shops and vibrant hanging baskets strung about. Close to the center of town sits St. Brigid’s Cathedral with as much history as Kildare itself. Sharing the cathedral grounds, but seemingly unrelated is a 108-foot-high round tower that is only 1,000 years old. The mind boggles at the age of things.

The shuttle wound through the town making unpredictable turns and I lost my bearings immediately. I looked for signs pointing the way to the racetrack but saw none. I knew the Irish National Stud was somewhere in the vicinity but there was nothing to suggest it.

And then in a blink of an eye, Kildare gave way to the vast and verdant Curragh plains. The change was so abrupt I thought perhaps I had nodded off. But I hadn’t. The town ends exactly where the plains begin in a clear, if not stark, line.

The narrow road splices through the grasslands like a scar, ugly and out of place. To my right and far into the distance I saw a structure but was unclear what it was. To my left, the scene stretched indefinitely with only groves of trees and low rolling hills disrupting the flatness and white woolly sheep dotting the endless green.

The sheep were unchaperoned and left to wander with reckless abandon over 3,500-acres of commonage. They crossed the road without a care, even with our little shuttle hurtling along in the same cavalier manner. I waited, with gritted teeth, for the inevitable thud and bump.

It appeared several sheep had already met an early demise and were left for dead on the edge of the road. The destruction of so much life was upsetting, and I could only have wished someone had warned me that the road to the famous Curragh Racecourse was paved with the woolly coats of dead sheep.

My excitement waned. I stared as we passed the strewn bodies willing one of them to move. And then, as if by telepathy, an ewe lifted her head.

“That one isn’t dead,” I said to the Irishman beside me.

“People always think they’re dead,” he said. “Strange they like to sleep on the edge of the road.”

These were the bravest sheep I knew.

The shuttle pressed on, eventually taking a sweeping right turn pointing us toward the unidentified structure I had seen earlier. I surmised it was the racecourse.

And indeed, it was.

As we neared our destination it was impossible to miss that the track was undergoing a revamp. An €80 million revamp, I later learned. Neither the old racecourse nor the new would I see, but rather catching it in a state of flux.

I made my way through the turnstile and followed a gravel pathway into the land of confusion. For what awaited me was a dizzying array of Irish racetrack wonder. There were three paddocking areas, a partial castle, a sea of colorful umbrellas, a temporary grandstand, a grandstand under construction, a stage and a beer garden. And I hadn’t yet seen the track or the horses.

I set out to find the turf course so that once the races started, I could beat the crowds to the rail. It was easy to find and magnificent to see. The view from the rail stretched over the vast plains, and the track was so wide it was divided into thirds to preserve the footing for future race dates. You could, should you want to, land an Airbus A380 and still have room to run a race. I’d never seen anything quite like it.

Confident I could relocate the track I set off to find the horses, and immediately found myself amid the umbrellas. The bookies. I’m so easily thrilled by things and was swept up in the romantic gangster idea of bookmakers, such as it is. I watched as punters handed over their money to the bookies who were all perched on wooden crates, wearing cheap suits and smoking cigarettes.

Since I have little idea what I am doing when it comes to betting at the best of times, I left it to the pros and set off to watch the horses in the second paddocking area.

The horses were impeccably turned out with colored browbands, quarter marks and braids. They were bright-eyed but well-behaved. The grooms were tidy, and the trainers, smartly dressed. It looked like a derby day, but I believe this is just how the Irish do racing.

It took until race four to notice a map of the grounds in the racing program, which neglected to explain the need for three paddocking areas. The program did however name two of the three paddocks. The horses enter the nameless one first and are walked around and tacked up before moving onto the pre-parade ring. And 10 minutes or so before the start of the race the horses funnel into the parade ring.

Pleased with myself for solving the mystery, I realized I hadn’t eaten and made my way to the partial castle. Waiting in line, I learned the building was once part of the original grandstand built in 1853. It was designed as a fancy viewing area and created in the dim hopes that the Queen would stop in, thusly calling it the Queen’s Room.

But it wasn’t until 1861 the dream came to fruition. Queen Victoria, whilst visiting the Curragh Army Camp and her son who was stationed there, decided to nip over to the track, likely to lay some money down on a horse.

And there I was 150 years later, tea and chocolate chip muffin in hand, walking out of a building fit for a Queen. You just can’t make this stuff up.

With smudgy fingers, I made my way back to the rail to watch the final race of the day and it was the largest field I’d ever seen. Imagine, if you will, 33 horses galloping across a lush turf course, with endless views of the Curragh Plains, interrupted only briefly by the flash of colorful silks passing in front of you. The turf track dampening the sound of 132 pounding hooves, leaving only the vocal ushering of jockeys encouraging their horses toward the finish. I mean really, what an experience.

As the horses made their way off the track, the crowd turned and followed. Another day in Ireland done and what a day it was. Needing to catch the shuttle I retraced my steps down the gravel path toward the exit but before I was ushered through the gates, I turned to look one last time at the Curragh Racecourse, famous, even in its state of flux. The one state it shan’t remain long and I’m still unsure how I feel about that.

I boarded the shuttle and was whisked through the plains, the sheep having meandered away, perhaps home for the evening, leaving my mind settled in the knowledge we would not collide with one of our woolly friends.

Another gorgeous day in Ireland spent in the company of horses. What in life could be better than that?