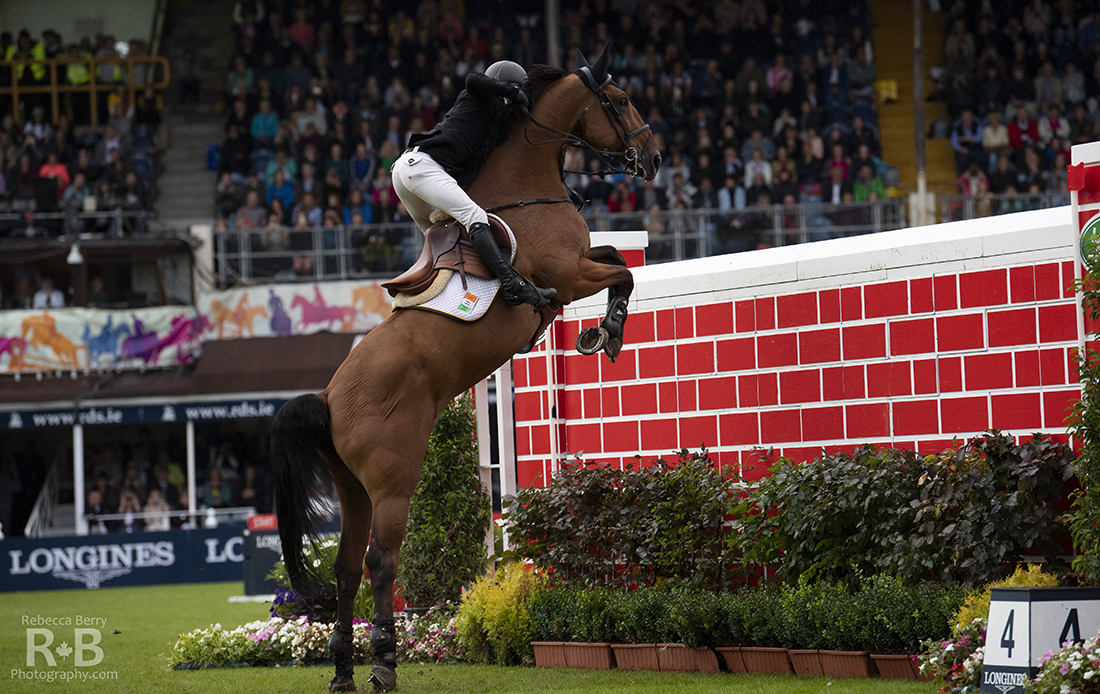 Something we’ve been dreaming about for the past year and a half. Perhaps now that the world is on the verge of reopening, it’s time to get back into the spirit of things. Then again maybe not. Either way, I’m going to take a moment to reminisce about a time when I considered myself footloose and fancy-free.

So fancy-free I went on an impromptu solo trip to the Dublin Horse Show in August of 2018.

The show takes place in the town of Ballsbridge, just two miles outside of Dublin. It is a small town but carries the enticing nickname of The Embassy Belt of Dublin, as it is home to 23 of them.

Despite my late decision to go to the DHS, and despite the magnitude of summer travelers and show-goers I managed to find an Airbnb that placed me half a block from the Royal Dublin Society where the show is held. This confused me initially as the RDS looked, for all the world, like a stone country house in the middle of town. Nothing about it screamed horse show. Nevertheless, I trusted the Irish knew what they were doing.

The next day, jetlagged but hopped up on excitement, I walked the half block to the show and entered the foyer of the stone building. In front of me stood several plastic tables holding an array of wrist bands, day passes and manila envelopes. Those manning the tables appeared flustered and surprised by the number of people eager to enter but everyone was helped in a kind, orderly fashion and then welcomed to walk through a single doorway.

I felt like Alice on the brink of discovering her wonderland.

I was ushered through the door and sent down a wide hallway with squeaky wooden floors. Within the first several feet I came upon a life-size cutout of the puissance wall built to the height of last year’s triumphant leap. And it was a high 2.21 meters or 7’5” in old money. These days I find cantering down to an 18” cross rail unnerving.

Further down to my left a set of double doors were propped open to entice showgoers into what I could only assume was 10 acres of shopping. If you wanted an antique, this was the place. If it was fine art and jewelry you were after, you need look no further. If new breeches, a bridle and a pair of custom-made sparkly tall boots was what you had in mind, well, they had those too.

It took me several days to find a shortcut preventing me from walking past vendors and spending money. But the beguiling nature of tack makes it too easy to just “swing” through the trade fair on your way to the competition rings.

Eventually and somewhat reluctantly, I found my way out of the vendor’s village and immediately found the horses. For behind the RDS building was a city block consisting of two gorgeous grass show rings, two warm-up rings, food trucks, Guinness stands and behind all that sits the main stadium.

I’d created an itinerary because with 35 classes and four demonstrations taking place in four rings, on day one I had to be organized. There were over 1600 horses and ponies competing in some of the 134 classes held with over €1 million in prize money.

But, my itinerary went out the window the second I spotted the grass rings with classes well underway. It was 10 a.m. on a Wednesday and I felt as though I had arrived late.

The Irish don’t mess around. If there is a show going on, it goes on. No namby-pamby warm-up days. Just bam and go. Let’s do this, we’ve got five days and we’re going to fill ‘em up. Or however an Irish person might say something like that.

The range of classes is broad and covers everything from side-saddle to Grand Prix show jumping. From Pony Club games to puissance. There is the serious Longines Nations Cup and the wild and woolly hunt chase.

There are masterclasses given by the likes of Mary King and McLain Ward, in-hand classes and demonstrations of varying descriptions. And because this is Ireland there are classes for Irish Draughts and Connemaras where canary-coloured breeches, tweed jackets, hunt caps, bowler hats, quarter markers and browband show numbers are all the rage.

Dozens of drink and food trucks line the road between the grass rings and the stadium. Enticing smells waft through the air luring you over. Guinness, champagne, wine, tea, coffee, bangers and mash, Irish stew, hamburgers, sandwiches, salads, and the sweet scent of pastries will weaken you to the point of saying, “Why not, we’re on vacation.”

I fought the ever-present urge to eat and made my way into the stadium where the national and international jumping classes take place. The first Grand Prix of the week was just wrapping up and once again I felt as though I was tardy.

The arena looked much the same as any major show ring might, however, this one had two water jumps, not the sort you jump over but rather jump in, a two-tiered bank fence and a devil’s dyke, which later I learned could be and would be jumped from every conceivable angle.

I left the stadium from the opposite end I had entered and found another city block of show grounds. More food trucks, Guinness stands, trade booths, another stadium and the international warm-up ring.

With every inch of the grounds sussed out, I treated myself to a cup of tea, a sandwich and a pastry. How could I not? While I ate, I perused the program and marked the classes I wanted to see. No more itineraries but careful planning was still in order.

In the coming days, I quickly understood that if there is a class you want to watch it will behoove you to arrive early because the crowds surrounding any ring will be five deep. Many spectators of the Irish Draught and Connemara classes can be seen busily making notes in the margins of their programs with an idea of buying, selling or breeding in mind. This is much more than just a show to them, this is a part of life and business.

The international warm-up ring is no exception. Hundreds of people line the fence so they can watch Olympic gold medalists talk with their Olympic counterparts while they warm up Olympic hopefuls. It’s like watching the red carpet on Oscar night, only interesting.

This was my first time at a major show outside of North America and I can honestly say there is no comparison. The fans are educated horse people, they are boisterous and they are not above doing the wave. The exuberance and fervour of the crowds during the big classes, rivals any sporting event, football, hockey or otherwise, and you’ll find yourself, reserved though you may be, getting caught up in the hoopla.

From Olympians to Pony Clubbers and everything in between the Dublin Horse Show has it in spades and will remind you not only how amazing horses are but how amazing life is.

If you want a holiday in a beautiful country filled with kind people and gorgeous horses, then I say, “Go!”