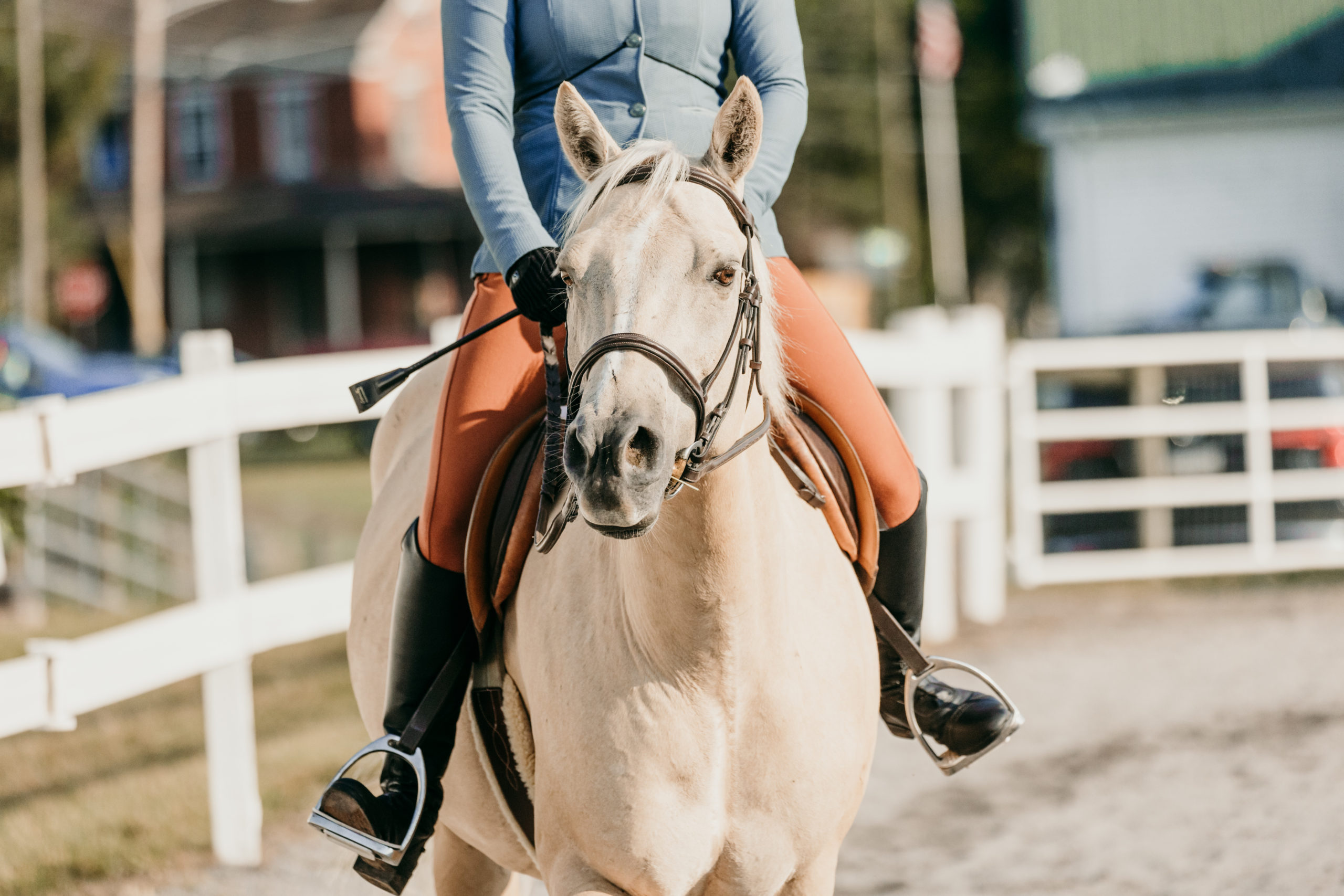 In November 2016, Have a Happy Holiday, now called Buttercup, arrived at Days End Farm Horse Rescue (DEFHR) in Woodbine, Maryland, as one of 15 horses that were seized from a farm in Prince George’s County, Maryland, as part of a neglect case.

While the horses had received very basic care, including shelter and food source, they were often getting loose from their pasture, which was situated in an area with major roadways and high traffic. Because animal control officers were routinely rounding them up and putting them back, a warrant was obtained to seize the horses as their escapes were becoming a threat to the safety of the public as well as their own.

When the horses were examined upon intake at DEFHR, they were found to be parasitic and suffering from some degree of dental and hoof neglect due to lack of veterinarian, dental, and farrier care, but none were emaciated or starved. Additionally, the horses had demonstrated some degree of training and experience with humans as they were tame and able to be handled without issue.

In Buttercup’s case, according to DEFHR Equine Programs Director, DeEtte Hillman, she was a gem from the start. “She was a quiet, educated, and knowledgeable mare,” Hillman noted.

After a brief rehabilitation and acclimation period on the farm, Buttercup entered into the rescue’s training program in January 2017. Head Trainer, Sara Strauss, recalled that it was apparent that Buttercup had solid training under her belt but had some minor quirks to work through including “little protest bucks” and picking up the correct lead when she was reintroduced to the canter. As her fitness improved, so did her performance and before long, she was participating in DEFHR’s drill team at the Montgomery County Fair.

“She was a rock star about the crowds, music, and clapping,” said Strauss.

In August 2017, Buttercup got her big break and was adopted by her forever family, Catherine and her daughter Gillian. Both Catherine and Gillian had been taking lessons at a hunter barn but didn’t own a horse. When it was decided that they’d like Gillian to have a horse of her own, adopting through DEFHR was a no brainer.

“I’ve always wanted to look at a rescue first,” Catherine explained. “I like to give animals second chances and I have a soft spot for the ones that need somewhere to go.

“DEFHR was recommended to us by a friend because they were really impressed by the screening and adoption process,” she continued. “Our friend shared that the trainers and staff have already vetted and trained the horses so they would be very upfront and honest about the horse we’d be getting.”

Before they set foot on the farm, Catherine promised herself she wouldn’t look at color or breed, she just wanted a good brain and a horse that would help build her young daughter’s confidence in the saddle. Though Strauss hadn’t campaigned Buttercup as a hunter prospect and had been riding her in a western saddle, after learning more about what Catherine and Gillian hoped to find, she felt the mare might be fit. As it turned out, Buttercup was willing to jump small fences and it was obvious she was smart and kind, so Catherine found herself going home to Pennsylvania with the palomino Quarter Horse in tow.

It wasn’t smooth sailing from the get-go, however. “The first issue was definitely trust,” said Gillian. “She was a little testy when we first got her, I think because someone broke her heart.”

Thanks to Gillian’s dedication as well as support from her trainer, Buttercup began to adapt to her new environment and rider, and the pair began to foster a special bond that has helped them conquer different goals in the ring.

Though the two started in the hunters, Gillian recently introduced Buttercup to dressage. This season, they’re competing in both hunters and dressage and they’ve held their own across rings.

“She tries so hard, no matter what you ask her to do,” stated Catherine of Buttercup’s willingness to dabble in a new discipline. “I keep in touch with Sara [Strauss] because we are constantly trying something new and it’s really amazing. Buttercup has this remarkable bond with Gillian and if Gillian asks her to do something, she is going to try.”

Though it’s through Gillian’s patience, kindness, and the support system around them that have enabled her bond with Buttercup to flourish, Catherine credits DEFHR with setting up the match and remaining in close contact throughout the initial years of the partnership.

“I like the fact that DEFHR wants to send the horse to the right situation. For two years, DEFHR would come out and check on her to make sure she was still in good shape. I really believe in that process.”

Having recently celebrated four years with Buttercup, Catherine looked back on old photos and noticed a striking change in the mare. “Four years ago, versus now, her eyes are completely different,” she said. “She initially looked sad and empty, and now, she’s content and confident and she is where she belongs.”

It’s obvious that Buttercup not only helped Gillian grow as a rider, but Gillian helped her mare learn to trust and enjoy life again.