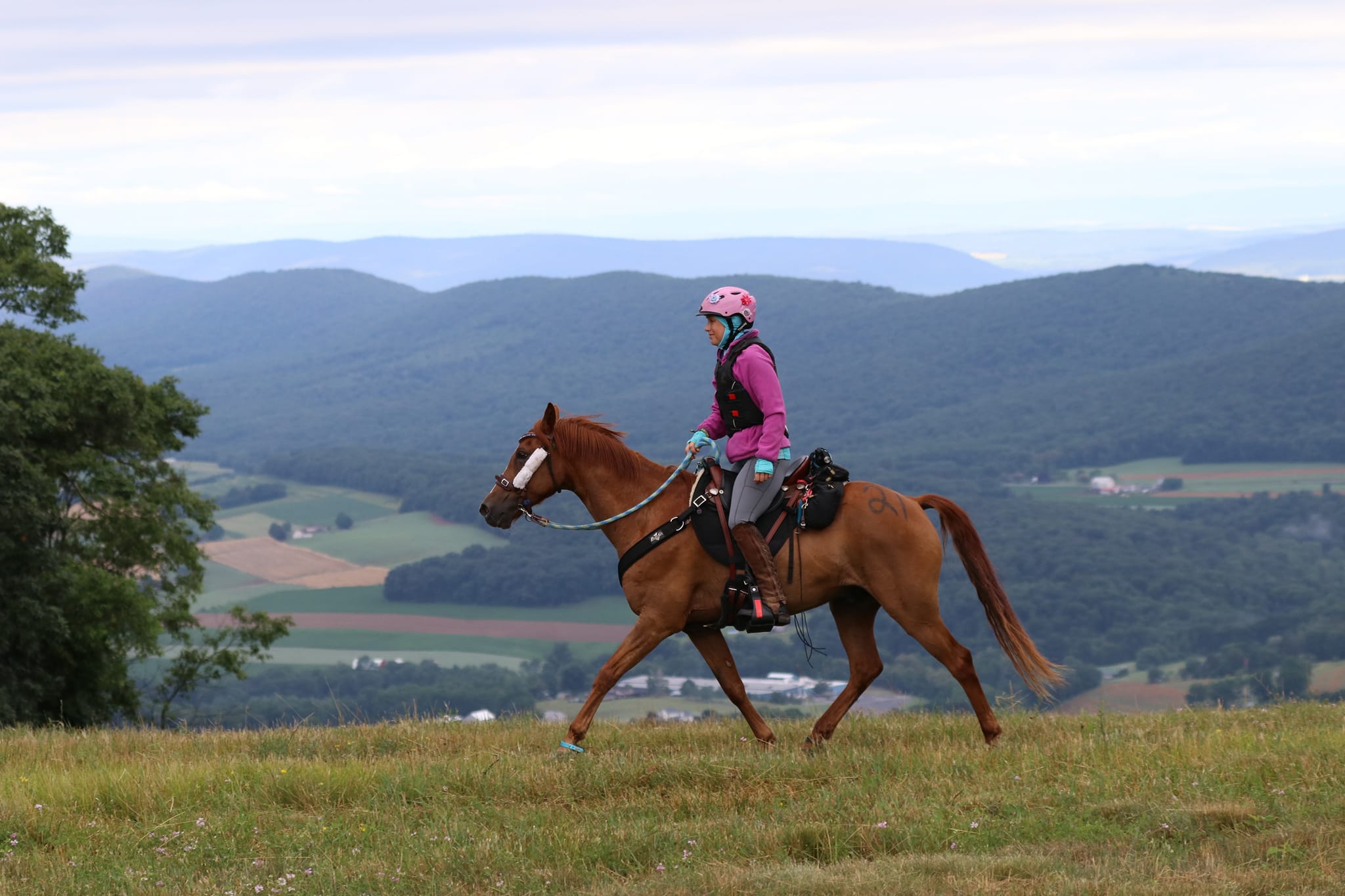 Nicole Wiley is a lifelong horse lover and rider. For years, she rode an Andalusian mare of her own named Bella, but when the horse had to retire unexpectedly at the age of nine, Nicole’s riding took a backseat.

Around that time, Nicole’s priorities had also changed with the adoption of her daughter with special needs. Though the combination of circumstances kept her out of the saddle, she was still surrounded by horses, taking her daughter to therapeutic riding lessons and caring for her mare near her home in Pennsylvania.

In 2019, Nicole decided to take a leap and move her family and her horse to a farmette in her hometown of Mt. Airy, Maryland. The new setup would enable Nicole to keep Bella at home and also allow her to find a new riding partner that could double as a herdmate for her mare. Set on adopting a rescue horse, Nicole turned to Days End Farm Horse Rescue (DEFHR) in nearby Woodbine, Maryland, where her daughter had been enrolled in summer camp.

Nicole’s search for the perfect equine match, however, had very specific requirements.

Though she’s adventurous on horseback, Nicole is also severely epileptic and had recently found herself wheelchair bound. Paralysis and seizures caused by epilepsy mean Nicole can fall without much warning, so finding a horse that was small in stature, trustworthy, and also athletic was a must.

When she first laid eyes on photos of DEFHR rescue pony, “Olly Olly Oxen-Free,” jumping cross country, Nicole recalls falling in love instantly. And, at just 14.2 hands high, he was the smaller build Nicole was seeking. Nicole’s application was accepted and before long, the pony­—renamed Prince Ali—was settling in on Nicole’s home farm.

It wasn’t smooth sailing from the beginning, however.

Ali had arrived at DEFHR as a neglect case, underweight, and nervous to make a wrong move. Once he had fully rehabilitated, Ali, like every adoptable horse at DEFHR, went through the organization’s training program designed to help the horses regain trust, build strength, and also help DEFHR staff determine the type of home that will best suit each horse. Though Ali improved greatly over the course of his six months in training, Nicole recalls it took her nearly three months to earn his trust on the ground.

“I tried to ride him two days after he came home,” said Nicole, “but he let out a huge buck. I had to start him slower, beginning on the lunge line.”

Despite Ali’s difficult past, Nicole’s patience and kindness with him paid off. Nicole took the time to learn Ali’s preferences, notably that he didn’t like wearing a bit and was much happier in a bitless bridle. Nicole worked hard and Ali has rewarded her in spades, proving to be the talented and caring partner she hoped to find.

Though riding with epilepsy comes with its own challenges and inherent risks, none of it dampened Nicole’s spirit and drive for adventure. Ali’s bitless bridle meant Nicole’s initial plans for competition would need to change as most hunter and dressage competitions require a bit, so at the suggestion of a friend, the pair began competing in endurance in early 2021, and recently completed their first 30-mile competition.

It was during this ride that Ali’s athleticism caught the eye of a seasoned competitor. “She told me I had a 100-mile horse and offered to buy Ali,” Nicole said of the woman. “I had a feeling I did. He can set a pace and keep it. He gets me so excited and I’m hoping to compete in the Tevis Cup in a few years.”

Nicole and Ali’s lofty goals, however, wouldn’t be possible if it weren’t for the unique relationship they’ve built. Ali, whom Nicole affectionately calls “Big Man,” has taken it upon himself to watch out for his rider, and in the last year, Nicole said something really clicked with the two of them.

“He’s got my back, and I have his,” Nicole shared of their partnership.

“He’s also very intelligent—smart like a dog,” she continued of how Ali has become sensitive to Nicole’s needs. “On conditioning and competition rides, he senses when I’m starting to conk out. He lifts his head and puts his ears back, waiting for me to let him know if I need a break. I also taught him to halt when I whistle.

“I’ve fallen off of him twice during trail rides [because of seizures], and he’ll stop and munch on grass right next to me until I come to,” she added.

Two years into the partnership, it’s evident that both horse and rider have overcome significant personal challenges by working together—but none more special than Nicole’s tremendous physical improvement.

“I was wheelchair-bound before I adopted Ali,” she said. “[Since consistently riding again] I haven’t used a wheelchair in over a year.”

Nicole explained that riding has helped keep her neurons connected (and muscle memory strong for everyday life)—a critical factor in minimizing the side effects of epilepsy such as paralysis and seizures.

Without a doubt, Ali has helped Nicole physically and emotionally, but what makes their story all the more special is how Nicole also helped Ali. He arrived at DEFHR nervous and shut down because he’d been hurt by the humans in his past. Through his thoughtful rehabilitation and training at DEFHR and Nicole’s unwavering patience and kindness, Ali has also conquered insurmountable challenges that arose as a result of his neglect. Together, Nicole and Ali have demonstrated the power of partnership.

“I’m so in love with this horse,” said Nicole. “He’s come from such a horrific background and what he’s done for me is unheard of.”

Surely, if Ali could talk, he’d say the same about Nicole.