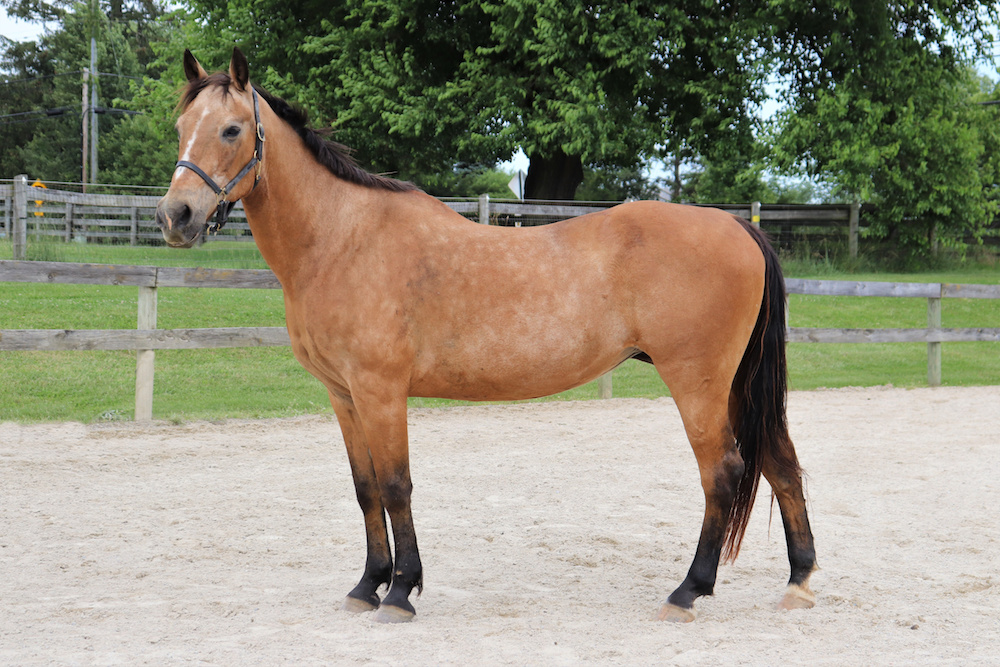 In December 2020, Golden Girl, a mare in her late 20s, arrived at Days End Farm Horse Rescue (DEFHR) in Woodbine, Maryland, along with 17 other horses from a local community stable that had long offered riding lessons and trail rides to the public.

Golden Girl, like her barn mate and DEFHR alumni, Louie Lane, had been a mainstay in the barn, carefully and willingly carting around visitors for many years.

Though she was a trustworthy and dependable lesson and trail horse, it was clear to DEFHR staff upon her arrival that, as an ageing horse, her needs were not being adequately met. In addition to being emaciated, Golden Girl suffered from severe ulcers in her mouth due to poor quality hay with foxtail, a high parasite load, and was “quidding”—the inability to chew and process her food due to poor dentition.

Not to mention, Golden Girl was also being ridden in her declining condition. According to DeEtte Hillman, DEFHR’s Equine Programs Director, “as horses age their needs change, dental requirements become more urgent and diets need to change, so as a result, feed and management programs need to be adjusted accordingly. Unfortunately, it was clear that Golden Girl hadn’t been given the attention and care specific to her evolving needs.”

Golden Girl’s neglected teeth and likely painful mouth, made eating challenging for her and contributed to her emaciated state, so DEFHR staff took a more aggressive approach than usual to determine what they were dealing with and how to proceed. The process began with an accelerated dental exam that ruled out any possibility of Golden Girl rehabilitating on a forage-based diet given she had almost no teeth.

“We had to switch gears pretty quickly,” said Lynn Garvin, DEFHR’s Equine Health Manager. “The majority of rehabilitation through feeding at DEFHR is forage-based because it’s safe and more natural. With Golden Girl, every calorie came from the senior feed and softened alfalfa cubes we put in a bucket. This was definitely a departure from our typical protocol.”

Though Golden Girl’s unique feeding regimen set her on the right path, there were still a number of barriers she would have to overcome before DEFHR staff would feel confident that she would be able to rehabilitate. During her tenure at DEFHR, Garvin learned that not all horses can be rehabilitated, sometimes ending their suffering is kinder, but that was not the case with Golden Girl.

“There really is no excuse for an aged horse to be in this condition,” shared Garvin, “and I wasn’t about to give up on her now—she had come too far and she deserved to live her ‘golden years’ healthy and pain free. Despite the additional time and effort that goes into rehabilitating an older horse in this state of neglect, I just kept saying ‘let me try something else,’ and thankfully because of the supportive team (volunteers and staff) around me and the 30 plus years of experience DEFHR has in rehabilitating horses of all breeds and ages, we were able to figure her out.”

For Golden Girl, after a lot of trial and error, the turning point came when Garvin tested her for Cushing’s disease and she turned up positive. “Once we treated her for Cushing’s, we saw her gain weight in a more natural pattern and the old, gross hair she had been holding onto began to shed, which gave way to a much better coat quality.”

DEFHR staff fought to bring Golden Girl back to health, but they weren’t alone in their efforts. Golden Girl also made it clear that she was willing to fight just as hard.

“She is a people’s horse, always more interested in the humans around her rather than her barn mates,” said Hillman. “Her personality was ultimately a big factor in us continuing the rehabilitation efforts. We were constantly wondering ‘can we save her?’ as well as ‘are we doing the right thing by saving her at this age?’, knowing that rehabilitation of a senior mare in her condition was going to be difficult.”

Garvin agrees that Golden Girl’s winning personality played a part in the team’s dedication to helping this very senior mare. “She’s hilarious,” added Garvin. “She can open latches and gates and would let herself out of her stall once a week. She’s very social with humans but also bonds closely with her equine companions. She also loves a routine—anytime you interrupt it she has something to say about it.”

Living out her golden years

“The attention to the little details for the aging horse needs to increase every year,” stated Garvin. “For current horse owners or those considering adopting a senior horse, it is important to consider the steps they will need to take down the line. This includes the kind of dental work they require, metabolic changes, arthritis, parasites, and more. These factors all play a role in the aging horse and, if not attended to, can cause a faster rate of decline.”

Looking ahead, once Golden Girl is at a consistently healthy weight, DEFHR staff will search for a loving home via the organization’s Guardian Program that will allow her to live out her days as a companion horse. Though senior horses require more specific care, both Hillman and Garvin agree that Golden Girl’s requirements are not unreasonable for an adopter. In addition, through the Guardian Program, DEFHR retains ownership of the horse but enables adopters to write off the care of the horse as a charitable donation.

“They will have to put the work in,” concluded Hillman, “but when they do, Golden Girl will reward her adopter 100-fold; she will love them and provide an immense amount of joy.”