The Emancipation of Hard Luck Louie 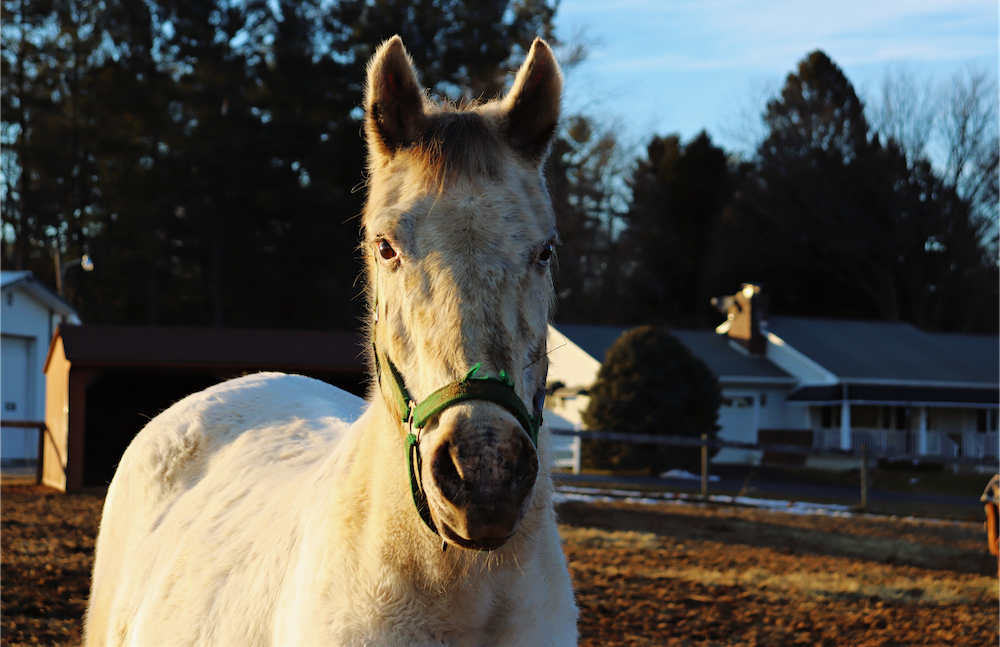 Louie Lane, a 15-year-old Appaloosa gelding, was one of those horses.

He arrived with 16 other horses in December from a local and long-running trail riding stable that also offered lessons, boarding, and sales. As one of the stable’s primary horses, Louie dutifully and carefully carried hundreds of people during his tenure—navigating trails and patiently helping the stable’s customers learn to ride.

Louie was, without a doubt, a trustworthy and reliable mount who earned money for the stable with each ride he gave. Sadly, however, Louie’s hard work didn’t earn him much in return.

When he wasn’t working, Louie was forced to live in hazardous conditions. The fields on the farm’s 70 acres were filled with dangerous debris, mud, broken fences, and the remains of horses that had perished there. Despite these challenging conditions, Louie managed to roam the fields safely—a feat for any horse, but especially for a blind one. Due to untreated uveitis in both eyes and advanced cataracts, Louie’s vision diminished, and at best, he is able to see shadows.

In addition to vision loss, Louie arrived at DEFHR emaciated and with a heart murmur due to his weak condition. His skin was covered in cuts and scabs from lack of grooming and exposure to the elements. Large, painful ulcers caused by hay riddled with foxtail—spikelets of grass that can cause blisters, ulcers, and gastrointestinal tract irritation when consumed—covered the inside of his mouth making eating a struggle.

So, how does a horse that has endured so much suffering, like Louie, remain sharp and resilient? According to DEFHR staff, though Louie had been a leader and a teacher for so many years, he also understood he’d have to learn to adapt to his worsening state if he wanted to survive.

Almost immediately, his behaviors revealed how he learned to safely navigate an unsafe home.

When Louie was introduced to his new stall, it was immediately clear that he was eager to understand the layout of his new home. He cautiously circled his stall for hours, nose first, memorizing the surroundings.

He mimicked this behavior when he was later introduced to his paddock, skillfully taking time to get a sense for its setting. When his herd mates walked away from him, he would slowly circle and call out until he found his friends again. It became obvious that it was Louie’s level-headed nature that enabled him to survive the dangers of his previous home.

Despite Louie’s past and the challenges he still faces as a blind horse, he, like many others that come through DEFHR’s gates, has demonstrated unwavering forgiveness and has been an absolute gentleman throughout his rehabilitation. He is well-behaved for his vet and farrier appointments, waits patiently for his food, loves his grooming sessions, and he enjoys being hugged and doted on by everyone on the farm.

In the time that Louie has been at DEFHR, his mouth has healed, and he has steadily gained weight. His skeletal protrusions are fading away, replaced by fat and muscle. His skin is now healthy and clean, and a shiny new coat is growing in. The team at DEFHR says that while he’s always been easy-going, his attitude has brightened, and his face now longer bears signs of pain or uncertainty.

Not all horses are as lucky as Louie, but he is a paramount example of the nature of the equine soul. Louie’s perseverance and resourcefulness allowed him to be rescued. Now, surrounded by love and support, DEFHR will ensure that he has the greatest opportunity to make a full recovery and find a loving home that will appreciate him for the wonderful being he is.