Horses at the Olympic Games, from Ancient to Modern

Home > Blog > History > Horses at the Olympic Games, from Ancient to Modern 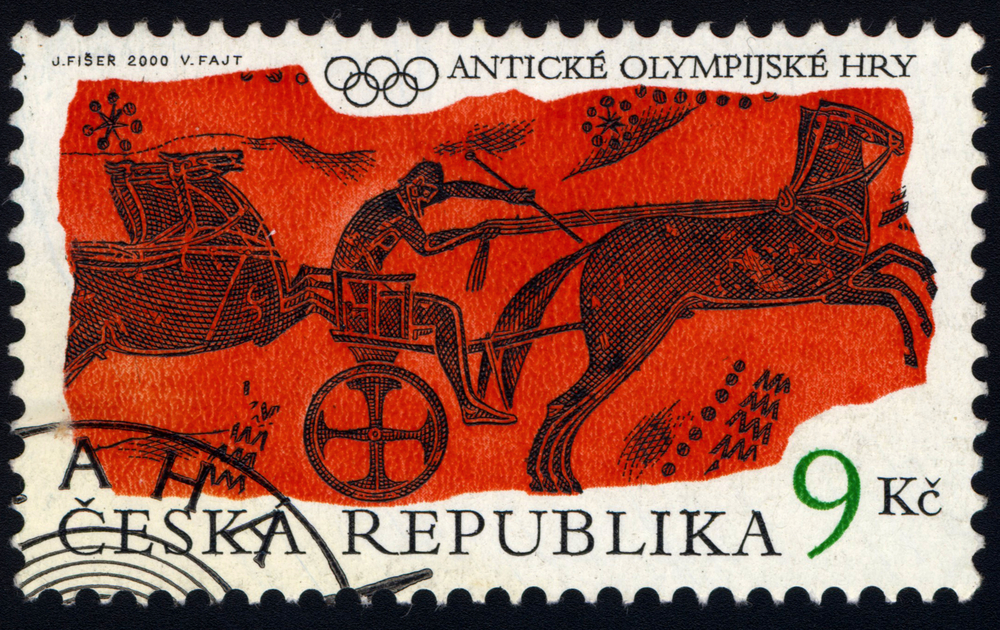 Horses became involved in Olympic competition approximately  680 BC when chariot racing was introduced.

Then, as now, the animals were considered as much athletes as their riders.

In the chariot events, there were races for teams of two horses, mules and even foals but the most prestigious was the race that consisted of four horses pulling a precarious vehicle called a quadriga, which was little more than a platform balanced on an axel between two wheels.

As in the modern Games, both men and women could compete in the same race—then a nine mile long effort consisting of 12 laps. The course was not a sweeping oval like today’s tracks but a long rectangle with a post at each end, around which the competitors were required to steer. There are no visible remains of the track at Olympia in Greece, but the site has been identified using geophysics, and there are multiple ancient texts describing the proceedings.

As extreme sport goes, the chariot races could not have been more dangerous. Accidents were frequent and fatalities of both human and horse were common. In fact, even the recreation of the chariot race in the original 1925 version of the movie Ben Hur became notorious for the cruelty involved, allegedly costing up to 100 horses their lives.

When the movie was remade in 1959, 75 mainly Lippizaners were specially trained for nearly four months, with the two human stars, Charlton Heston and Stephen Boyd, spending almost as long learning to drive them. A further remake was issued in 2016, but most of the chariot race footage was computer generated, with driving legend Boyd Exell providing the real life shots.

The reward for putting your life on the line in ancient times? Questionable at best. Despite the risk they took to compete, it was the owners of the horse teams that were announced as the winners. The chariot driver was reliant on the generosity (or not!) of the owner for their reward.

Riding events at the ancient Games came a little later. They were more reminiscent of today’s horse racing, except that the riders had no stirrups and only a pad as a saddle. They competed over a shortened course of six miles.

When the Olympics were restarted in the modern era, 1896, horse sports were not initially included. They appeared in 1900, where the disciplines included polo, as well as a high jump contest. The three disciplines as we know them today—dressage, eventing and show jumping—did not come about until 1912, although all three would be almost unrecognisable to 21st century aficionados.

Show jumping had complicated rules with different amounts of faults being awarded for hitting a fence with a front or a hind foot. Dressage included a jumping phase, and eventing did not have dressage at all! Only men could compete, and they had to be existing or former officers in the armed forces to be eligible. It was 1964 before women were involved in all three sports at Olympic level, which coincidentally, was the last time Tokyo hosted the Games.

Until recently, eventing was the only Olympic sport where both team and individual medals were decided in one competition. It was after continued objections from other sports, that, in 2016, a second round of stadium jumping was added for the top 20 individuals to decide the individual medals.

The Olympic Games was also responsible for the most seismic eventing change: dropping a large part of the endurance phase, the roads and tracks and the steeplechase. Athens 2004 was the first time so called ‘short format’ eventing was held but it has since become the recognised format throughout the sport for championship events. This change, although a difficult one for the purists to accept at the time, made a huge difference to the cost of holding eventing competitions and significantly assisted in keeping the sport’s Olympic status.

Dressage and show jumping have got off more lightly as changes go. The jumping rules were modified after World War 2, when some of the competing officers were imprisoned together and worked out a simpler version of four faults for a pole down and three for a refusal. Although the latter rule was amended a few years ago, showjumping has remained very much as it was then.

Dressage got a new look in 1996 in Atlanta, when the Freestyle was introduced at the last round. Previously, the most significant change to the competition was the introduction of piaffe and passage to the required movements in 1932!

In the last few renewals, changes made have been primarily driven by the need to keep equestrian in the Olympic Games, with reductions in the required amount of riders to form teams being the most significant. Smaller teams have two advantages in Olympic eyes; they reduce the cost (less horses to travel and keep) and they promote inclusion (more nations can find and fund an entire team).

Some of these changes have been much debated but as the current interest shows, horses in the Games are as much enjoyed now as they were 2000 years ago.