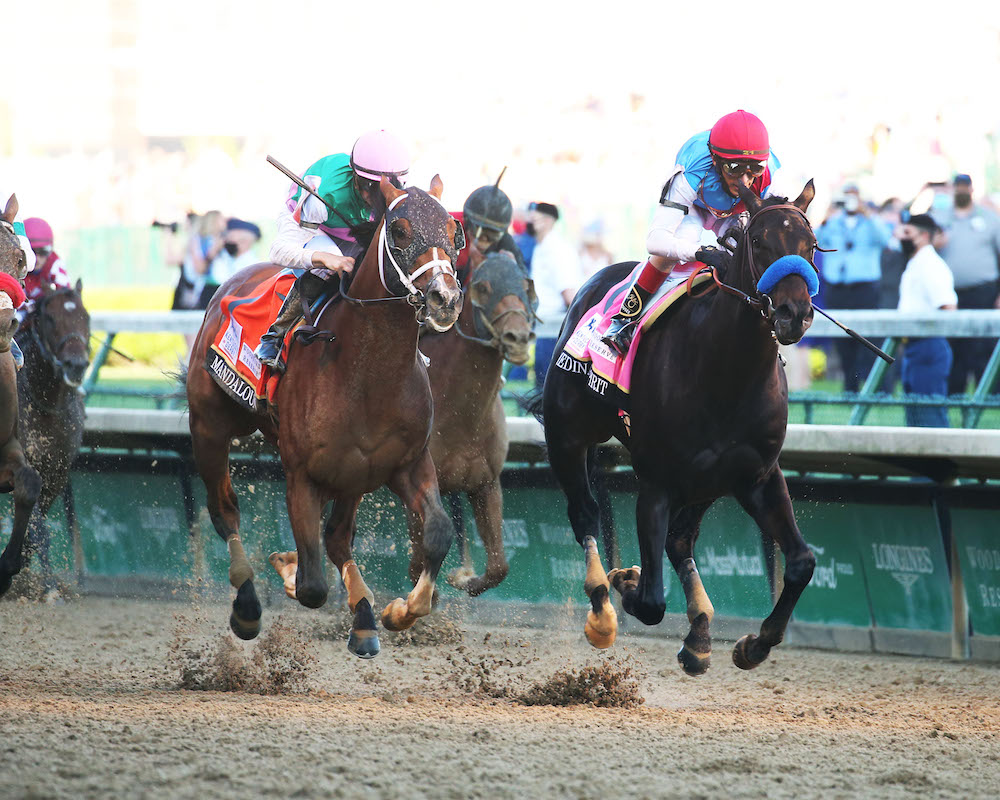 Soooo, a guy walks into an airport…

Following the first running of the Saudi Cup in Riyadh, horse owner Amr Zedan was awaiting a flight to Dubai when he met Bob Baffert.

The two got to chatting and Zedan says: “Well, I’m getting back into the game. Maybe we’ll get together and win the (Kentucky) Derby.” To which the five-time winner (at that time) thinks, “Yeah, right.”

An owner’s dream and a trainer’s, a jockey’s and a team’s skill all came together earlier today when a $35,000 purchase, Medina Spirit, rose to the heights of the American racing world to win the 147th running of the Kentucky Derby at Churchill Downs.

“This is one of my biggest Derby wins,” said Baffert in the post-race press conference, after snaring a record-setting seventh Derby score. “Usually, I come in here with these heavy-duty horses. This year, I really enjoyed myself. I came in here under the radar and thought, ‘Well, maybe he’ll get a piece of it.’

“But they find this little horse,” says Baffert, “and it’s a Cinderella story.”

With three wins and an equal number of places in his six races, Florida-bred Medina Spirit was an initial $1,000 purchase at the Ocala Breeders’ Sale in 2019 and a $35,000 purchase in the following year’s premier sale.

“He doesn’t pay attention to what we paid for him,” said Baffert. “This happened with Real Quiet (Kentucky Derby and Preakness winner, 1998) because he only cost $17,000. Real Quiet never got the respect because they looked at the price.”

The little horse that could would go on and do. A winner of two and a placer in three graded stakes, the son of Protonico (out of Mongolian Changa, by Brilliant Speed) has risen to the heights of American horse racing with one determined effort.

“I never imagined last night I was going to be sitting here,” said the obviously surprised trainer. “I was surrounded by great, great people—one of the exercise riders was crying, crying in the Winner’s Circle.”

“This is just such a thrilling win for this little horse,” said Baffert, seeming to recall his earlier, unexpected Derby winners. “He’s got so much of Silver Charm in him (Kentucky Derby and Preakness winner, 1997). He’s a fighter.”

Speaking of how the race progressed, Baffert said: “I kept waiting for the other horses (Mandaloun, Hot Rod Charlie, Essential Quality) to pass him. But when he got to the eighth pole, I thought: ‘Well, this horse has a shot.’”

Entrusted to Baffert on the strength of an airport conversation and Baffert’s stable team, he won the Robert Lewis Stakes (G3) at Santa Anita and entered a confusing Derby field square in the middle of the pack with 74 points. Derby favorite Essential Quality had 140.

Owner Zedan was poetic in his praise of Baffert, who captured a record-setting seventh Kentucky Derby win.

“When you work with Bob—a lot of people at their job, it’s just mechanical,” said the thrilled owner of the newest Derby winner. “With Bob, it’s an art. It’s like Michelangelo, Pablo Picasso. With Bob, you are just witnessing art in motion.”

Of his horse, Zedan added, “This is really surreal. I knew he had a heart bigger than his body.”

Piloted by 2020 Derby winner (on Authentic) and now four-time Derby-winning jockey Johnny Velazquez, Medina Spirit was well-drawn in post position 8. It was thought Velazquez would follow the same tactic and go for the lead as he did from an outside post on Authentic. Medina Spirit broke well, captured the lead and never relinquished it in what was a fast-paced 2:01.02 race.

“I liked this little horse, he’s all heart,” said Velazquez in the post-race interview. “The strategy was simple: break out into the lead and if someone wants to go faster, let him have it. I knew he was faster than the rest of the horses and especially how he breaks out of the gate. I rode him twice before and I knew he was a fighter…he showed up today.”

But not without a fight.

Favorite Essential Quality was known to have had some work to do, breaking from gate 14 in the 19-horse field (following the scratch of King Fury). He broke well, but not well enough to avoid being collided into by Rock Your World, breaking from the 15 gate.

Essential Quality recovered to recapture a stalking place in sixth position while Rock Your World’s run was effectively ended. But Essential Quality would be on the outside of the three top finishers and have the longest trip, though finishing just off the winner by a length.

It is the first loss in the Eclipse Award-winning Two-Year-Old Champion’s career and adds to the decades long-denied attempts of Godolphin and owner Sheikh Mohammed bin Rashid Al Maktoum to win the race.

The victory caps off a spectacular weekend for Velazquez, who won Friday’s “Lilies For The Fillies” Kentucky Oaks aboard Shadwell Stable’s Malathaat. He becomes the first jockey to win the Oaks and the Derby on the same weekend since Calvin Borel (2009).

Speaking about his fourth Derby victory, Velazquez was pensive. “This opportunity doesn’t come for a man like me at this age (49), so I’m very grateful and very thankful. That’s what keeps me hungry. I think I do a good job.”

He continued: “We can’t do anything without the horses. We can think, we can plan, but the horses have to help you. We plan and anticipate things, but I’m only the pilot; the horse has to do the rest and it worked out.”

“I’m like Johnny, I’m getting older,” said the Hall Of Fame and all-time leading Derby-winning trainer. “And you get older and that window starts closing, and it’s tougher, and I’ve got my wife Jill supporting me. By the way, she won a race today (Du Jour, The American Turf). What she has to go through for my ups and downs, the highs and lows—for her horse to win was like the greatest feeling. She felt like Amr felt winning the Derby.”

Asked if he’ll keep trying to add to his historic Derby-winning record, Baffert concluded: “I’m ready for that punch to the gut. As long as they still want us, we’re gonna stay in there.”

Derby Day at Churchill Downs seemed a bit more normal. Though reduced to 60 percent capacity with media limitations and COVID protections in place, attendees seemed in a Derby-day mood in their usual finery under blue skies.

Unlike the September 2020 COVID-delayed Derby, no protesters greeted attendees and the event began with its traditional live rendering of Stephen Foster’s “My Old Kentucky Home,” played by the University of Louisville band.

And, as is traditional, tears flowed at the playing of the traditional tune, perhaps foretelling a return to normal for the 148th running of the Kentucky Derby in 2022.

Baffert seemed to sum up the mood of the 41,000-plus attendees as Derby day sought its way back to normalcy: “It was so exciting. I haven’t been this excited in a long time.”