Everything You Need to Know About the U.S. Olympic Eventing Team (to Sound Informed)

Home > Blog > Olympics > Everything You Need to Know About the U.S. Olympic Eventing Team (to Sound Informed) 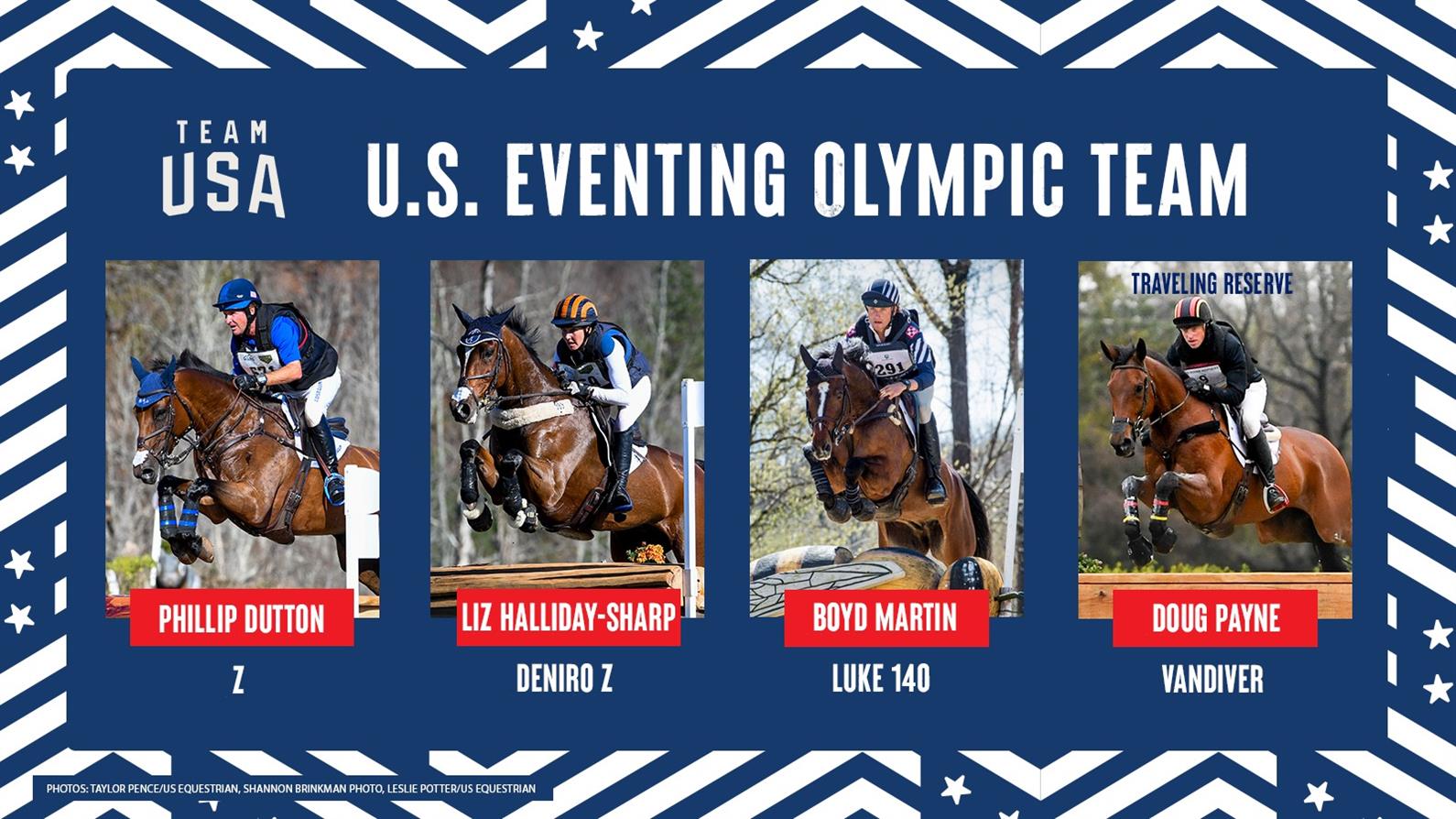 US Equestrian has revealed the four athletes that will travel to Tokyo this summer to represent the United States in Olympic eventing competition.

Three athletes will compete as a team with one traveling reserve as a part of the new Olympic format announced in 2019. While there will no longer be a drop score, substitutions will be allowed under certain specified circumstances. The group will be headed by Chef d’Equipe Erik Duvander and Team Leader Jenni Autry.

Dutton’s mount Z, a 13-year-old Zangersheide gelding, has championship experience, representing Team USA at the 2018 World Equestrian Games in Tryon, NC. The bay has been remarkably consistent over the course of the last year, with three runner-up finishes in CCI4* competition since Sept. 2020, in both long and short formats. This pair is fresh off a top 10 finish at the CCI5*-L Land Rover Kentucky Three-Day Event.

In Dutton’s last Olympic outing, he rode to individual bronze with an inspiring performance aboard the hard-trying Mighty Nice at Rio 2016.

Another well-established championship veteran, Boyd Martin was a clear-cut favorite to make this team. Martin has competed in two Olympic Games and seeks his first medal. He will compete the 10-year-old Holsteiner gelding Luke 140 in Tokyo, who is coming off a stellar win at CCI4*-L Jersey Fresh, which served as a team selection trial.

Luke 140 also won the CCI4*-L at Galway Downs in California last October, but the young and talented horse has yet to compete at the five-star level. Keep in mind that the new format has defined the “Olympic level” as having four-star dressage and show jumping and a 10-minute, 45-effort cross-country course at the three-star level.

Martin has a tremendous string of horses at the moment; he was also named first and second direct reserve with Tsetserleg TSF and On Cue, respectively. On Cue was the 2021 USEF National CCI5*-L Champion at the Land Rover Kentucky Three-Day Event in April.

If Liz Halliday-Sharp was not named to Team USA’s lineup for Tokyo, this writer might have thrown a mutiny. Halliday-Sharp has unquestionably earned her place on this team with a career-best season.

Related reading: “Liz Halliday Sharp: “There’s nothing more that I want right now than to go to Tokyo”

When competition resumed last year following the temporary halt to the competition calendar due to the ongoing global pandemic, Halliday-Sharp came out positively on fire. She won a remarkable eight FEI events between July and November 2020 with multiple horses. Deniro Z won at CCI4*-S Great Meadow International and CCI4*-S Plantation Horse Trials in 2020 and has not finished outside of the top 10 in CCI4* or CCI5* competition in 2021. Tokyo will mark Halliday-Sharp’s first championship appearance.

Payne contributed to a team gold medal at the 2019 Pan American Games in Lima, Peru. He has been named Team USA’s traveling reserve with the 17-year-old Trakehner gelding, Vandiver. This pair took the win in CCI4*-S competition at The Fork at TIEC in April and finished 12th at CCI5*-L Land Rover Kentucky.

The six team alternates are as follows:

Third Alternate: Will Coleman and Off The Record

Olympic eventing competition kicks off July 30 and continues through August 2, 2021 at Tokyo’s Equestrian Park (dressage and show jumping) and Sea Forest Cross-Country Course venues. Before heading overseas, however, the team will contest a Mandatory Outing at Great Meadow in Virginia in early July.

“I believe we have a competitive team to represent the U.S. in Tokyo,” Duvander said. “[After Great Meadow], we travel to our Pre-Export Quarantine in Aachen, Germany. This is a great facility and will function as our final training camp where we will be working with dressage judges and have Peter Wylde working with us on the show jumping. This is a very focused group of athletes who are committed to delivering a top performance in Tokyo.”