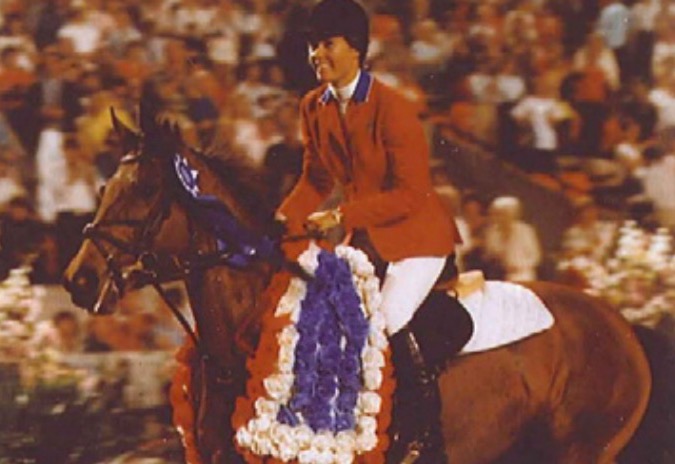 For The Moment became one of the most successful American Thoroughbreds ever to compete, more than holding his own against the top European Warmbloods.

He was an undistinguished bay gelding in 1981 when decorated show jumper Lisa Jacquin partnered with him as a temporary “project” until something better came along. She was unimpressed at first.

“Fred,” as he became known in the barn, was difficult, but Jacquin persevered and eventually decided to keep him. She entered Fred in his first major event in September of 1983 and won, and one of the most exciting show jumping careers on the grand prix circuit was born.

In 1987, For The Moment, with Jacquin in the irons, helped the U.S. to a team Silver Medal at the Pan American Games in Indianapolis, won a then-record six grand prix events, including the coveted Budweiser American Invitational in Tampa, FL, and placed third in the FEI World Cup Final in Paris, France.

The highlight of his career came the next year when For The Moment and Jacquin helped the U.S. win the team Silver Medal at the 1988 Olympic Games in Seoul, Korea. In 1991, For The Moment was the AGA Horse of the Year and a year later, he and Jacquin earned a place on a second U.S. Olympic Team, this time in Barcelona, Spain. In 1994, Fred was again the AGA Horse of the Year.

The following year, at the age of 21, he became the oldest horse ever to win a show jumping grand prix when he won the Budweiser Show Jumping Championship in Wellington, FL.