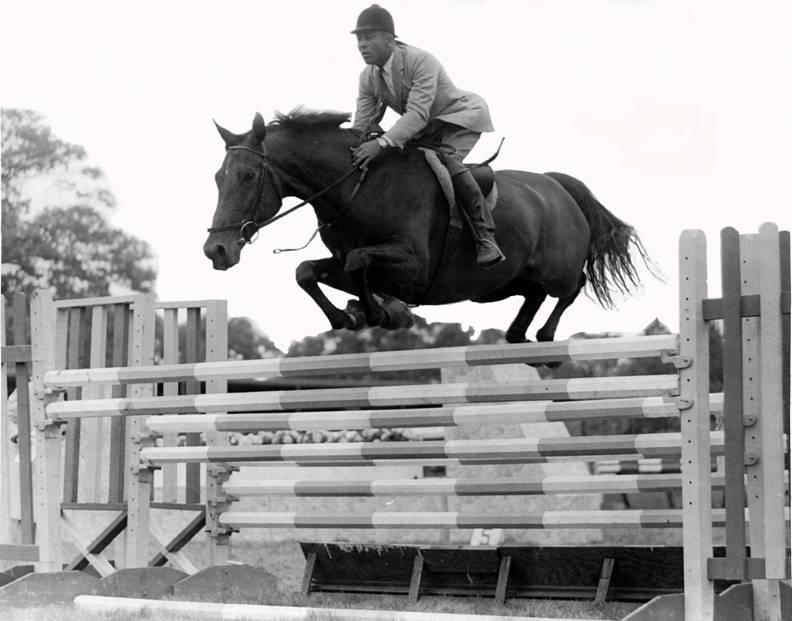 Charles “Sonny” Brooks, by far the most prominent black show jumper of his era, overcame color barriers as readily as big jumper fences.

During the 1950s and ‘6os, Brooks was everybody’s show favorite, widely respected for his sympathetic, highly personal riding style and unusual ability to cope with green and difficult horses. His pleasant nature helped him win friends as readily as show-ring victories.

Brooks grew up in Bridgeport, CT, not far from the Fairfield County Hunt Club where his father, Charlie, ran the stables. He started riding at age ten under his father’s supervision and soon caught the eye of Hall of Fame show jumper “Cappy” Smith, who was stabled nearby. Brooks made rapid progress with Smith’s tutelage, and when the latter moved to Middleburg, VA, he invited Brooks to join him.

When Brooks returned to Connecticut, he reconnected with Hall of Famer Bill Steinkraus, another Smith protege. Steinkraus was juggling a job in New York with riding a string of Arthur Nardin’s jumpers on weekends and needed someone to keep his horses going during the week. He got Brooks to perform this task and when Steinkraus made the 1952 Olympic Team, he persuaded Nardin to engage Sonny to take over showing the string, riding such top horses as Trader Bedford and Trader Horn.

Brooks went on to ride for several other of the East Coast’s best stables including those of Frank Imperatore, Bernie Mann, Jay Golding, the Dunn Brothers and Norman Coates’s Volco Stables.

In 1953, Brooks earned the most wins in the history of Piping Rock’s Jumper division en route to the Jumper Championship on Ping Pong. In 1954 he brought the dynamic Riviera Mann onto the sport page headlines. It began with a Reserve Championship at Brookville and a Championship at Piping Rock. By the end of the year, Brooks had netted at least a dozen titles with Riviera Mann, including the jumper crowns at Fairfield, Ox Ridge, Boulder Brook and Oaks Hunt in Manhasset, Long Island.

Perhaps Brooks’s most memorable victory came in 1961 when he won the National Horse Show’s Open Jumper Championship on Frank lmperatore’s Grey Aero, beating three of the greatest combinations of the day—Al Fiore on Riviera Wonder, Dave Kelley on Windsor Castle, and Harry deLeyer on Snowman. In 1964 he returned to the Garden with Grey Aero and won the Open Stake.

In the late 1960s Brooks started to encounter some serious physical problems. He spent some time in California, and then rode briefly but successfully for the Canadiana Horse Training Center in Quebec before his untimely death.