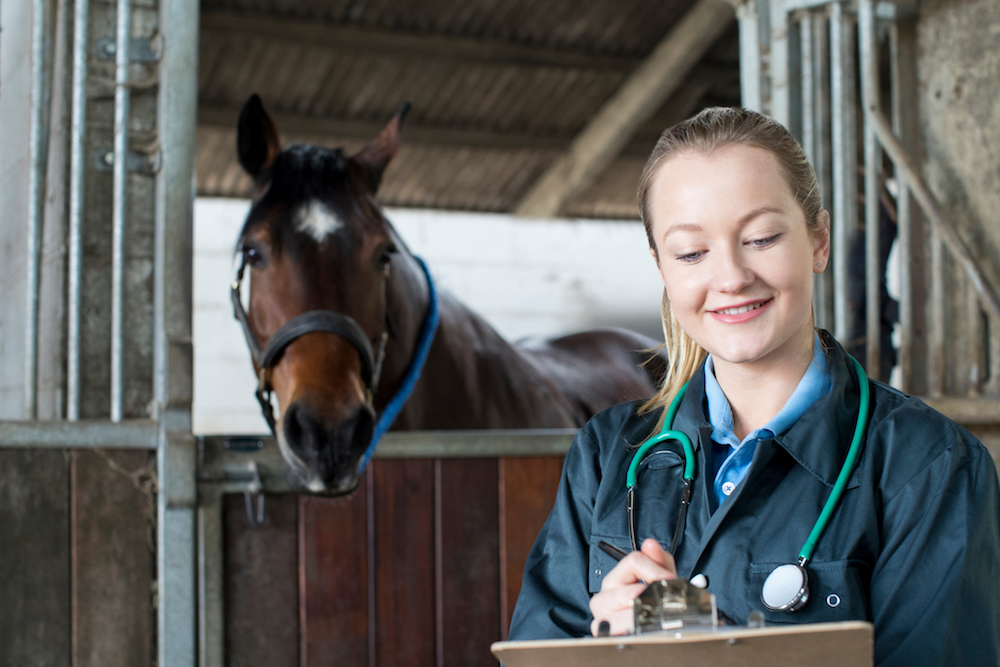 I ran across a thought-provoking article in the November 2014 edition of the human medical journal, Pediatrics.

ASIDE: Yes, I have other things to do.

The article is called, “Overdiagnosis: How our compulsion for diagnosis may be harming our children.” You can read the whole thing, if you are so inclined (it’s free). I think that overdiagnosis is a growing problem with horse medicine, and it’s mentioned more and more frequently in human medicine. Otherwise stated, just because a doctor can make—or try to make—a diagnosis doesn’t mean that a diagnosis is always necessary.

Here’s what got me thinking.

The parallels between pediatric medicine and veterinary medicine—in this case, equine medicine, of course—are pretty obvious. For one, you probably already know someone who thinks of his or her horse as if it were his child. (WARNING: It could be you). But there many more similarities, as well. Here are just a few.

Anyway, much like the responsibilities that parents have for their children, it’s the responsibility, concern, and caring for a horse by its owner that drives most of the decisions that are made on their behalf.

Now, before we get any farther, I want to go on record that I am all for trying to come up with a diagnosis when a horse has a problem. It’s probably pretty obvious to say this, but it’s a lot easier to treat something when you know what that something is. That said, coming up with an exact diagnosis isn’t always the easiest thing to do, and—here’s where it ties into the article—it’s not always necessary. Furthermore, it can sometimes cause all sorts of harm.

Sometimes, no doubt, a precise diagnosis is important. Say your horse has a case of colic (I hope it never happens). An abdominal ultrasound in a horse with colic is usually very accurate at helping to make the decision of whether or not a horse needs surgery. Abdominal ultrasound can, on the one hand, save a horse from surgery, or, on the other, indicate the surgery is immediately needed. Here, a quick, reliable, precise diagnosis is a really good thing.

On the other hand, most horses with abdominal pain (colic) get better without surgery. So, odds are, an ultrasound won’t give you much in the way of useful information unless there are other signs indicating that the colic is serious. The cost is certain—the benefit from the additional diagnostic test often isn’t.

Sometimes a precise diagnosis isn’t really needed. Say a 20-year-old horse has osteoarthritis of the pastern—the common name for that condition is “ringbone,” so-called because of the “ring” of bone that forms around the pastern. In many cases, it’s quite obvious—you can see it from across the barn aisle, if you know what you’re looking for. And it’s a condition that shows up quite obviously on X-rays, too.

But in some cases, taking X-rays, while it helps confirm a diagnosis, just adds an unnecessary layer of expense, because the X-rays don’t really change what you’re going to do anyway.

“Overdiagnosis” describes a situation when an abnormality is found, but detection of that abnormality doesn’t actually benefit the patient. In equine medicine, veterinarians have added a lot of new technology to help make diagnoses—and a lot of new treatments, too—to try to help resolve various conditions. But, as our ability to make diagnoses increases, it doesn’t always benefit the horse, or the owner. In fact, trying really hard to always come up with a diagnosis can even cause harm.

What harms? Let’s look at three, from the Pediatrics article.

1. Physical Effects. While direct harm from diagnostic testing isn’t a big problem in horses—that is, severe complications aren’t that common—they do occur. So, for example, if you want to get an MRI for your horse, he’ll often have to undergo general anesthesia. That’s a risk to the horse, even though it’s not such a big risk that you would never want to do it. But one does have to weigh the risks and benefits of any procedure. It’s ok for a procedure to carry some risk, but you want the benefit to outweigh the risk. Overdiagnosis exposes horses to additional risk, but doesn’t always result in additional benefit to the horse or the horse owner.

2. Psychological Effects. A diagnosis can change a person’s perceptions of illness. That’s not always a good thing. The horse that has a little limp at the trot, but still happily goes out on the trail can become a “cripple” or a “problem” once he’s diagnosed with osteoarthritis. And once someone has a diagnosis to pursue, he or she can become bound and determined to “fix” it, and even become transfixed by worry.

For owners, the search for a diagnosis can sometimes be a big trap. All of a sudden, the horse that was doing just fine—maybe with a little bit of a pain reliever from time to time—needs supplements, injections, “adjustments,” or any number of other treatments. The horse that is not performing to an owner’s expectations becomes a money pit as one test after another gets recommended. The horse that was a reliable companion now becomes a worry, and an expensive one, at that.

3. Financial Strain. Keeping horses costs money, and so does caring for them. I don’t think there’s any reason to spend extra money for services that may not really help your horse much in the long run. So, for example, if you have a horse that has been diagnosed with a tendon strain, ultrasound, while it is likely to be able to tell you exactly how serious the injury is, may not be all that important if you are willing to take a good amount of time, and do a controlled rehabilitation program.

Similarly, if your horse is not too lame, you might be able to just wait the problem out.

In both examples, you won’t know exactly what the problem is, but spending additional money on tests may not make much difference in how things turn out. It is possible to provide excellent care for your house and still keep something in your bank account. Medical cost containment is a much discussed issue in human medicine, but it’s rarely discussed—much less studied—in veterinary medicine. To be honest, I’m not even sure that it’s even much of a concern.

What are some of the possible reasons for overdiagnosis?

Defensiveness. Defensive medicine took hold in human medicine primarily because there are legal consequences when doctors miss diagnoses. The thought was, it was better to waste money on needless tests for the many than to possibly miss some obscure diagnosis in the few: a CYA* sort of thing. But the fact is that defensive medicine is demonstrably a waste of time and money, and those are two things that most people don’t have enough of.

Industry Influence. It’s just a fact that industry sponsorship influences professional and prescribing activities. This isn’t just “big pharma”—a veterinarian is influenced to do a test by the training and support he or she receives. A diagnostic test is only good if it’s likely to come up with a useful result, not just because its available.

Incentives. As I wrote in a recent article, I don’t think that most people who try to care for horses are in it for the money. But the fact is that when you’ve bought an expensive piece of diagnostic equipment, it needs to get paid for. A hospital has a staff and supplies and utilities, etc., and the bills have to get taken care of. Thus, there’s sometimes a financial incentive to overdiagnose. Otherwise stated, the more you do, the more you get paid.

There are incentives on the part of horse owners, too. A diagnosis is a very powerful psychological weapon.

Psyche. Many people are not very tolerant of uncertainty. These folks want to know, or at least they want a reason. And that’s all well and good, but there’s a cost for all that.

ASIDE: I remember reading All Creatures Great and Small way back before I got into veterinary school. In it, the author, James Herriot (pen name for the late James Alfred Wight), was told by his employer to give every condition a name. “Call it McCluskey’s disease,” Herriot was told.

Giving something a name empowers the person doing the treatment to a certain degree. A diagnosis can be like a badge of honor.

“My horse is insulin resistant,” someone might say about his or her overweight horse, having been told of a horse’s high insulin levels. Now armed with the diagnosis, the search can begin for chromium and cinnamon and low-starch feed and any number of (mostly worthless) supplements. But, in fact, a few simple management changes for an easy keeper can often take care of the problem, at a much lower cost, and without a precise diagnosis. You may not HAVE to know.

Look, I pursue a diagnosis for horse medical conditions just about every day. But I’ve also managed plenty of horses conservatively, assuring owners that the problem doesn’t seem to be too serious, and waiting with them for the successful resolution that usually comes with not-so-serious problems.

There’s usually more than one way to go after any problem when it comes to diagnosing and treating horses. Equine medicine is all about—or it should be all about—working together to try to find out what’s best for the horse and the horse’s owner, not necessarily about running every last test.

BOTTOM LINE? You should ask about the benefit to be gained from a test before agreeing to pay for it.

The Pediatrics article challenges a lot of assumptions that veterinarians and horse owners have gotten used to making. For example, while everyone talks about how early detection and diagnosis is always a good idea, that’s not necessarily the case, because many times conditions improve on their own. The drive to find an “exact” diagnosis doesn’t necessarily improve the horse’s health or outcome.

Everyone needs to be humble, and work in the best interest of both the horse and the horse owner. More and more screening and diagnosing may not always be the best thing, for horse or human. And sometimes it’s not just your horse that’s being targeted by overdiagnosis—it’s also your wallet.

Sometimes the hardest thing to do for your horse is nothing. The hardest diagnosis to make—and sometimes, for owners to take—is “He’ll be fine, you don’t need to do anything else.”