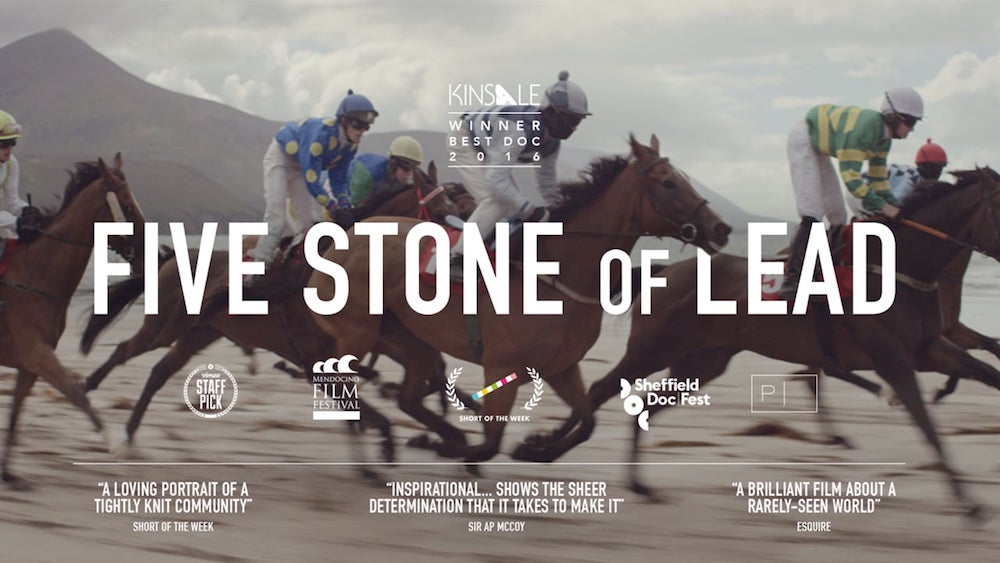 From the Black Stallion to Secretariat, Hidalgo to Seabiscuit, horse racing and film are often a perfect match.

One reason for this, of course, is speed. A very tiny percentage of the population will ever feel a horse gallop underneath them, and fewer still will experience the heart thumping break from the starting gate and thunder of the race track. At the movies, however, we can all feel the adrenaline pound in our chests, even if it is second hand.

Another reason is that the arc of the story is already made. Characters decide to enter the race; they train for the big day, run the race, win or lose. Even if the formula tends to be the same, what different filmmakers do with it is limitless.

So, after Authentic’s underdog win in the 2020 Kentucky Derby, here are four inspiring racing documentaries on Equus Film Channel to tie you over until the Preakness.

On the wind-swept beaches of Glenbeigh, racehorses thunder down a track of sand and surf and seaweed. On their backs, boys as young as 12 fearlessly jockey them, tiny silks, weighted saddles and all.

Dylan is one of these jockeys. He is so light that he must have 70 pounds of lead in his saddle to make him heavy enough to ride the big horses. Dylan may be small, but he is mighty. As the audience watches, Dylan trains, he runs, boxes, and practices on a dummy horse with a tenacity that far exceeds his years. This little short uses every second of its five minutes and thirty seconds with precision and beauty.

Following one Germany’s most successful jockeys of all time, Andrasch Starke, The Jockey has some of the most beautiful horse racing photography out there. Filmed in the glory of German fall as the colors change and the light dances across the track, there is an added color and dynamic feel to the film that makes me almost grateful that the Triple Crown is run in the fall this year.

Andrasch himself narrates the film, explaining his days’ structure, deep friendships with other jockeys, and his love of horses.

Johnston Racing Then and Now

When Mark Johnston, successful vet turned horse trainer, and his wife Dierdre started Johnston racing in 1987, it was not the gorgeous, high tech, beautifully managed operation it is today. It was a ramshackle. Mark had to train his first horses on a windy and often soggy beach and only after, as one former rider for Mark notes, the British military that used the same beach for training had cleared out for the day.

Now, Johnston racing has over 4,0000 wins in British thoroughbred racing to it is named. This 33-minute documentary shows the satisfying transformation of the facility and the trainer from underdog to legend. Not only does it tell a good story, but the lovely drone footage of the training grounds and the barn will make any horse lover swoon.

While most Americans have heard of the Triple crown, racing is much bigger than those three events. For example, the country’s biggest stakes race is in Charles Town, West Virginia, with a prize of $500,000.

Halter Off is the story of Angelo Jackson, a struggling trainer who enters a horse in the Charles Town race, hoping that the winnings will keep his barn open for another year. Halter Off is the dazzling gray thoroughbred Angelo has placed his dream on, and the two have a deep connection that is captured on-screen with nuance and subtlety.

While the film might be restrained in all the right places, Angelo’s life has not been. The documentary recounts Angelo’s fiery personality and troubled past. He also swears like a sailor. Nevertheless, he also possesses a quiet sweetness with each of his horses.