Unbridled: Discovering a Horse of a Lifetime 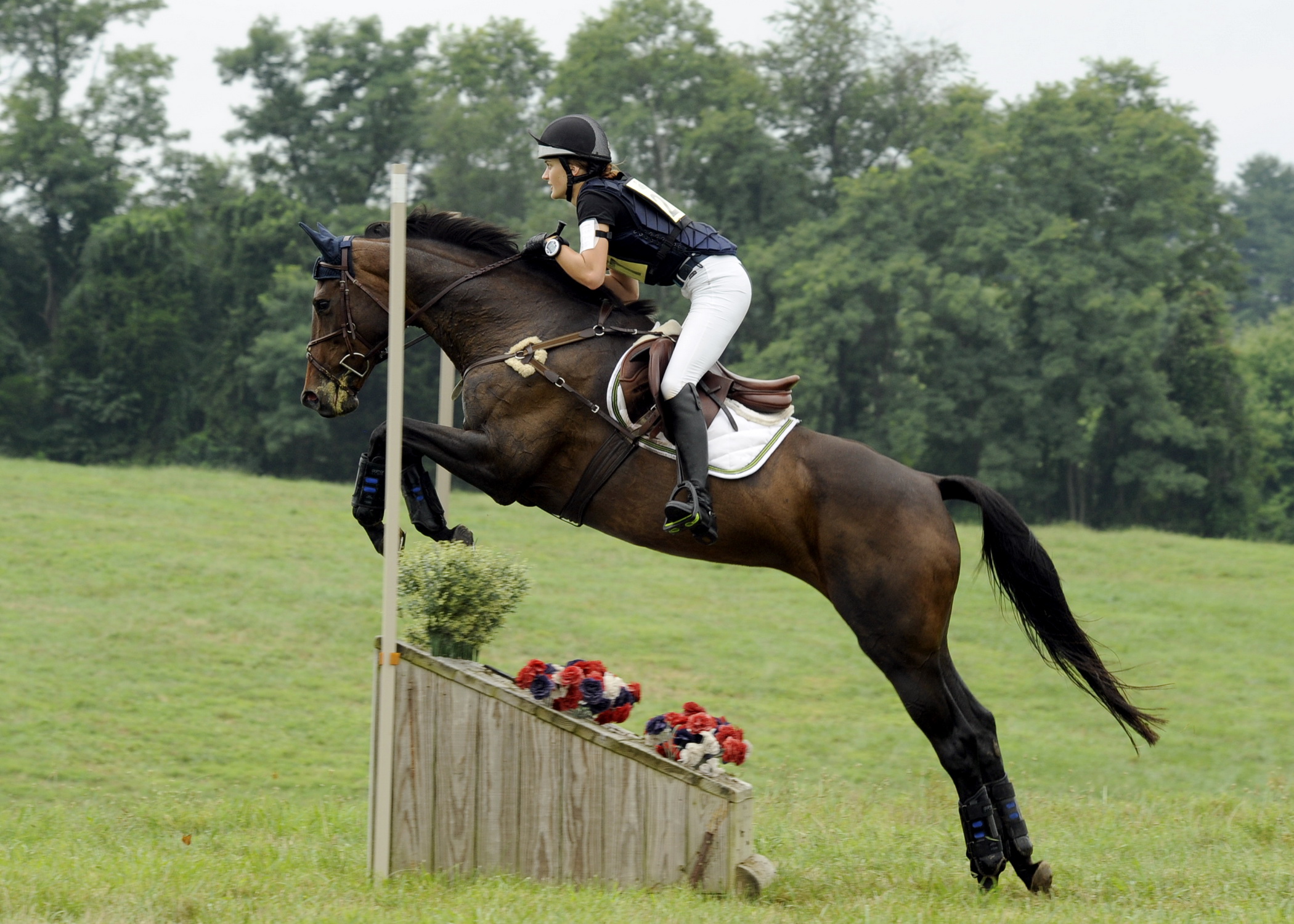 Seven years ago, Larisa Quirk was feeling frustrated and disheartened with her recently adopted mare, Starbucks.

The spicy Thoroughbred had a taste for speed, and Larisa’s plans to point her to the hunter ring weren’t panning out. The 11-year-old mare was incredibly strong-willed and athletic. Larisa wasn’t sure what the future held for them.

But when she was reminded why she fell in love with the horse she discovered at Days End Farm Horse Rescue (DEFHR), a local equine rehabilitation and rescue facility in Woodbine, MD, a dramatic shift occurred. Learning to let go of her preconceived plans opened the door to possibilities she had never imagined.

The revelation came one evening when Larisa decided to take Starbucks out for a hack through the rolling green hills near the family’s farm in Laytonsville, Maryland. They both needed an opportunity to clear their heads with a change of scenery. Larisa struggled to control the mare in a slower canter. Instead of wrestling against Starbucks, she loosened her grip and closed her leg.

“Her ears instantly pricked forward and her stride lengthened into a full gallop,” she remembered, truly understanding her mare for the first time in that moment.

“I will never forget that feeling. I was crying and laughing all at once—absolutely bursting with joy—and so was she.”

When Starbucks arrived at DEFHR in 2011 as a neglect case, she was emaciated, scoring a one out of nine on the Henneke Body Condition Scale—the lowest possible score—and suffered from severe dental neglect, dermatitis, and rain rot. The plain bay leggy mare was well into the rehabilitation process when Larisa first met her.

“During my time volunteering, I met a few horses that I really liked, but Starbucks was the first one I truly fell in love with,” Larisa said, who started volunteering at DEFHR as soon as she was old enough. Larisa’s older sister, Katie Dyer, works at the rescue.

At the time of that first meeting, Starbucks was battling a painful abscessed tooth and was reluctant to eat. While the mare awaited treatment, Larisa was asked to groom her during feeding time.

“I decided to try hand-feeding her the mash that was prepared for her,” she recalled. “To my surprise, she started taking mouthful after mouthful and ended up almost finishing her three pounds of watered-down grain. I, being 13 at the time, was convinced it was definitely the start of a wonderful partnership.”

When Starbucks was healthy and strong enough, she began her training with DEFHR’s head trainer, Sara Strauss.

“During her early days of training, I remember her being very attached to the other horses and anxious under saddle,” recalled Sara, who worked with the mare to overcome her issues. “We did discover her love for jumping and she loved cross-country schooling.”

In fact, the mare frequently showed off her athleticism by leaping out of her field at DEFHR.

By the time Starbucks was ready to begin her new life, Larisa had grown firmly attached—her family cemented their partnership by officially adopting her.

“Sara made the whole adoption process so welcoming,” said Larisa. “Every question was answered with as much detail as she could provide. It was pretty seamless.”

With over 2,500 horses adopted out throughout their 30-year history, DEFHR has a reputation for working to provide the best matches possible.

Larisa was a teenager when her family adopted the mare from DEHFR, but she was not a green rider by anyone’s definition. She rode in the hunter and equitation divisions as a junior and eventually competed on a National Capital Equitation League (NCEL) team. However, her partnership with Starbucks was shaky at first, as they struggled to get to know each other.

“When we first brought Starbucks home, she was hot-headed, opinionated, and very herd bound,” said Larisa. “Standing still under saddle wouldn’t last more than two seconds. It felt like she was trying to pull my arms out most of the time.”

It became apparent that Starbucks had little desire for the hunter ring. Group lessons and schooling shows made her anxious and reactive. Larisa’s trainer at the time told her that the mare would never be a good riding horse because of her “crazy” and “aggressive” attitude.

But Larisa didn’t see it that way.

She kept remembering that connection she felt when Starbucks ate from a bucket in her arms. What others considered flaws, she embraced as unique personality traits.

It wasn’t until that enlightening gallop in the field, however, that things clicked. Larisa realized she had found Starbucks’ true calling and changed her training program to better suit the mare’s natural talents. Soon they were successfully competing in eventing and experimenting in other disciplines as well.

They began to share a special trust, one that allowed Larisa to understand and develop Starbucks’ sensitivity enough to try bridleless training.

“I was shocked at how responsive she was to my seat at the walk, trot, and canter,” she said. “I just put a lead rope around her and popped over a grid several times. Since then, I think our [jumping] record brideless is 4’3″.”

As many mare lovers can attest to, Starbucks’ sensitivity under saddle also translates to her unique character and bond with her owner.

“She can be quite stoic and disinterested with a lot of people, but she has a huge personality around me,” Larisa said. “I get a lot of dirty looks tacking her up and she always walks to the other end of the field when she sees me coming. But she’ll also dig in my pockets for carrots, give ‘kisses,’ and press her head against my chest after a good long ride.”

Over the years, Starbucks has given Larisa the chance to experience many firsts in her riding career: her first time galloping around the historic Pimlico Racetrack, doing dressage, eventing through Preliminary, foxhunting (though Starbucks hated it), jumping 4’6″, riding bridleless, and riding and jumping side saddle.

The duo has performed demonstrations at the Pennsylvania World Horse Expo, a wedding, and at Days End’s Fall Festival.

“She may not be winning upper-level events,” Larisa said, “but she’s definitely winning at life. I could not possibly ask for a better heart horse and partner in crime.”

The pair still manages to find a competition win here and there. When they do, it reminds Larisa of that moment on the hills in Laytonsville. The moment she learned to see what others considered flaws as one-of-a-kind traits. Traits that, when accepted and appreciated, create a horse of a lifetime.

“My favorite competition memory was being the only pair in our division to finish on our dressage score at our first Training level event,” Larisa said. “It was also our first ever recognized event. I was in tears crossing the finish line on cross-country. That happens a lot,” she laughed.

The pair’s special relationship is clear to those who watch them work together.

“I am always blown away at the connection that Larisa and Starbucks display in the videos, pictures, and updates that I see,” Sara said. “Every year they come to DEFHR’s annual Fall Festival and wow the crowds with their bridleless jumping demonstrations. Larisa brought the shine out in that mare because she saw what she could be.”

Though Larisa has put in an immense amount of hard work to develop her partnership with Starbucks, she’s quick to point out that their journey together has not been alone.

“I am blessed with parents, two sisters, and many friends that have given us unlimited support each day. I’d like to give a huge thank you to the wonderful Robert Taylor, MFH of Goshen Hounds, for all his guidance stepping into the eventing world, and also to my phenomenal dressage trainer, Carolyn Del Grosso, for sharing her wisdom and being with us every step of the way. Truly, it takes a village.”

Over the past three decades, Days End Farm Horse Rescue has been renowned for working to not only prevent equine abuse and neglect, but also to educate the public about equine welfare and help their staff and volunteers become better horsemen and women. Learn more about DEFHR‘s adoptable horses as well as their numerous education and volunteer opportunities. https://www.defhr.org. Keep up with Larisa and Starbucks’ adventures at https://www.facebook.com/rumoredeventing/.