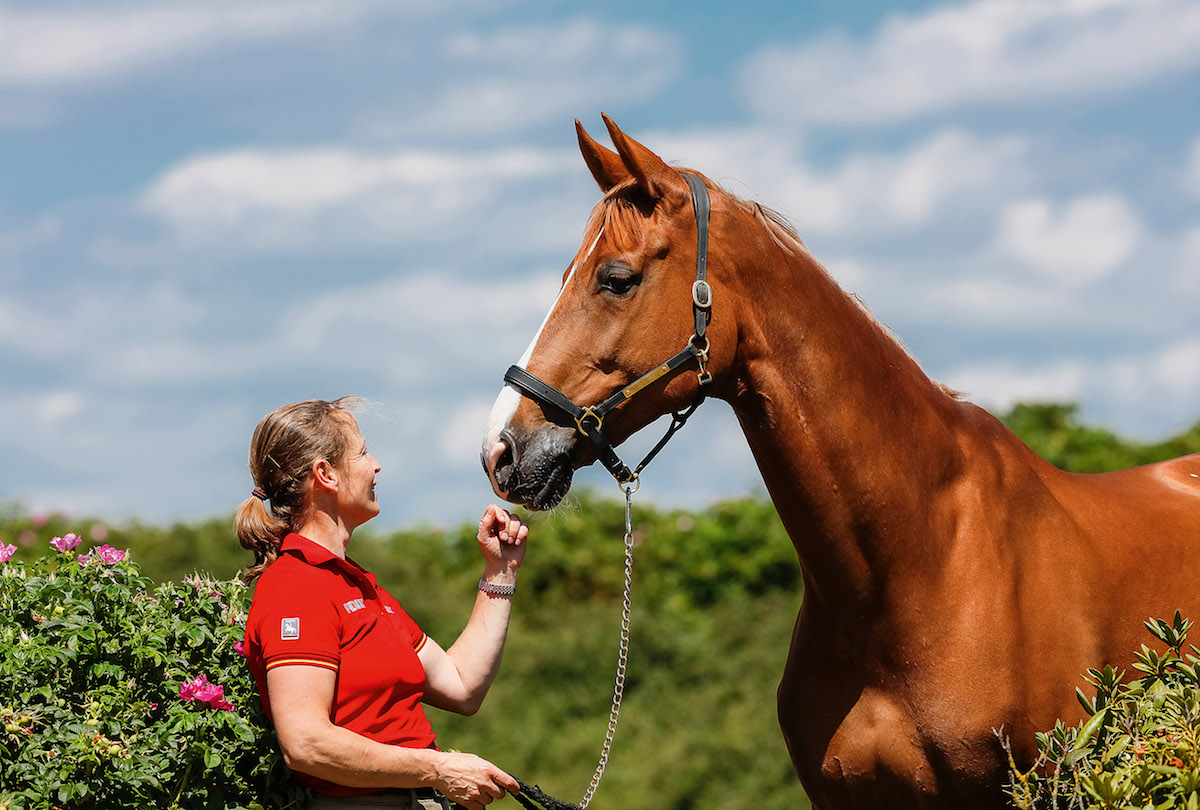 How many of us can describe the first time we saw our dream horse? It can be a little bit like falling in love. Sounds fade into the background, the light changes, time slows down for a second…. Of course, for the most part, the horses the majority of us are considering as riding partners aren’t destined to become become World Champions. But is the experience really any different for an Olympian? In her authorized biography Four Legs Move My Soul, six-time gold medalist Isabell Werth tells us about the first time she met her newest equine superstar, Bella Rose.

I saw Bella Rose for the first time when she was three years old.

Finding this horse had a somewhat complicated background: My employee Anna was friends with Matthias Bouten, the individual who took care of the young horses at the facility of a family of breeders named Strunk from Bochum, Germany. Anna had seen Bella Rose there and tipped me off, and so I went to Bochum one day to look at the mare myself. I still remember what it was like when I stepped onto the Strunks’ property. I went through the gate and down the barn aisle. To the right, a little entrance opened up into the indoor. That’s where I stood, chatting with the breeders, while watching with one eye through the door of the arena, where Matthias was longeing the young Bella Rose. The mare started to trot, and I was breathless. It was like electricity in my body. I felt like I had been zapped—it was incredible. It was a kick, an ignition, and I immediately told myself: “This is your horse.”

While I enjoyed the view of Bella Rose trotting past me, I was thinking, “Let’s hope this is not an illusion, directly followed by a fall from grace—some problem in the canter, some deal-breaker that will ruin my excitement.” But the horse went in walk, trot, and canter, and I tried to keep my facial features in check. This narrow, long-legged horse, the equine equivalent of a fashion model, had completely enchanted me. I knew that I had never met a horse like her and that I would also never find one again. And her name was Bella—the same name I was and still am called by some very close friends: Monica Theodorescu, former Olympic Champion and German National Coach, calls me Bella, as does Heike Kemmer, with whom I have ridden on the same team at numerous championships.

I made an effort to contain my euphoria. We left the barn as Matthias kept working the mare, and I was only capable of one thought: “How do I get this amazing horse?” All I said aloud was, “Interesting,” but Anna could read the truth in my eyes.

The breeders suggested a fair price for a horse of her class that had just been started under saddle, and I called Madeleine, who could already tell from my voice what was up. She didn’t even ask much about the mare, but only said, “Okay, go ahead.”

Of course, the Strunks knew that Bella Rose was a fantastic horse, but they might have not been aware of her entire potential. They did, however, ask to be allowed to present her at the annual Westphalian mare performance test. The German breeding associations award their permission for targeted reproduction at these events. In this case, however, their scores were slightly off. Bella Rose only received 6.5 points out of 10 for her trot. “Whaaat?” Madeleine asked. “What kind of animal did you buy there?” I just said, “Relax, Mado. This horse can never move in a way that she would only get a 6.5 for the trot. It would be like Kate Moss getting a D for modeling on the catwalk, or Michael Jackson a D for dancing.”

I didn’t care about the performance test scores. All I cared about was Bella Rose coming home to Rheinberg with me and spreading her charm in the dressage rings of the world. It was 2007, one year after Satchmo and I won the World Championships and time to build up the next “golden horse.” Bella Rose was one of those, I was sure of it—certainly, the best horse I had ever had. Not a day went by when I didn’t feel the fascination I first felt watching her all over again. Bella Rose was my horse, the culmination of everything I had experienced before…she was the perfect image, formed from the best puzzle pieces of all my top horses. She had Gigolo’s athleticism, and his commitment, willingness to move, and sportsmanship. She had Satchmo’s charm, flexibility, and his genius, but lacked his madness. And, just like Weihegold, she was not complicated at all and highly talented for passage and piaffe.

The best of everything.

When I first sat on Bella Rose, I felt almost apprehensive. I still don’t have words to describe the feeling. It was incredible. The freedom of movement she had in her shoulders and hind legs—the elasticity. It was a completely new feeling. It is ineffable how this horse could use her body. And then the canter: I could see her front legs flying. Bella didn’t only captivate you from the ground, she did so from the saddle.

This excerpt from Four Legs Move My Soul by Isabell Werth and Evi Simeoni is reprinted with permission from Trafalgar Square Books (www.horseandriderbooks.com).